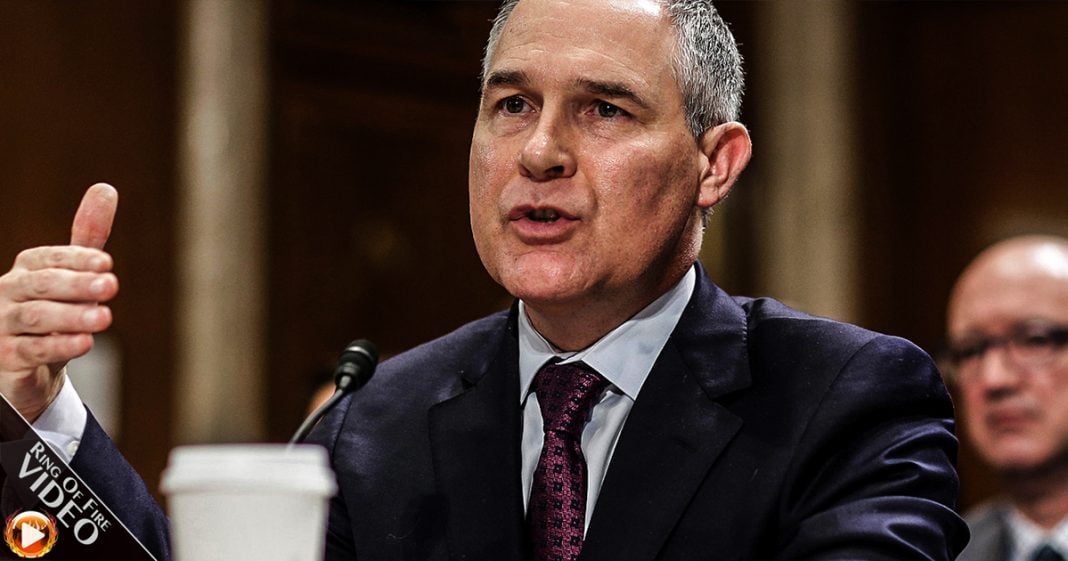 Scott Pruitt, Trump’s pick to head the EPA, said during his hearing this week that while he doesn’t think lead is safe for consumption at any level, he really hasn’t looked at any of the science on why its dangerous. Ring of Fire’s Farron Cousins discusses this.

During his confirmation hearings this week, Donald Trump’s pick to head the Environmental Protection Agency, Scott Pruitt, told Senator Ben Cardin that, “Hey, look, I really don’t know about the research that shows that lead is dangerous. I have not looked into that research.” Now, in his defense, Pruitt did say that he doesn’t think anybody should be exposed to lead. Okay, good enough, I guess, but here’s the thing … Mr. Pruitt, you want to head the EPA. As part of the EPA, you will have to regulate … I know you Republicans hate to do that, but you’re going to have to … drinking water. You’re going to have to make sure that you regulate and prevent chemical and heavy metal contaminants from entering drinking water that gets consumed by the American population. That’s part of your job. The Supreme Court has said that that’s part of your job.

The Supreme Court has also said it’s part of your job to enforce the Clean Air Act and make sure we’re not breathing dirty air. Yeah, you may think that you know that lead is bad, and it is. You may say that no level of lead is safe for anyone, which is true. Both independent research, government research, and the EPA, have said that there is no safe level of lead for Americans in the United States, especially children, but the fact that you haven’t looked into the science on it, is very concerning. You have to know these things. You can’t just say lead is bad. You have to know why lead is bad. It’s bad because it screws with brain development and ruins a person’s life, essentially. We have 26,000 children in Flint, Michigan right now who are suffering from the effects of the lead contaminated water in that city. 26,000 in just one city.

Think about this … Reports from December showed that there are over 3,000 locations in the United States where the levels of lead contamination are actually higher than those in Flint, Michigan. The only reason we know that there’s 26,000 lead contaminated children in the City of Flint, Michigan, is because people started to study to study it, and test the blood levels of these kids, once we found out about the problem. We do not have the money as a country to go around to these other 3,000 locations with higher levels of lead than Flint, and test all those children, and find out how many kids we’ve screwed up because we can’t afford to replace water pipes. I take that back. We choose to not afford to be able to test these kids. We choose to not be able to afford to replace water pipes. Do you know why? Because, Republicans, like you Mr. Pruitt, decided that it was a better idea to give tax breaks to the millionaires and billionaires instead of protecting the people of this country.

Do you think anyone, other than the Walton family that owns Walmart, cares more about the Walton’s getting a tax break than they do about drinking clean water? They don’t. Do you think there’s anyone in this country who cares that it’s more important for Donald Trump to get a tax break than to test our children for lead poisoning because we know that they’ve been exposed? That’s how this country works right now and it’s disgusting. We are so concerned with giving more money to rich people than we are about making sure that we’re not ruining children’s lives because they don’t have clean water. Think about that. Clean water is less of a priority in the United States than giving 400 families a tax break, than giving the top 1%, 5% a tax break. Buying military jets that we don’t need is more important than replacing water pipes to make sure we don’t poison 300,000 people in one city.

That’s what Mr. Pruitt needs to understand. That’s what he should have been asked during those confirmation hearings. I know he doesn’t have any bearing on tax policy, but we need to know what he thinks about that if he wants to head the EPA. Because, the EPA is only as powerful as Congress lets them be. If Congress does not give them any money because we’ve given all the money to millionaires and billionaires, then it doesn’t matter what Scott Pruitt thinks about lead poisoning. Because, he won’t have the money to do a single thing about it.