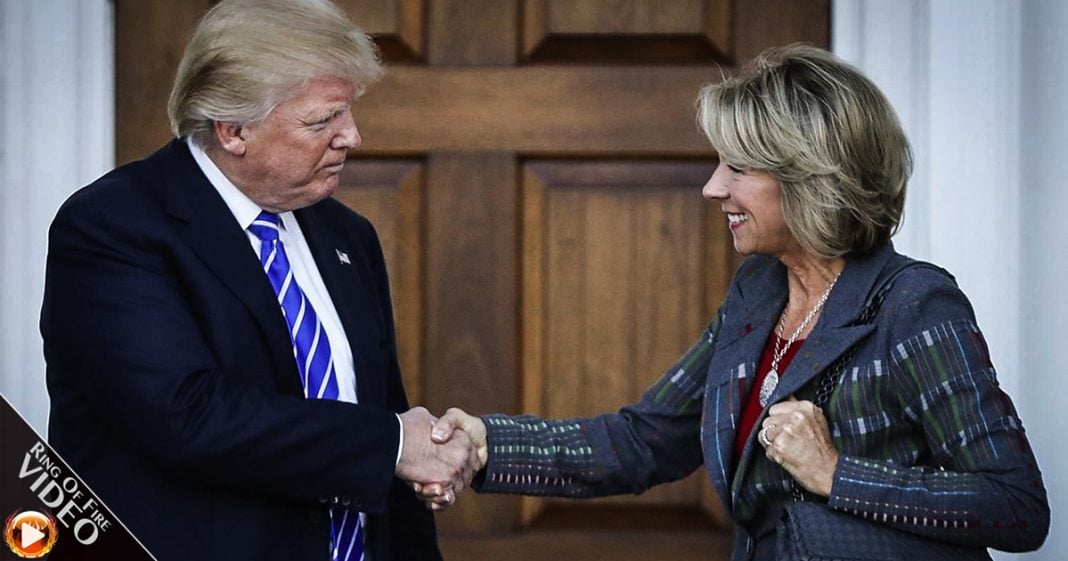 Betsy DeVos, the billionaire who will likely be the next Secretary of Education, has stated that schools in this country should move closer to becoming “God’s kingdom,” a remark that not only goes against the U.S. Constitution, but one that shows she is dangerously unqualified to serve as the head of Education in this country.  Ring of Fire’s Farron Cousins discusses this.

Much has been written about Betsy DeVos’s devotion to private charter schools, and her desire for the federal government to fund these charter schools. Betsy DeVos is Donald Trump’s pick to serve as Secretary of Education. She married into the DeVos family, has a net worth close to five billion for that entire family, which she is a part of. This woman, who has lived a life of privilege, is a known billionaire, believes that the federal government should be funding private schools. We should offer vouchers for kids in public schools to go over to private schools. She just thinks that private schools are better.

That’s bad enough, but here is the terrifying thing that almost no one is talking about about Betsy DeVos. Mother Jones did a phenomenal in depth piece on this, and here it is. In addition to being a charter school advocate, Betsy DeVos is also an extremely devout Evangelical Christian. She has not talked about her religion very much at all in the public sphere. However, Mother Jones reported that in 2001, DeVos and her husband, during some kind of event, were on record as saying that, “Our desire is to confront the culture in ways that will continue to advance God’s kingdom.”

That specific quote was talking about the culture of the United States. It talked about education. They’ve talked about all sorts of things here, continuing the creation of God’s kingdom here. In her position, as the head of public schools throughout the United States, DeVos could use that position to make public schools into a part of what she believes is God’s kingdom. Here’s why this is terrifying. First of all, it is expressly forbidden by the US constitution. We have the whole separation of church and state thing, wherein the state will not provide any funds that props up one religion over another.

It does not mean that schools cannot mention religion, as some people do think. It means that schools cannot use federal money to prop up one religion over another. Essentially, you have to give everybody equal time if you’re going to talk about them. DeVos would easily break that First Amendment in her quest to make public schools into part of God’s kingdom. To be honest, at this point, there is very little that we, the public, can do about this other than stand up and discuss it. That’s why it’s so disappointing that so far this issue has been left out of the public conversation.

Yes, it’s horrible that she wants to use public funding to pay for private schools. It’s even more terrifying that she wants to indoctrinate everyone’s children into part of her God’s kingdom. That’s not what we signed up for when we started sending our kids to elementary school. That’s not what most Americans want. As it turns out Mrs. DeVos, most people in this country, in this planet actually I should say, do not subscribe to your religion. If we want to teach our kids about religion, we will do it on our own time.

Aren’t Republicans the ones who say that we need to take personal responsibility? This is one of those issues. Do not force your religion on anyone else’s children. If you want to believe that stuff, good for you. Go to church every week, tithe, give your money, do what you want to do. Do not force anyone else, and do not look down on anyone else if they do not choose to do the same thing. That’s their decision. Those are their children. We do not need some billionaire heiress, who’s lived a life of privilege, sitting in Washington, D.C., dismantling public education, and forcing this horrible religious belief that DeVos and most Conservatives have that God is some kind of anti-gay, pro-gun, omniscient being looking down on us and judging us because we accept all people.

That’s not what God is about. I have spent several years in my youth in Catholic school, went to Sunday school, served as an altar boy for a while. That was never in the Bible, folks. Wasn’t there. God never said, “Hey, screw this particular group of people.” Jesus certainly didn’t. You look in the Old Testament, you find some really crazy stuff. If you want to enforce that, then you got to enforce the don’t eat shellfish, don’t wear mixed fabrics, women are not allowed to speak in church ever for any reason. That’s in the Old Testament, too. Until these religious fundamentalists like DeVos, who want to force certain parts of religion on us, decide that they’re going to enforce all of it upon themselves first, do not attempt to indoctrinate our children into your close-minded, bigoted religion.