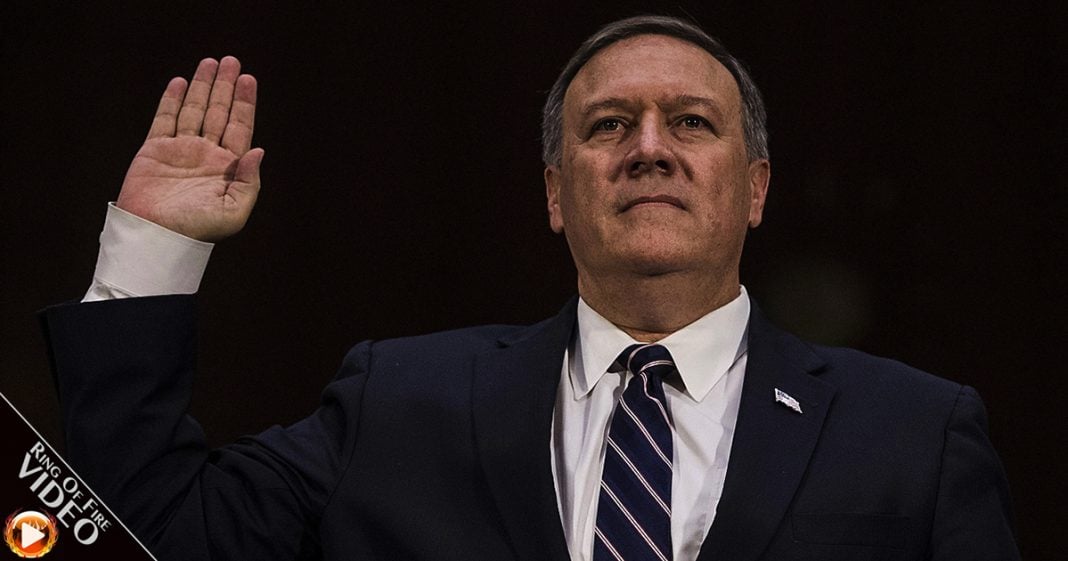 Rep. Mike Pompeo, Trump’s pick to run the CIA, said during hearings that climate change is not a concern for the CIA, a comment that is directly at odds with what the agency has been saying since at least 2006.  Pompeo is an oil-funded congressman, and he’s going to bring that anti-science, pro-industry background with him to the CIA. Ring of Fire’s Farron Cousins discusses this.

Transcript of the above video

Representative Mike Pompeo is Donald Trump’s pick to head up the CIA. During recent questioning for his confirmation hearings, Pompeo continuously refused to address any question given to him related to climate change. Now, the reason he was even being asked about climate change is because for several years The Pentagon and the CIA have said that climate change is a massive national security threat to the United States. They have been saying that since the George W. Bush administration. A lot of people don’t even realize that, at the end of his administration, George W. Bush actually did accept the science that climate change was real. CIA said the same thing during the Obama years, but now we get Mike Pompeo coming in to tell us, “I’m not going to answer questions about climate change because I am going to be ‘unique and different.'” That is how he described how his role at the CIA is going to change compared to his predecessors.

He says that he’s going to focus on the warriors, that is the word he used, keeping America safe. Mike Pompeo basically told us, if we distill his words, that climate change doesn’t matter. It’s not the job of the CIA to keep America safe from any of that if it’s even real. What is the job of the CIA is to get behind these American troops and give them the push they need as they go off and die in a war for god knows what. That’s what Mike Pompeo is telling us in these confirmation hearings.

What are we going to do when we suddenly have 10 to 20 to 30 to 100 million displaced climate refuges trying to get through our borders or trying to get through Europe’s borders, trying to get somewhere where they can continue to live because their homes are under water? We are not prepared for that kind of situation. The CIA is supposed to address things like that.

Now, the second part of what Pompeo has to say, that he wants to stand with American warriors. Warriors? This isn’t fucking old time Rome. These are soldiers. These are people’s children, somebody’s mother, somebody’s father. They’re soldiers meant to protect the United States, not to go out and fight wars of aggression that Mike Pompeo dreams up or that Donald Trump dreams up because somebody insulted him on Twitter. That is not what these people are. These are human beings. Mike Pompeo is already ready to send them to die for no reason.

Pompeo has escaped a lot of media scrutiny and that’s a shame because this is a guy with a very checkered past, a very short history in the United States House of Representatives. In the four years that he’s served though, the Koch brothers have been his biggest campaign funder, almost doubling his second next funder, which is actually the health insurance industry. That’s the kind of guy Pompeo is. He wants our kids, our parents, our cousins, our brothers and sisters to go out and fight these wars and die because they’re warriors but forget about climate change because that’s not really the job of the CIA. He’s saying that because of all of this money that he’s getting from the fossil fuel industry from the Koch brothers.

This is even more terrifying than just a regular cabinet position because, as head of the CIA, he does have a direct line into the president’s ear about matters of national security, about matters of international security. Pompeo is a guy essentially with his hand on the trigger. If his hand is not on it, he sure as hell is in Donald Trump’s ear telling him when it’s time to pull that trigger.