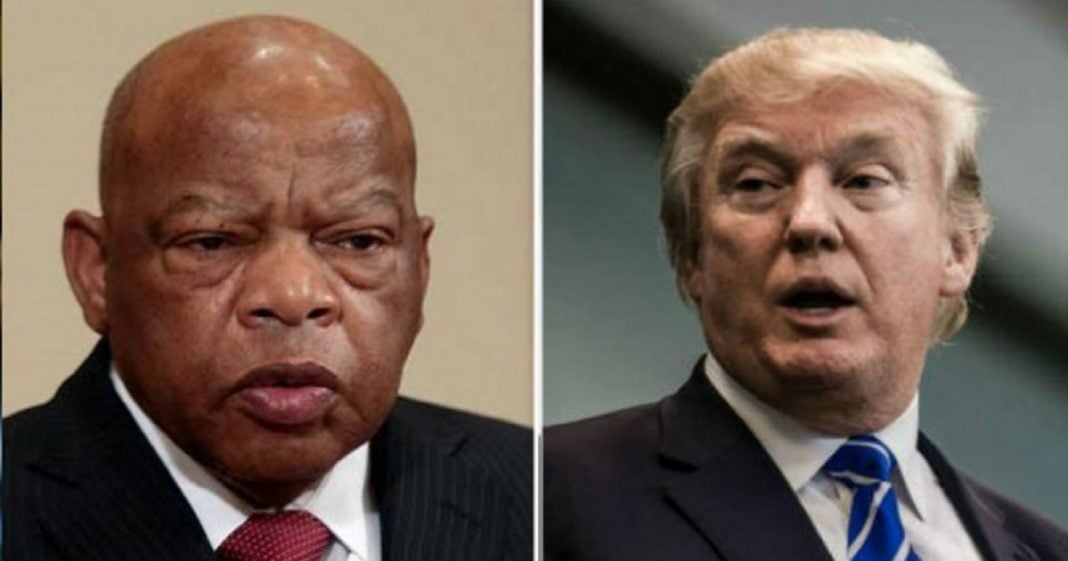 As usual, rather than letting the controversy die, President-elect Donald Trump has escalated his public feud with civil rights activist and congressman John Lewis. This time, tossing in some racist language implying that Lewis was not doing a good enough job controlling his people.

For far-left activists, John Lewis is not a perfect man. Many remember not-so-fondly the time during the Democratic primary when Clinton-backing Lewis said that he didn’t remember ever seeing Senator Bernie Sanders at any civil rights marches, despite the fact that there was clear photographic evidence of Sanders’ participation.

But that mark on his record aside, John Lewis is a admirable man who should be respected by anyone who champions civil rights and equal treatment. At the very least, when it comes to issues pertaining to equal rights in the face of seeming insurmountable opposition, Lewis is a voice worth hearing.

Which is why everyone should have been infuriated that Donald Trump, in the midst of striking back at Lewis for declaring a boycott of Trump’s Inauguration, implied that Lewis should be spending more time worrying about the state of inner-cities instead of worrying about the president.

It has become incredibly clear that the only association Donald Trump has with black people is “violent inner-cities.” If he isn’t talking about the problems with places like Detroit, black people do not exist to him.

Which is why, when faced with opposition from one of the most prominent civil rights leaders, Trump’s only solution was to criticize Lewis for any and all crime.

Congressman John Lewis should finally focus on the burning and crime infested inner-cities of the U.S. I can use all the help I can get!

What excuse does Trump have for suggesting that Lewis should focus on “burning and crime infested inner-cities,” besides the obvious fact that Trump associates all black people with crime, inner-cities, and poverty?

Further proof if this is that when Trump needed to appoint someone to head the Housing and Urban Development, he picked his one black friend, retired Neurosurgeon Ben Carson. When Steve Harvey visited Trump Tower last week, it was he that Trump asked to assist Carson in dealing with inner-cities and urban development.

It is clear that Trump thinks that black folks should care for their own, and that the only realistic portrayal of Black America is living in a slum in the middle of a decaying city.

For the record, many inner-cities are flourishing centers of commerce. It seems like Trump visited a down-and-out inner city once in the 80s and hasn’t quite recovered from the shock. But many who live in these parts of the nation would assure the president that there’s not burning or infestations ongoing.

For the record, Lewis has not responded to this or any other attack from Donald Trump – likely because he is a sane and rational human being.