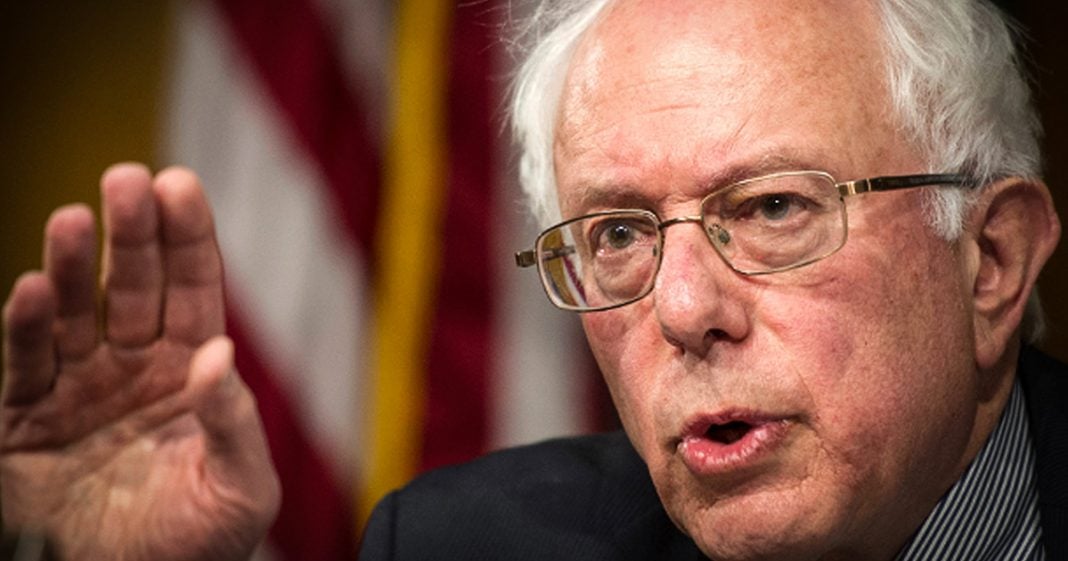 Bernie Sanders is not too happy about the fact that the Democratic Party killed his amendment that would have allowed the importation of cheaper prescription drugs, and he’s calling out the corporate Democrats who sold the American public down the river. And that’s a model that we all have to follow if we want to bring the Democratic Party back from the brink of disaster. Ring of Fire’s Farron Cousins discusses this.

Senator Bernie Sanders is angry and rightfully so. This week, 13 senate Democrats voted against an amendment put forward by Bernie Sanders that would have allowed the importation of cheaper drugs from Canada. We’ve discussed that. Today, Bernie Sanders is out there and he is calling out these corporate big pharma Democrats for voting against something that not only did he get bipartisan Republican’s support for, it’s something that Donald Trump supports, and it’s something that the majority of American citizens support. Bernie Sanders understood that. He knew that this is what the people wanted but, more importantly, he knew it’s what the people needed. These 13 corporate Democrats led by Cory Booker decided that it was better to side with big pharma rather than American patients and consumers.

Here’s the thing. Cory Booker is the number three recipient of money from big pharma in the last two years. He’s only been in the senate for two years. Number three recipient. He’s from New Jersey. That’s where a lot of the pharmaceuticals in the United States are made. Obviously, he wants to protect the interest of American pharmaceutical companies rather than the interest of American consumers. A lot of people have said that Cory Booker is a rising star in the Democratic Party. If that is the case, then you better get ready for eight years of Donald Trump’s presidency because it proves that the Democrats learned absolutely nothing, which shouldn’t be surprising.

It’s a good thing that Bernie Sanders is out there naming names and calling these people out because that’s what we’re going to have to do for the next four years if we want to save the Democratic party, if it’s even worth saving at this point. We need honest, progressive senators, representatives and politicians right now. We do not need anyone who is pro-corporate, anti-consumer up there calling the shots from Washington, D.C. far removed from their constituents who they have completely lost touch with.

This isn’t a partisan issue at this point. This is about protecting American consumers and the American economy. To hell with American corporations. They’re doing just fine. We can pass all the regulations, all the laws we want, and they are still going to make huge profits. We don’t need to worry about that anymore. We need to worry about the people who can afford their prescription medications. We need to worry about the people who are having to work two minimum wage jobs and they are still living in poverty. That’s who we need to worry about in this country and that’s what Bernie Sanders understands. Unfortunately, it’s what several Republicans who voted with Bernie Sanders understood. Now, I’m sure they have ulterior motives for supporting this legislation but at least they have enough sense to support it. Bernie Sanders is doing the right thing right now, and it’s something that all of us need to do for the next four years.

When a Democrat screws up and sides with the corporation over the American public, we’re going to call him out. Name the names and follow the money. They’re not going to be happy about that.