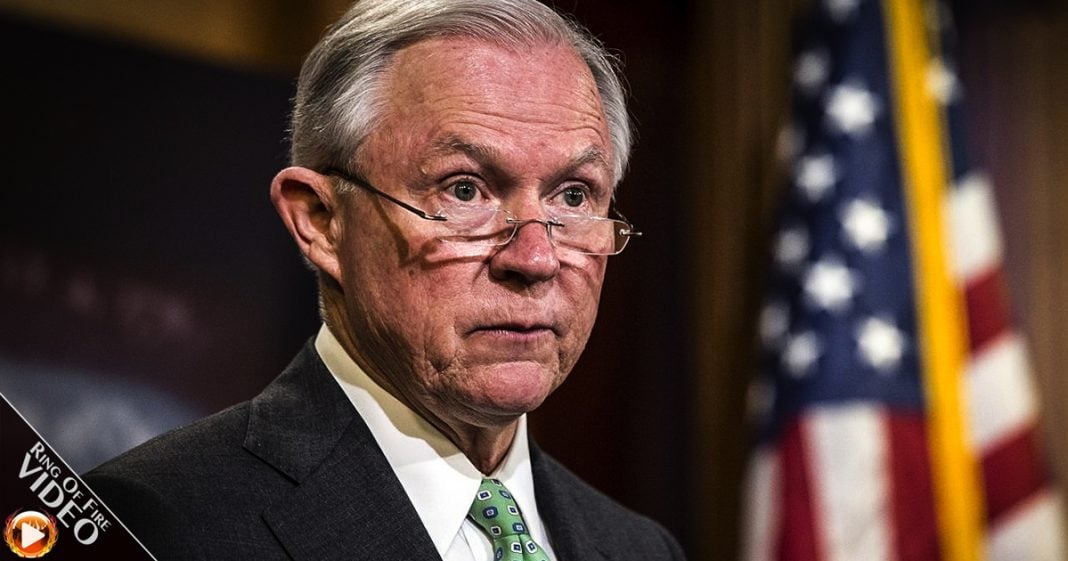 Most of the criticism of Trump Attorney General nominee Jeff Sessions has focused on his lifetime of racist statements and actions.  But that’s just a part of the Sessions story, and we also need to be concerned about the fact that Sessions is fervently anti-worker, anti-union, and anti-consumer, siding with corporations whenever possible. Ring of Fire’s Farron Cousins discusses this.

During the confirmation hearing of Jeff Sessions and in most of the media coverage of Jeff Sessions ever since Donald Trump had nominated him to be the next Attorney General, most of that focus has gone on Sessions’ racist history, his statements, his actions, all of which scream that this guy was clearly biased against any person of color in the United States, but what has flown under the radar and what is just as dangerous as Sessions’ racism is the fact that this man is one of the most corporatist Republicans in Washington D.C., and he proved that during his time as an Alabama attorney general.

Here are a couple quick facts. When he was attorney general of Alabama he refused to allow his state to join into the massive lawsuits against the tobacco industry for causing lung cancer and covering up all those dangers. A move that cost his state billions of dollars. All because he wanted to protect the tobacco companies. He did the same thing with a company called Morrisons, they were accused of basically selling watered down meat to the government under their federal contracts or state contracts as Attorney General Sessions refused to prosecute them, dropped the case, and then in his next reelection the company gave him $20,000 to run for reelection. He did the same thing with a company called Tyco, basically same thing. Rules in favor of the corporation that’s screwing over consumers and the government, drops the case, gets huge money. The list goes on and on. And that’s the problem with Jeff Sessions and to be honest, it highlights a big problem with the Democratic Party. Everything with the Democratic Party right now has to be some sort of cultural issue.

Now, I’m not saying that Sessions racism should not be discussed, it should, but also in that conversation we have to talk about the rest of it. Because the Democrats have tried having a conversation only about race and look what happened. Americans elected a racist president who is putting racists in his cabinet. So we’ve gotta attack on all fronts. The racism can be the first attack, and then after that we have to talk about the fact that Jeff Sessions is going to screw over American consumers at every possible opportunity. He did it in Alabama, he did it as a senator, and he’s going to do it as Attorney General of the United States. This is a dangerous man and again it goes far beyond the racism.

This is a man who’s going to give corporations everything that they want. And as angry as Democrats were that President Obama refused to go after the big banks for any of their crimes, think of how bad it’s going to be when Jeff Sessions is in charge of the justice department. There will be no corporate prosecutions. These big banks are going to get away with murder. Same thing goes for the pharmaceutical industry, the oil industry, every industry in this country is going to do phenomenally well under Attorney General Jeff Sessions and every consumer, every worker in the United States is going to suffer. This is a guy who tried to get rid of class action lawsuits at one point in his career. That’s how anti-consumer this guy really is. He doesn’t want you to be able to sue corporations, and if you do, you need to pay all that money out of pocket, you can’t join a big class and just pay after a verdict comes down, no, you’re gonna have to pay the money upfront, which he knows the majority of Americans can’t do, so corporations stay protected whenever they break the law.

That’s what we get under Jeff Sessions and that’s the conversation that we need to be having right now.