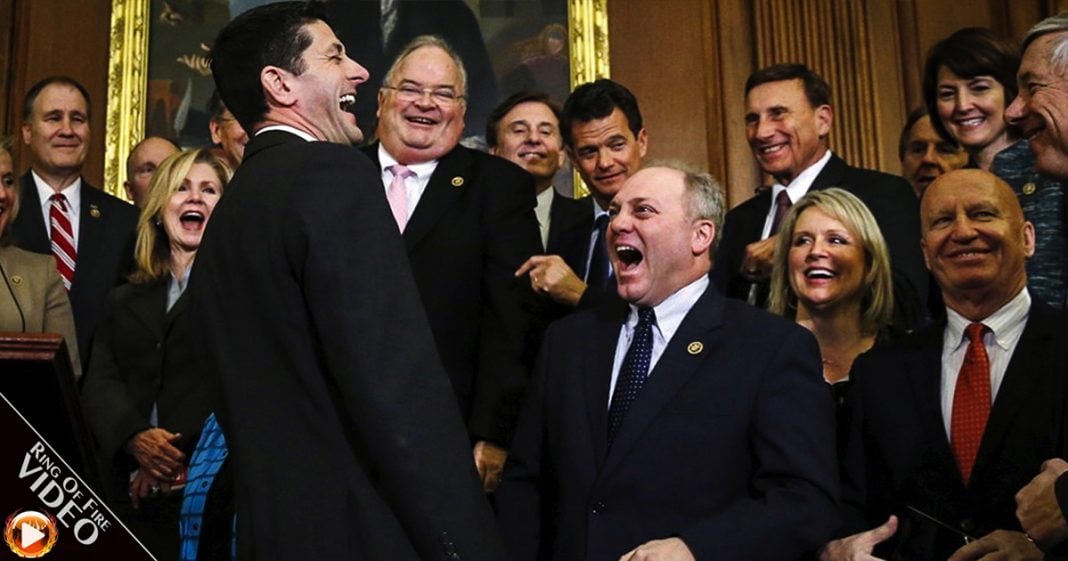 This week, Republicans in the House of Representatives passed the Regulatory Accountability Act, a measure that will give Congress the final say on all regulations coming out of agencies like the EPA and OSHA and even the SEC.  This gives Congressional Republicans unprecedented power, but it could come back to bite them once they are no longer the majority Party. Ring of Fire’s Farron Cousins discusses this.

Republicans in the House of Representatives this week, when they weren’t trying to repeal Obamacare, they decided to pass the Regulatory Accountability Act, which essentially says that the President Regulatory Agencies, like the EPA, OSHA, FDA, the SCC, they cannot enact any regulations for industry unless those regulations are first approved by Congress.

Now, groups like the Heritage Foundation or Freedom Works are toting this as a massive victory because it restores the separation of powers, but I don’t think they understand what separation of powers means because what you did, what you advocated for, what the Republicans just did, was consolidate powers. It didn’t separate anything. Things were separated, you idiots. It gave that power to the Republican-controlled Congress.

I’ll throw out some examples here. If the EPA, like their Clean Power Rule, they would not be able to implement that rule or pass a similar rule or any rule at all unless the House of Representatives and the Senate approved it first. If they vote it down, that law is dead.

The same thing goes for OSHA, for work place protections. If the Republicans vote it down, that rule is dead. Corporations win, consumers lose. It’s the standard Republican operating procedure here. FDA. If they want to impose stricter standards for testing on pharmaceuticals, well, the House and Senate vote it down. Not going to happen.

This is the America that we’re living in today. These Republicans who are so drunk with power in both the House and the Senate have decided that the federal government, the Executive Branch, is going to lose power. That power is going to go to those Republicans, but here’s the catch.

I don’t think Republicans are smart enough to understand this. They don’t have eternity to control the House and the Senate. Eventually, most likely in 2018, that balance of power is going to flip. What’s going to happen at that point is the Democrats are going to be in charge with a Republican President, who tries to pass some horrible regulatory things on his agenda, and the Democrats will have the power to vote it down.

The FDA has always had the ability to write these regulations. The EPA, the same thing. OSHA, SCC, rules for big banks. They can draft those and put them into effect. That’s how the government works. That is the separation of powers.

Republicans are taking that away. There will not be any rule, any law, in this country that passes on a federal level that does not get approved by Republicans for the next, at least two years, maybe even four years. That’s terrifying because from what we know about the Republican Party, 100% of the time, they are going to side with corporations. They’re going to side against American consumers and American workers and American unions and the environment, every single time.

We can go back. We can look at their voting records. We can look at their records in the private sector. We know this is true. Now, by stripping these government agencies of essentially the only authority that they actually have, they have consolidated all of the power in Washington DC into Congress. Republicans, in Congress, have all of the power in this country right now and it’s only going to get worse next Friday when Donald Trump gets sworn in.

This is terrifying. This is a story I can promise you you’re not going to see on the mainstream media. You’re not going to see it on many websites either because it’s a complicated story and people don’t understand it. If Republicans really cared about this country, they would not gut regulatory agencies.

Study-after-study proves that regulations have economic benefits. They benefit the economy more than not having regulations. Talk about it in those terms. Forget the fact that it protects workers in the environment, it helps the economy, but the Democrats won’t do that and that’s why the Republicans have consolidated all of the power, so that for the next two years, they literally can do whatever the hell they want.