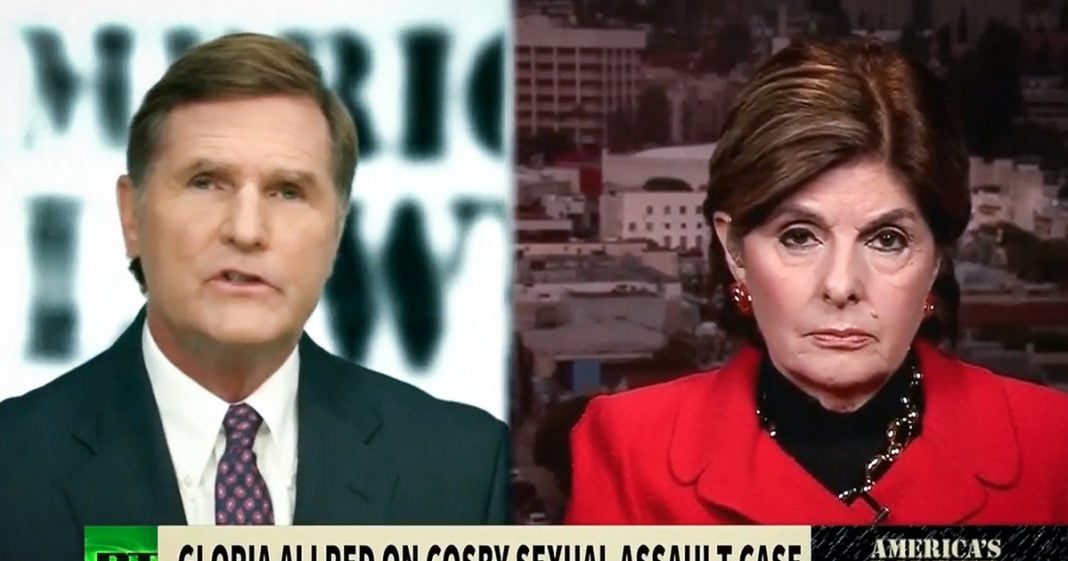 Via America’s Lawyer: At least 58 women have come forward with accusations that comedian, Bill Cosby, raped or sexually harassed them over a period spanning five decades. So far the only criminal case against Cosby that’s moved forward involves Andrea Constand, a former employee of the Temple University basketball team, who claims Cosby drugged and sexually assaulted her in his home in 2004. Mike Papantonio discusses this with attorney Gloria Allred, who represents dozens of Cosby’s alleged victims.

Papantonio: Gloria, if the claims are true, how has Cosby been able to keep this predatory behavior for so long? How has he successfully done that, which he absolutely has?

Allred: Hi, Mike, and thanks for inviting me. Also, I want to add that yes, that is the only criminal case that is pending against Mr. Cosby; however, there are also several civil lawsuits filed against him. For example, I’m litigating a case on behalf of Judy Huth, who alleges that, in her lawsuit, that Mr. Cosby sexually assaulted her, committed an act of sexual misconduct against her when she was only 15 years old at the Playboy mansion. That’s an allegation of child sexual abuse, and we are litigating that.

Having said that, to answer your question directly, many of the accusers did not file a police report with law enforcement, did not proceed to assert their allegations or claims against Mr. Cosby in any civil lawsuit, and for many of them, and I do represent many of them but not all, they believed that, in fact, no one would believe them or they were in fear of making any allegations against Mr. Cosby because he was rich and powerful and famous and well-respected type of father figure, which is what he portrayed in his television persona. They feared that they would suffer repercussion or retaliation by either Mr. Cosby or his supporters if they made such claims against this celebrity. That is, in fact, what they allege is the reason that they did not come forward earlier or they may also have felt that somehow they were responsible, blamed themselves, as often victims do even though they were not, in fact, responsible for what happened.

Allred: In terms of the common plan, scheme, or design, which is what the prosecution in the criminal case has alleged in their motion, because that motion is filed because they want to have 13 other accusers other than Ms. Constand be permitted by the court to testify in the criminal case in order to prove a common scheme, plan, or design or an absence of mistake by Mr. Cosby. In terms of that the allegation by the prosecution is that he wasn’t mistaken about whether Ms. Constand consented to sexual contact with him because if in fact, he had a common plan or scheme of drugging women or incapacitating them through alcohol or alcohol and drugs, then he would know that they couldn’t consent to sexual contact if in fact they are incapacitated, unconscious, unable to say no. That’s an interesting issue that the court will soon decide that is whether other accusers, all, some or none of the 13 that the Prosecution would like to have testify at the trial will be, in fact, permitted to testify. We expect that decision probably in January at some point.

Papantonio: Well, Gloria, over the years you’ve had such a huge impact on women’s rights cases similar to this, just like this in many regards, but in this case you actually … I think some of your work actually changed the law in California where they changed the statute of limitations. They were able to make some positive changes to where women could bring these cases because so many times statute of limitations on rape cases it’s impossible for the victim to really come forward because they’re excluded, the case is excluded. Your work has been successful in changing a lot of that. What’s your take on that issue in general, the use of statute of limitations on rape cases?

Allred: The statute of limitations in the United States is for allegations of sexual assault or rape is different in every state and is different for criminal versus civil and is different if it’s an allegation that an adult was sexually abused or that a child was sexually abused. To make it very, very simple, what we’ve done is we have gone to various states ever since this Bill Cosby situation developed and many of the accusers say that it’s too late now for them to do anything and therefore they can’t do anything of a legal nature. Although, of course, there’s no statute of limitations in speaking out against what is perceived to be injustice. We’ve gone to Colorado. We’ve gone to Nevada. There we were successful with the huge assistance of some of the accusers and we have been able to change the law to lengthen the statute of limitations, the time period for criminal prosecution of rape and sexual assault.

After that, we went to California. We testified in the legislature. I met with some of the governor’s representatives, and many of the accusers, some of whom I represent, also testified and spoke out, and because of their courage we were able to go for what I call the whole enchilada. We didn’t want to extend it in California for criminal prosecution; we wanted to eliminate it. We have been successful. I give a great deal of credit to the accusers, and also to our governor, Governor Jerry Brown, who had the vision and the foresight and understood how important it is to eliminate that statute of limitations in the future for criminal prosecution of rape and sexual assault, and he signed the bill into law.

Papantonio: Well, I got to tell you that in a David and Goliath combat scene I’m going with you every time.

Papantonio: Gloria Allred, thank you for joining me. Good luck out there. You’ve made such a huge difference in your career already, and this is an important case. Thanks for joining me.

Allred: Well, thank you. We’re 40 years for women’s rights. We’ve been fighting for them, and we’re going to continue for as long as God gives me this gift of life. Thank you.