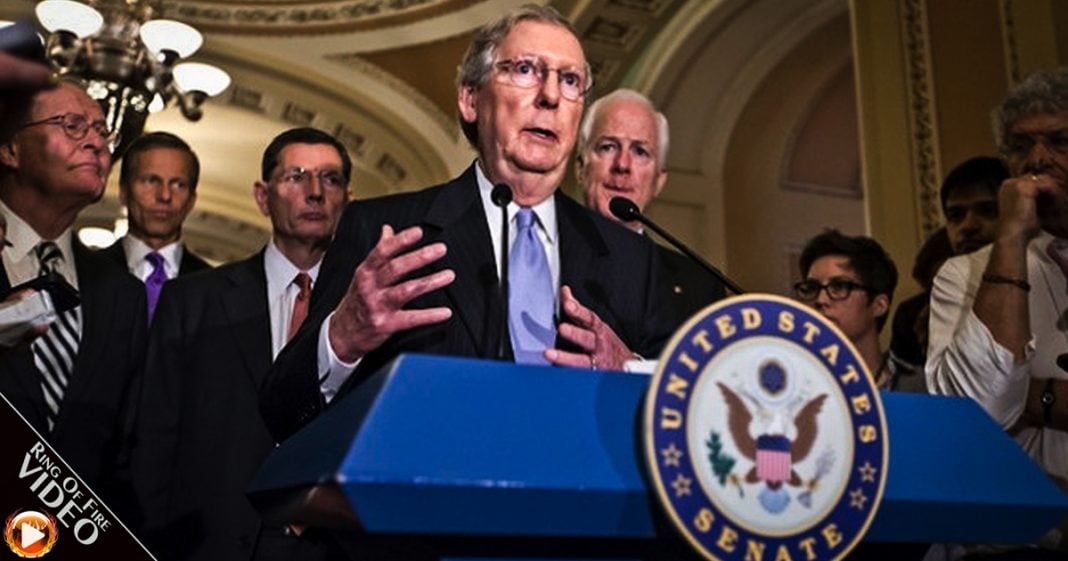 At 1:30am Thursday morning, Senate Republicans took a step forward towards repealing the Affordable Care Act, in a process known as a “vote-a-rama.” They are now one step closer to forcing 22 million US citizens to go without healthcare. Ring of Fire’s Farron Cousins discusses this.

Early Thursday morning, in fact at 1:30 a.m., senate republicans held a vote whether or not to repeal certain parts of the Affordable Care Act or Obamacare. Well, that measure passed and now those individual pieces of Obamacare are going to go to their individual committees where republicans will draft legislation, include these in various budget bills to try to pick apart the legislation piece by piece. Now, here’s why this story is important. I know we’ve talked a lot about republicans trying to repeal the Affordable Care Act, but here’s the thing, they did this at 1:30 in the morning while most Americans were at home sleeping, republicans were in Washington DC trying to take away the healthcare from 22 million American citizens because they did attempt and so far have been successful in taking out the preexisting conditions clause that was one of the best parts of the Affordable Care Act.

Paul Ryan’s plan over in the House of Representative does include a pre-existing conditions clause and in fact most of the good things about Ryan Care are actually identical to Obamacare. Again, though, Republicans did this middle of the night, early in the morning when no one was paying attention and they only did this so that they could give the wealthy in this country a tax break because if you remember a lot of the subsidies in Obamacare are paid for by a modest tax increase from people making more than $250,000.00 a year. That’s what’s behind this Obamacare repeal is Republicans wanting to give the wealthy an even bigger tax break. That is the only reason for this.

The pharmaceutical industry loves Obamacare, the health insurance industry loves Obamacare, as it turns out the majority of the public, while they agree that the bill is flawed, they do enjoy having health insurance. It’s republican congressman who are obsessed with repealing this. In fact, there’s a lot of republicans online right now saying, “Yeah, we should repeal Obamacare, but just leave the Affordable Care Act in place because I like that.” They don’t even realize that they’re the same thing, just a different name. Republicans who don’t like Obamacare don’t like it because it was passed by a black democrat. That’s what American citizens, that’s their thought process on that.

In Washington, it’s because they want to give a tax break to the rich. Tom Hartman actually did a phenomenal segment on that yesterday talking about all of these republicans who do not know that Obamacare is the Affordable Care Act. That’s what we’re face with here, folks. This is a massive misinformation campaign that’s been going on for six years, but let me tell you what hasn’t been going on for six years. Since day one of this piece of legislation getting signed into law, republicans have wanted to repeal it. They’ve been doing so or trying to do so for six years and in six years, those idiots haven’t been able to come up with any form of replacement whatsoever. I mean, Paul Ryan has a couple of talking points on the issue, but it’s not a full plan. It’s not legislation. Six years and these morons haven’t even come up with a single page on what to replace Obamacare with.

That’s the scariest part. Not that they don’t have a plan, but that they’re not smart enough to come up with a plan after six friggin years. How much more pathetic can you get? I mean, these guys are going to repeal Obamacare. They’re going to take healthcare away from 22 million Americans and they have nothing to replace it with. Rand Paul was the only republican with enough courage to stand up and say, “Listen, I’m not gonna vote to repeal this thing til you have a replacement ready to go the second we repeal this.” The only one, Rand Paul. Scary, huh? It’s scary to think that Rand Paul might be the smartest or most compassionate republican in the senate. But that’s what we’re faced with here. If Rand Paul is the standard that all other republicans need to look up to, we’re in serious trouble in this country.