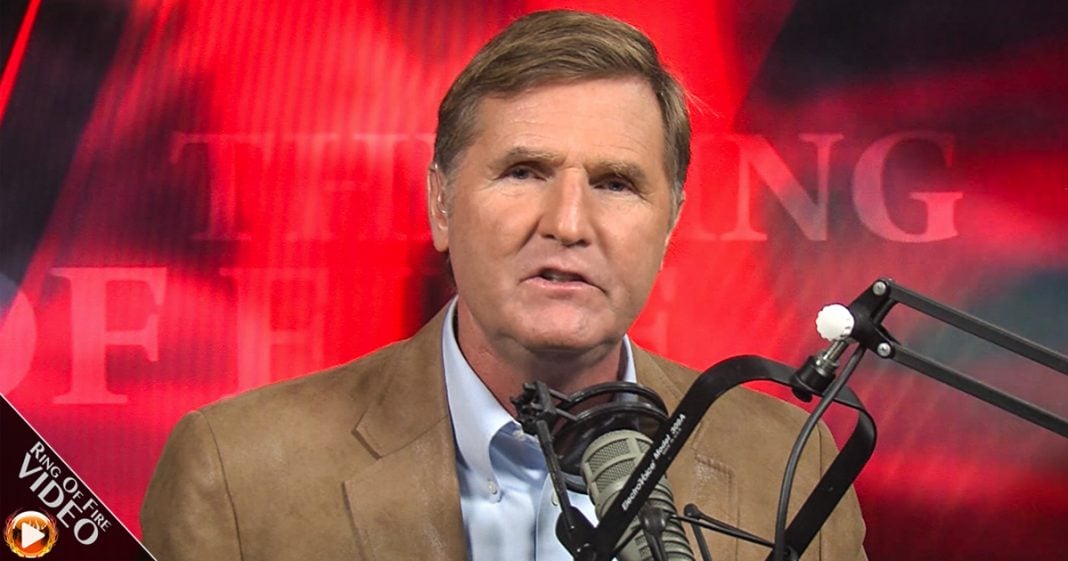 Ring of Fire’s Mike Papantonio & Sam Seder discuss the inability of the mainstream media to tell stories that keep US citizens safe, and why an outlet like RT America is the only place left for the truth.

Sam: Pap, when we broke, we were talking about our friend Bobby Kennedy and how the press jumped all over him, labeled him an anti-vaxxer, and while I have some disagreements with him about the vaccination issue, he by no means considers himself against vaccinations. You’ve said yourself his kids are vaccinated. I want to add to the litany of things that you talked about in terms of what Bobby has done. We are just, I don’t know, 20-some odd miles, maybe 30 miles at most from the Indian Point, a nuclear facility, which has been an aging facility. People have been worried about it from both a safety perspective and a security perspective, and he has worked tirelessly to get that plant closed and Andrew Cuomo announced earlier this week, maybe it was end of last week that Indian Point is going to close within the next five years, maybe even quicker than that.

The litany of things that we, that Bobby has worked on that have been incredibly helpful and are indicative of his level of commitment and seriousness and foresight cannot be denied.

Pap: Sam, let me ask you this. I really want to know what’s your take on this is. What has happened with our ability to have a conversation about something as important as whether or not our children are safe from any particular event or any particular threat, whether it’s global climate change, whether it’s vaccine, whatever it is. Why can’t we simply have a conversation? We’re getting emails to Ring of Fire. I got to tell you this, don’t dare, don’t dare write or email me or this news site complaining that you’re angry because Bobby is undertaking a simple process, very basic process of trying to find out if there’s a better way to protect the delivery system of a vaccine for children who might be under risk, not because of the vaccine but because the delivery system. Don’t dare tell me or anybody on the staff that he has anything but a true, true need to get to the truth here. He’s a soldier …

Sam: Well there’s no doubt, I mean look, this is the thing. I personally don’t think that the Trump administration, I don’t have any faith in their ability to do anything but it is indicative of Bobby’s dedication to this issue. I mean the idea of people questioning his, his intent here. I think people can disagree with the idea of whether or not you want to associate with the Trump administration.

Sam: Or whether or not it is dangerous to even question the vaccination regime that we have in this country. I mean, the truth be told to a large extent, when you get into a room with your doctor, there is some questioning that goes on for a large percentage of the country. It is — and part of that is a function like I said earlier of the way that we have set up from public policy decisions and I think from a health perspective, it is probably the right way but it’s a very difficult situation because it creates, it creates a lot of questions.

Pap: Yeah, Sam to me, you know what the story’s about is I’m tired of people with their intolerance about the need for discussion. That’s what it comes to — look, can you imagine this, now you have followed — we have been friends, what 20 years?

Pap: Oh God, before that. I mean we’ve been friends all the way back to Air America. I have been nothing but so far left that it makes most people’s heads spin where it comes to very progressive issues. I don’t think you’ll ever identify anybody further out there to the left than me when it comes to people’s rights, how we treat people, people’s health, how we ought to treat each other, you name it. I’m there on those issues. I start a program called America’s Lawyer and it happens to be on Russian television. All of a sudden, I get these idiots, ‘Mike Papantonio is now with Putin.’ I mean really? Honestly? First of all, they even make the accusation, ‘Well you must need the money.’ No, I don’t need money. I’ve got all I can spend in a lifetime, but the point is, here’s the point, Sam. The only place I can tell the stories that I tell on America’s Lawyer, the only place left is RT America. You know why? Because I’ve done, I’ve been on MSNBC. I know I’m not going to attack them. I know you’re a contributor but I’ve been there to.

Pap: Comcast, okay. Do you realize the number of times they would not let me tell a story, that I couldn’t tell a story about a product that’s killing people? I can tell the story on RT. Do you realize the time I wanted to talk about Wall Street and the crimes of Wall Street and I had to tone it down if I was on Fox, which I was or if I was on CNN, which I occasionally was or if I was on MSNBC. I had to tone it down. I couldn’t tell the truth because the corporate media fat cats on the 50th floor were afraid their advertisers would get mad. These boneheads write me, critical of me because I want to tell the stories in a place I can actually tell it, which is RT America, which has by the way, never told me I can’t tell a story even if I’m talking about Russia, even if I’m talking about Putin, even if I’m talking about Crimea.

That’s the real truth behind this whole thing. I’ve almost started discounting these boneheads who write Papantonio, Putin and Putin Network. Really? You wait until your child is affected by a product that causes brain damage, which we’re trying, which we tried to take a story out three years ago and we couldn’t tell it in corporate media but we can tell it on RT America. That’s the new America. That’s what we’re looking at. If you’re not outraged about it, you’re a damn idiot.

Sam: I will say, just the — there’s an anti-Russian fervor, which I mean I’m no friend of Russia and I have no doubt that there’s been attempts to influence our elections but the idea, I mean look, the bottom line is regardless of what anyone says, there is a fundamental difference between the President of the United States and the way that they relate to Russia than someone who is commenting on corporate malfeasance on a television program, and I don’t know why that’s hard for people to understand but …