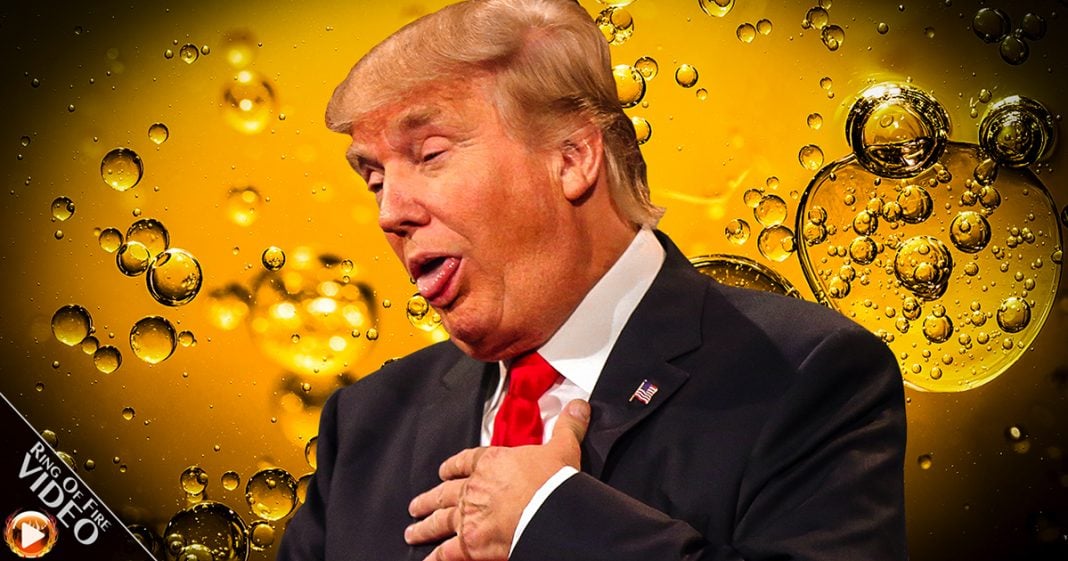 Buzzfeed published an alleged intelligence document claiming that the reason Donald Trump is so beholden to Russia is because they have evidence that he hired prostitutes to urinate on him. There’s no real evidence to support this, but the story did make Donald Trump lose his mind on Twitter. Ring of Fire’s Farron Cousins discusses this.

Yesterday evening, Buzzfeed News posted a 35-page PDF dossier that allegedly was conducted by a former UK spy, essentially detailing the ways in which the Russian government really owns Donald Trump, but more so that they are blackmailing Donald Trump to do everything that Russia wants them to do. Now, the funny part of the report, again, this report has absolutely not been substantiated. There is no hard evidence. It’s anonymous sources. There’s nothing that leans towards this report being anywhere near the truth. Having said that, the report tells us that Donald Trump’s the kind of guy who likes to be peed on. There’s no delicate way to say that. According to this report, Donald Trump, while in Russia, hired a couple of prostitutes to come into his room and urinate on him. Look, I’m not here to judge anybody’s sexual fetishes or fantasies or what have you.

Again, there is a 99.9% chance that this story is completely false, but that didn’t stop Donald Trump from having an absolute meltdown on Twitter following all of the people making fun of him on Twitter. Usually I would say that, “Look, it’s not nice to make fun of anybody,” but this guy, Donald Trump, absolutely deserves it. You know, this is his comeuppance. For all the talk that he’s done about the media making up stuff, well, now they’ve pretty much made up something that he now has to address. Whether it’s true or not, Donald Trump is going to become the Pee President. That’s what people are going to remember, and you know what? Again, he deserves it. He is the guy who pushed the Barack Obama birth certificate story. He helped push other false narratives about Barack Obama, about Hillary Clinton, all kinds of things that Donald Trump absolutely made up out of nowhere, and now he’s finding out what it’s like to be on the receiving end of such a report.

The big thing though is that people are saying, “This is what proves that Donald Trump is absolutely being blackmailed by the Russian government,” and again, there is no evidence to support that. If they had this kind of video, that probably wouldn’t even take down Trump’s campaign or even damage him personally. Let’s not forget about all the horrible remarks that did come out from Donald Trump: the leaked tape of him saying that it’s all right to grab them by the you-know-what, so I don’t think this would hurt him. Even if such a video existed, it would not take down Donald Trump. That is not enough to blackmail this man.

The important thing to take from this is that Donald Trump, it is so easy to get under his skin. That is what the entire Twitter universe is doing right now, so keep it up. If there is a human being that deserves this kind of torture, it is Donald Trump.