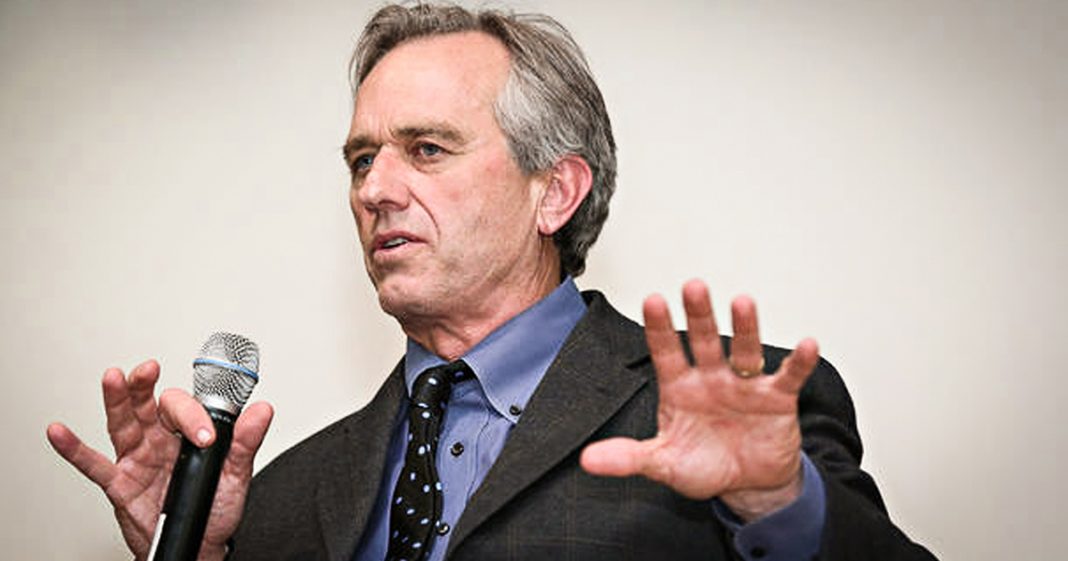 Ring of Fire’s Mike Papantonio lays down the truth on the dysfunctional corporate media’s attacks on our own Robert F. Kennedy, Jr.

In the last election, the split between progressives who supported Bernie Sanders and Democrats who supported Clinton, reached a point that neither camp is taking the time to honestly evaluate the good ideas and the bad ideas with any degree of fairness.

Yesterday, I saw that same type of stilted narrow thinking play itself out in regard to Bobby Kennedy being appointed to a governmental committee that had a goal of figuring out how to improve the delivery system for childhood vaccines.

The pharmaceutical industry organized immediately and began calling Bobby Kennedy an anti-vaxxer. They knew when they said it that it was a lie, but they counted on the fact that people have become unwilling to honestly assess what is happening in political settings that involve any level of controversy. The truth is Bobby is not an anti-VAXER as he has said so many times on his own website; he is pro-vaccine, but he has a belief that the delivery system for vaccines may be causing harm to your children. So for years, with incredible pushback from both the CDC and the drug industry, Bobby has taken it upon himself to better understand how a vaccine can be delivered in a way that does not include Thimerosal Mercury.

God forbid he should ask questions about whether or not high levels of mercury are causing any type of injury to our children. The truth is the issue has never been about whether or not to vaccinate children – that is a good, solid idea. It prevents illness and disease. But that doesn’t mean that the delivery system for that vaccine cannot be improved, and that is what Bobby has dedicated himself to the last five years while he experienced great personal sacrifice.

It’s almost as if progressives, who should be at least supportive of the idea of research, have forgotten what Kennedy has tried to accomplish in his career as a public servant. Let me remind you: in 1984 Kennedy helped create one of the most important environmental organizations, not just America, but in the world, called the River keepers: he set out to Sue polluters that were destroying our waterways and polluting our drinking water. Believe it or not, he was criticized for that.

In 1999, Kennedy went toe to toe with Mayor Rudy Giuliani in New York City because the city’s drinking water ran the risk of being polluted because of violations of a regulated watershed agreement. The media actually criticized him for that.

In 2001, Kennedy was thrown in prison for trying to stop the US Navy from bombarding the island of Puerto Rico with radioactive shells. He went there to protest and spent 30 days in jail. Corporate media attacked him for that in favor of the US government’s position even though they were well aware the cancer clusters on that island were tragically high.

In 2013, Bobby was arrested for blocking a thoroughfare in front of the White House during a protest because he believed that the Keystone XL pipeline was a bad idea, and that it would cause pollution of one of the largest drinking water aquifers in the world. Corporate media attacked him for that.

Beginning as early as 2001, Bobby has been on the front line day-to-day and almost hand-to-hand combat with major petroleum producers and energy producers in his war to stop climate change. For years, almost no month has gone by without Bobby traveling coast-to-coast to deliver the message about how climate change will leave our children with a planet that is almost uninhabitable.

Just two months ago you might remember Bobby on the front lines of the Dakota Access pipeline protest being threatened with arrest and far worse.

So don’t you dare write or email this news site complaining that you’re angry that Bobby was undertaking a simple process of trying to find a better way to protect generations of children who may be at risk unless we can find, not a better vaccine, but a better delivery system for that vaccine that does not include Mercury.

Don’t dare tell me or anybody on this staff that he has been anything but a true soldier where comes to improving your world and mine.