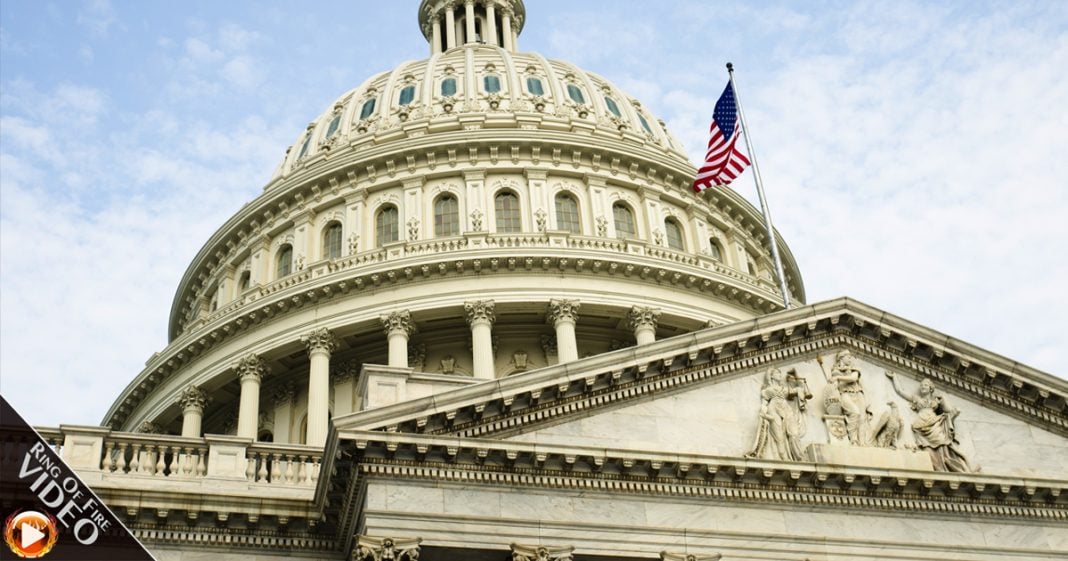 Ring of Fire’s Sam Seder is joined by Heather ‘Digby’ Parton to talk about the Republicans first move of 2017; to disempower the Office of Congressional Ethics.

Sam: The republican, or the new congress, was sworn in this week and on the eve of the swearing in republican house members were already … I mean, just the tremendous hunger to attack the quality of our government and our institutions is rather impressive. This is like a kid’s eating cookies on the way to the dessert buffet, I guess. They gather in Washington the night before the new congress is sworn in, and this is where they come up with the rules package that they’re going to pass on day one. Which is going to dictate a series of rules and administrative functions of the new congress and the republican caucus votes in favor … I don’t have the specific numbers in front of me. It was something like about 147 to 50 to, not quite abolish, but certainly disempower the office of congressional ethics. Which was basically like the investigative force that would submit potential charges, or exonerate congressmen of charges, to the congressional ethics committee. Then, I guess, all heck broke loose.

Digby: Well all heck broke loose because the media actually reported that this was happening and apparently congressional offices were inundated, republican and democratic, with complaints from the public. Keep in mind, this is the first thing that they did. They didn’t even name a post office or anything, they just came right in and said the first thing we’re going to do is get rid of this ethics office. This was after a campaign which was run against Hillary Clinton and her nickname was “Crooked Hillary”. The entire campaign was based around the idea that she was some kind of horrifyingly corrupt individual and, of course, Donald Trump ran with the slogan “drain the swamp”. He was going to be this guy who was going to come in and change. Evidently what happened, a lot of the Trump voters, people who for some God unknown reason actually thought he knew what he was talking about or meant it when he said he was going to end corruption in Washington. They got upset with their congress people and they called them up. There was a reversal there, now Trump himself tweeted out and he admonished them for their timing.

Digby: That you should have waited, maybe you could’ve hidden this a little better.

Sam: This had to be the first thing that you guys did? That’s basically it.

Digby: Yeah, exactly, you probably should’ve waited just a little bit. There are other things you could’ve done first. Of course many in the media rushed to give him credit for being some kind of reformer or something. Of course, let’s put this in context, there has never been anyone as corrupt as Donald Trump, ever even been in a presidential transition, much less about to enter the White House. It’s unprecedented and I’m sure we’ll talk about that.

Digby: Him saying anything about that is kind of a joke, but they ended up reversing that decision and rather abruptly the next day … Which was kind of interesting to me, I don’t know about you, but they’re so over eager. They’re like a bunch of, I was going to say puppies, but I think it’s more like baby piranhas. Who are kind of just beside themselves and basically starting to chew on each other right?

Digby: I mean, they’re so excited that they couldn’t control themselves enough to think, ‘Maybe we ought to put this one in maybe two three months down the road.’

Sam: I know, I mean, first off we should say that Paul Ryan and Kevin McCarthy also thought this was a bad idea to do at this point. These are the leaders of the republicans in the house, they didn’t want this to go through at that time.

Digby: They’re not that stupid.

Sam: Well that’s the thing, is that this is really a rookie mistake and I found it interesting … There’s a couple of things I think that I found interesting about this whole thing. One, the idea that they would actually take this vote now suggests to me that Ryan can’t even talk to them about tactics, right? He couldn’t even sell them on the idea like, ‘Hey this is something you want to do in a couple of months. This is not something you want to do right now, trust me on this.’ They don’t even have that kind of faith in him. Now he won his speaker ship with all but one vote, so no specific danger there, but you don’t get the sense that they really trust him. If you don’t trust your speaker of the house and the leader of your party, Kevin McCarthy, just about the timing of something that seems to be fairly non-urgent and so politically radioactive, I don’t know what that says about your relationship with the leadership of the party. The other things that’s-

Digby: Well I think it says that it hasn’t changed. Ryan, I think people forget just how unpopular he was. He got booed just the other day when Trump appeared at one of his victory rallies up in Wisconsin. Ryan was there and he got booed and Trump had to say, ‘Oh no, no, no it’s okay. I found out that he’s an okay guy as long as he stays in line. Ha, ha, ha.’ It was this sort of weird-

Digby: -backhanded compliment that he gave him. Ryan is not popular on the base, if you go and look at all the long time conservative movement websites and different groups, you see he’s still not popular with the base. I don’t think that the people who sort of are responsive to that group care about Paul Ryan. I just don’t think they care. I think they figure that they can do whatever they want and weirdly enough, they’ve probably been empowered by Trump because many of those same people were Trump voters. These are the baby piranhas. They’re, as you say, the rookies. Many of whom, I’m talking about the voters here, who are … According to some of the stuff that I’ve been reading over the holiday break, the Trump voters are absolutely vicious when it comes to these republicans. There was a whole article in Politico about how much pressure these … Somebody like Mark Sanford, he said one thing about Trump. He said like, ‘Maybe we might not …’ I can’t remember what the specific issue was, but it was something very mild. Mark Stanford’s a wingnut right? He’s not like, he’s from South Carolina, he’s not like somebody from old fashion moderate or anything.

He said something mildly critical of Trump and was inundated with Trump voters threatening him, threatening his family. These people are really wound up and I think that that whole thing is hanging over everyone. The dynamic remains right? This was, remember, before Trump came along there was the freedom caucus and that whole group who were at odds with Paul Ryan. Now, I think, you’ve got that overlaid with the Trump voters, many of whom are the same people, and what is happening in that republican caucus … This is some cause for hope for us, really, because they have saved us in the past by being completely nuts and refusing to take yes for an answer, and do anything that might make sense. It’s beyond over reach, it’s also refusing to see how a good compromise can work for them. Ryan has had terrible problems trying to keep those people under control and I think there’s some dispersed little foray into governance. The fact that they rushed in and decided to try and lift the ethics laws first, or the ethics processes first, tells you that Ryan doesn’t have control as you say. And that this dynamic is going to continue even with a republican president, which is kind of interesting because it may be all we have.

The democrats seem to be completely impotent, so what are we going to do but sit back and watch I guess.