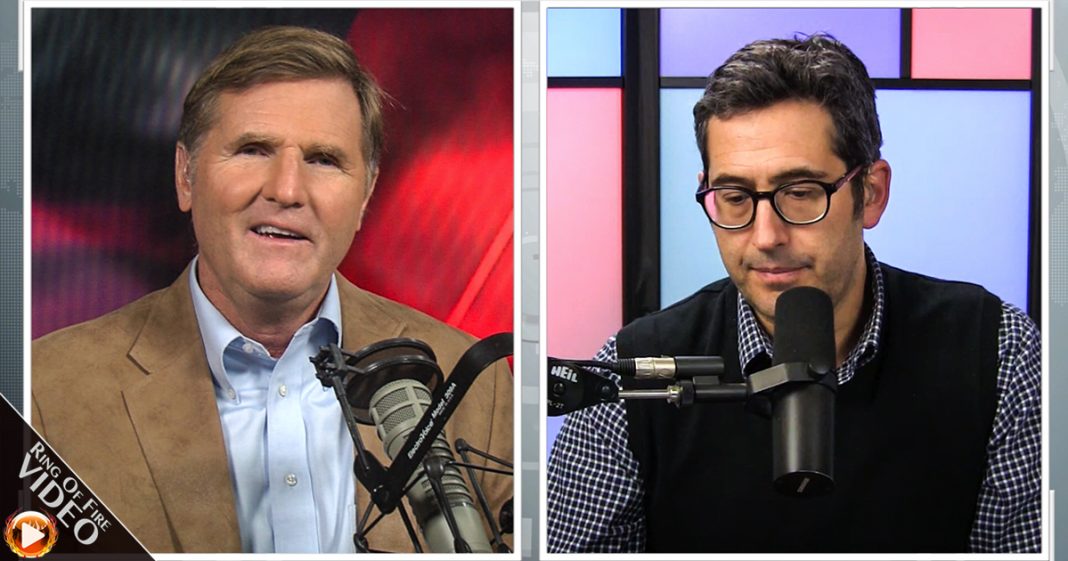 Sam: Pap, obviously a crazy week. We can talk about various things, but let’s start off with some local craziness to a certain extent. One of our co-hosts, Bobby Kennedy, was in the news this week.

Pap: Well, yeah, you know Bobby’s been in the news a lot over the years. Let me start that off this way. We were inundated with emails and tweets and phone calls, my God, from progressives and people that were driven, I’m sure, by the pharmaceutical companies. Here’s my take, Sam. If I may, let me just give you my take.

In the last election, there’s a split between progressives who supported Bernie Sanders and Democrats who supported Clinton. It reached a point that neither camp was ever taking the time to honestly evaluate the good ideas or the bad ideas with any degree of fairness. There was no logic to it.

In this controversy, I saw the same type of stilted, kind of narrow thinking play itself out in regard to Bobby Kennedy, who is a long-time friend of mine. I mean, 25 years. He used to be a law partner. He’s been with me in radio for 17 years. I saw him appointed to a governmental committee that had a goal of figuring out how to improve the delivery system for childhood vaccines.

Here’s the point. The first thing you start seeing is Bobby’s an anti-vaxxer. Well, he’s not. All you’ve got to do is go to his site and see he’s not an anti-vaxxer. His whole point had to do with the delivery system. The drug industry immediately – Sam, we’ve seen this before – but they immediately began calling Bobby this anti-vaxxer. They have their drug industry trolls that they pay a lot of money to. I see it on virtually every case I handle where they attack me and they attack the law firm for handling a case on a product that kills people. They knew that he wasn’t an anti-vaxxer when they said it. They counted on the fact that people have, Sam, they become unwilling to honestly assess what’s happening in political settings that involve any level of controversy.

The truth is Bobby is not an anti-vaxxer. He said so so many times on his website. He’s pro-vaccine. He’s vaccinated all his children. He simply has a belief that the delivery system for the vaccine can be causing harm to our children. For years, you’ve watched this. I’ve watched it. You’re as good a friend to him as I am. Incredible pushback. Incredible attacks on his person, personal attacks on him, both from the CDC and the drug industry, then these buffoons who never take the time to really listen to what the facts are.

Bobby’s taken it upon himself to better understand how a vaccine can be delivered in a way that doesn’t include thimerosal mercury. Okay, God forbid he should ask questions about whether or not high levels of mercury can cause an injury to our children. That’s all he’s doing here, Sam. That’s all he’s doing. It’s the delivery system, not having anything to do with vaccine. We all believe in vaccine, but you can improve the delivery system. That’s all he’s talking about. Of course, the idiotic media that thinks everything in terms of third-grade, 30-second soundbite, they go, ‘Well, he’s a Trump guy. He’s an anti-vaccine guy.’

Sam: Let’s back up for one second and just lay out there are two separate issues here. One is Bobby’s supposed stance in terms of vaccines. The other is his going and ostensibly meeting with Donald Trump and being appointed to the head of a would-be commission. We should say right up Bobby went to visit Donald Trump this week. Came down and told the press that he had been appointed to head of this commission. Subsequent to that, the Trump’s spokespeople said, ‘Well, there really is not a commission yet, but there might be,’ et cetera, et cetera.

Let’s take these two issues. We should say Bobby will be here next week, so I don’t want to do too much without him on this. This is a conversation we’ll have with him and we’ll have a better sense of what’s going on there, but Bobby’s position on vaccines – and I have talked to him about this, we’ve talked about it on the program – he has a tremendous amount of skepticism around the thimerosal.

From my perspective, I think we’ve sat down and talked about this. I don’t know. I think on this show, in fact. There are many times that you and I disagree and then Bobby and I disagree. We are at least told that thimerosal is no longer included in vaccinations. It’s supposedly in just some of the flu vaccinations.

Now, aside from the issues, because I don’t know the specifics of the thimerosal and the methylmercury versus ethylmercury, but my understanding is thimerosal is not included in the vast majority of vaccinations. I think Bobby is skeptical about that. From my perspective, it just seems to me there would be a lot of occasion to test that thesis.

Certainly, back in 2004, 2003, there was questions about the thimerosal that made sense. Once it was taken out, we did not see any implications for autism rates or anything else involving the dangers that one might associate with thimerosal. This is a place where Bobby and I disagree, but he’s done more research about it.

Pap: I don’t know that you do disagree. Yeah, I don’t think you’re that far off on your position. Look, Sam, honest to God, if I reduced this to the simplest argument it is: A) he believes in vaccines; B) he just says, ‘Let’s come up with a better system to deliver it.’ That’s it.

Sam: I will say this. There is a tremendous lack of transparency in this whole system. Part of the reason for that is because of the notion of herd immunity. That there is a public policy decision that is made that unless everyone buys into the notion of immunizations-

Pap: Then we spread disease.

Sam: Then we spread disease.

Pap: Yeah, there’s no question that that is a solid way to think about who we are. If we don’t, we’re at risk. Look, Sam, here’s the problem. It’s almost as if progressives have bought into everything. Progressives are generally very clear thinkers. They want to analyze. They want to understand. Not like the other side. It’s almost as if they’ve bought into this idea that Bobby, for some reason, is just out there in la la land for no good reason. Let me remind you of a couple things. 1984, I think it was, Kennedy helped create one of the most important environmental organizations in America.

Pap: The Riverkeepers. Set out to sue polluters who were destroying our waterways and polluting our drinking water. Believe it or not, he was hugely criticized for that. Where did the criticism come from? Corporate media. Came from their advertisers that they count on.

1999, Sam. Kennedy went toe-to-toe with Mayor Giuliani in New York, I think it was, because the city’s drinking water ran the risk of being polluted because of violations of a watershed agreement, I think it was. The media actually criticized him for that. Corporate media came out against him for that. They made him look like a nut case for that. 2001. Kennedy was thrown in prison, Sam. Do you realize-

Pap: I almost went on the same trip to Vieques. Fortunately, I had a trial. I didn’t make it. In 2001, Kennedy was thrown into prison for trying to stop the U.S. Navy from bombarding this darned island in Puerto Rico with radioactive shells. He went there to protest and he spent 30 days in jail because of it. Corporate media attacked him in favor of the U.S. government’s position even though corporate media knew, they were well aware of the fact, that cancer clusters on that island were tragically, insanely high. It doesn’t stop there, Sam. If I can just take a minute and finish.

Sam: We should add his child was born while he was in jail.

Pap: Yeah. His child was born while he’s in prison. These people that say, ‘Well, God, he’s just a nut.’ No, he cares about issues. In 2013, Bobby was arrested for blocking this thoroughfare in front of the White House. I remember this because we were doing a show on it during a protest because he believed that the Keystone XL Pipeline was a really bad idea. That it would cause pollution in one of the largest drinking water aquifers in the world. Corporate media, again, attacked him for that as being some type of left-wing troublemaker. Okay, why did they do that? Because corporate media is driven by corporations.

Coast-to-coast, though, he’s traveling around trying to make something happen for our children, so he can give our children a planet that we can inhabit. Two months ago, Dakota Access Pipeline. I could go on forever about the good that he’s done. Damn it, we just have to stop this not-thinking process and knee-jerk reaction like we’re seeing on this particular story.

Sam: Yeah. I mean, there’s obviously a lot of knee-jerk response based upon his name, which they know is going to get headlines. We’ve got to take a quick break,
Pap. We’ll talk more about this and other things when we return.