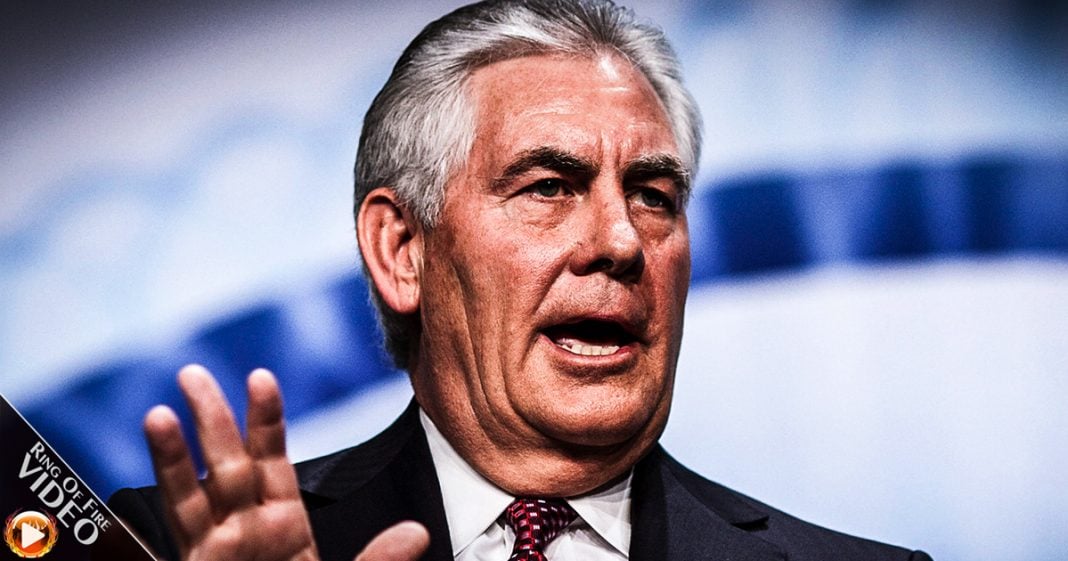 Rex Tillerson, the former CEO of Exxon Mobil and current Trump pick for Secretary of State, is currently in the crosshairs of two separate lawsuits dealing with Exxon’s climate change cover up. Not to mention his potential criminal activity in selling products to Iran, Sudan, and Syria in spite of US sanctions against those countries. Ring of Fire’s Farron Cousins discusses this.

One of the facts about Donald Trump secretary of state nominee Rex Tillerson, former CEO of Exxon, one of the facts that people do not seem to be willing to talk about this man is that the company he ran is currently under investigation for funding climate change denial throughout the United States and the globe since at least the 1970s. Some internal documents from the company indicate that they knew about the dangers of greenhouse gases and burning of fossil fuels as early as 1948. Nonetheless, there is a massive investigation going on into Exxon’s activities right now by state attorney general. Rex Tillerson is part of this investigation because, as it turns out, during his time as CEO of Exxon, the company continued to pay millions of dollars to organizations and think tanks whose purpose was to deny the existence of any climate change science, to refute climate change science and to pay people to go on television to refute the science of climate change. Rex Tillerson did that, approved that as the CEO of ExxonMobil.

Furthermore, that’s not the only investigation/lawsuit going on into Exxon right now. As it turns out, a group of children ranging in ages from nine to 19 are currently suing the federal government and several think tanks, and energy companies including ExxonMobil about their decision to do absolutely nothing on climate change. The lawsuit from these children says that doing nothing on climate change has denied them their constitutional rights to life, liberty and the pursuit of happiness. Rex Tillerson is part of that lawsuit and will actually have to go and talk to the court as part of this ongoing lawsuit.

Here we have a guy who Donald Trump thinks would be a great pick to be secretary of state who is currently involved in two different lawsuits about his company’s actions in denying climate change and polluting public discourse on the issue. That’s not the kind of guy you want out there as a representative of the United States traveling around the globe, but that’s what we get with Donald Trump. Rex Tillerson has absolutely no credentials in his resume that would indicate that he should even be available to be considered to be the secretary of state. Donald Trump didn’t even hesitate. There’s a couple of Republicans out there who weren’t complete assholes that he absolutely could have picked. Maybe it would have helped his negative ratings go up just a hair but he didn’t. He went with a billionaire corporatist oil tycoon who doesn’t give a damn about the environment and his entire work history proves it.

We have past the turning point as human beings on this planet to negate the effects of climate change. At this point, we’re talking about mitigation, dealing with the effects, not preventing them anymore, but dealing with them. Where are we going to relocate these people? The city of Miami within 50 years could be completely under water. There’s water washing up into the streets on a daily basis now because that’s just what happens during high tide now. It’s because the oceans are warming, and water is expanding and the ice caps are melting. We’ve got a crack in a ice sheet in the Antarctic that is growing by the day and could fracture this massive ice sheet allowing it to melt even further.

Do we care as a public? Obviously not because there’s not more discussion about this. Right now, everybody wants to talk about Rex Tillerson, and Exxon, and Russia. Well, in doing that, you’re ignoring the fact that this man is currently under two different investigations, and you’re also ignoring the fact that he broke US sanctions to sell $52 million worth of supplies to Iran. He did the same to Syria, to Sudan. This man is a borderline criminal. Hey, that’s good enough credential to fit right into the Trump administration.