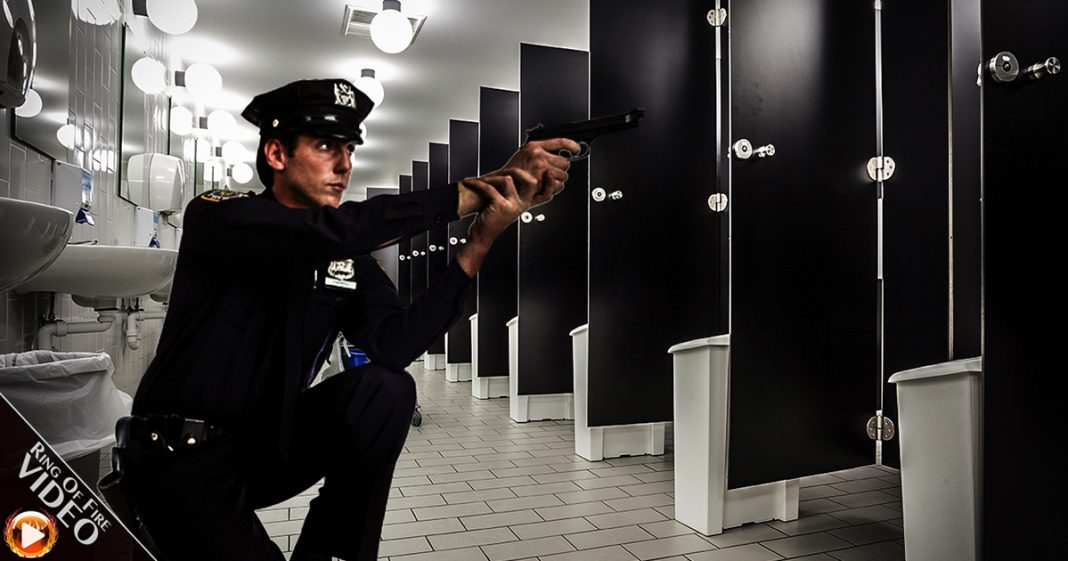 The state of Alabama is considering a law known as the Alabama Privacy Act that would require public restrooms to hire “officers” whose job it would be to make sure that your genitals coincide with the picture on the outside of that bathroom door. Ring of Fire’s Farron Cousins discusses this.

The State of Alabama, never known as really a beacon of tolerance in United States, is falling in line with seven other states to pass these bathroom vigilante laws. There’s a bill currently making its way through the Alabama Judiciary Committee, known as SB1, which will become known as the Alabama Privacy Act if it actually gets enacted. What it says is that any building, place, business, what have you, that has a large restroom, one for men, one for women, will be required to have a bathroom attendant. Essentially, a bathroom cop to monitor people’s genders. That is the intent of this law. Anyone caught violating this and going into a restroom that does not correspond to your gender will be fined anywhere between $2,000 and $3,500 for using the gender that you identify with for the restroom.

What is comical about this bill is that Funny or Die actually did a skit a while back where they had bathroom cops that were employed to check people’s genders. Now, Alabama has taken that satire and decided to use that as a grounds for crafting a law. Really, when you think about it, the real perverts here are not people who want to use a restroom. It’s the people who are obsessed with other people’s genitals. The ones who think that we need to check and see what’s in somebody’s pants before they go to the bathroom. Those are the people that we need to be concerned about, not people who identify as women or people who identify as men. They’re not the threats to our health and safety. It’s the people so obsessed with your gender, with your genitalia, those are the ones that we need to be worried about. Like those perverts up there in the Alabama Judiciary Committee that are sitting there crafting laws about your reproductive organs.

Does anybody else not see this as a problem? Do we not see who the real sickos are? I mean, for God’s sakes, we’re talking about people just wanting to go to a bathroom. Now, seven states, with Alabama included, seven states passing laws that say men can only go to men, women can only go to women. I mean, we tried at one point in American history to regulate bathrooms, didn’t go so well, and yet here we are in the year 2017 and we’re headed right back to the 40’s and 50’s with these bathroom laws. It’s just people wanting to go to the bathroom. I mean, the real people that we need to worry about in the bathroom, as history shows us, are actually Republican elected officials, Republican televangelists. Those are the ones that go to restrooms looking for something other than relief for their bladder. That’s who we need to be worried about. We need to be worried about these perverts in states like Alabama and North Carolina, who are so obsessed with your genitals that they can’t even function to do their real jobs anymore.