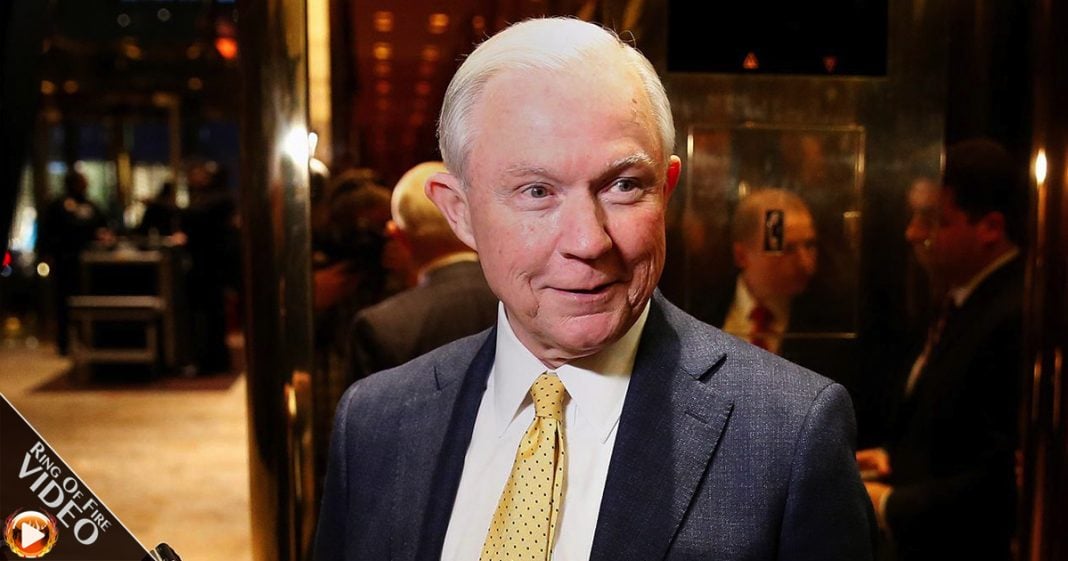 Heather ‘Digby’ Parton joins Ring of Fire’s Sam Seder to talk about the nomination for US Attorney General Jeff Sessions and his hostile background towards voting rights; mainly those of African Americans.

Sam: This past week, there were six people arrested, including the president of the NAACP. It was Tuesday of this week. They did a sit-in in Senator Jeff Sessions’ office. Senator Jeff Sessions has been nominated to be the Attorney General of the United States. You know, just even saying that, Digby, is sort of disturbing to me frankly.

I know he’s a senator, and the senators don’t like to vote against senators, but what are the chances that the Democrats are going to be able to put up a significant fight here?

Digby: It looks at though they’re going to try to put up a fight, which is very good news as far as I’m concerned. I wasn’t sure because generally, the rule has always been, if they’re a member of the club that they get more of a pass than somebody coming in from the outside. The Republicans haven’t … Look at what they did to Senator Tom Daschle, the former Majority Leader of the Democrats. They basically ran him out when President Obama nominated him for Health and Human Services. He had failed to pay taxes on a driver that someone had provided for him, and so-

Digby: I mean it was like, by comparison to what we’re seeing today in terms of conflicts of interest, it’s a joke. In any case, they have broken that precedent. It’s not as if it doesn’t happen. It happened to John Tower back in the beginning, in the 1980s, they had not confirmed him for Department of Defense because he was a drinker.

Sam: I got the sense that there was real concern that this guy was not capable.

Sam: Yeah. I mean so it wasn’t an ideological one.

Sam: It was just like this guy is having, is dealing with some-

Sam: … real, real issues, and this is the Pentagon. But-

Digby: Yeah. I think that is what happened with him, so it’s not unprecedented, but it is unusual. Normally, at the very least, it gives them a leg up. It does look to me, from what I’m seeing at least from emails that I get from various groups around the country, they’re gearing up for a real fight on Sessions. For obvious reasons. It’s the voting rights issue. Sessions is probably the most unreconstructed, old-fashioned, Southern racist that we have left in the Senate. He’s the guy. Strom Thurmond’s gone. We don’t have Jessie Helms. Sessions is the last of that breed. He has been very, very vocal against voting rights. He’s big proponent of the voter fraud myth. It’s not just that. It’s immigration too. In fact, that’s where he and Trump really had their meeting of the minds.

Digby: He was one of Trump’s main advisors on the immigration issue. He’s not just for shutting down immigration at the border. Building a wall or whatever mechanism they can find. Beefing up gigantic standing army at the border. He’s also for banning Muslims. He’s also for doing a full-halt on all immigration. He’s a real radical on this issue. I mean no more immigration at all. He believes that we need … Well, he calls it a pause, maybe a few decades of no more immigration, just to clean up the, purify the herd, I guess, is his concept here. This guy’s a real radical on these issues. They’re all sort of race-based, ugly, throw-back issues, which he has in common, by the way, with our new President. Let’s not kid ourselves about why he is such a favorite of Donald Trump.

He was one of the earliest to come out for Trump. He appeared at Trump’s first big rally. Remember down there in Mobile, Alabama. He put on one those hats. When that whole thing was first getting started, and they were screaming “White Power,” in the audience. This was picked up on various video streams of that particular rally. That was back, I think, in July or August of 2015, so he’s been with him from the very beginning. If the Democrats have any gumption, they’re going to do it.

He’s giving them some material, and it’s very weird that he’s doing it. Tell me what you think here. He’s withholding copies of speeches and statements that he’s made over the past 30 years. This is a common thing that you ask for. He’s been in public life this whole time, so it’s not like they’re asking him for something private. These are public statements. He’s refusing to provide it to various groups, People for the American Way and the Democrats on the House Judiciary Committee, which are doing the vetting.

I find that very strange. I don’t know whether or not this is just some stubbornness on his part or if he really has something to hide or he thinks that nobody can find these things. Whatever it is, it’s starting to churn up suspicion, which I find odd, that he would do that. I mean I don’t know. Maybe they’re planning some, maybe this is more devious than I thought. I think maybe there’s something to that that it’s theoretically possible that maybe Sessions could be stopped. If so, it would be a real blow because he is a Trump insider and a top, top, top advisor to Donald Trump.

Sam: Yeah, this is a guy, I mean 1,100 law school professors came out against this guy. He is, in particular, in an era where the Supreme Court has really gutted the Voting Rights Act, to get someone in here who seems to be … You look at the appointments to the Cabinet, the nominations, and almost to a person, Ben Carson, a little bit less so, it’s a little more cartoonish in some ways, but each person seems to be put there because they have a particular expertise, which will undermine the agency that they’re being put at.

When you guy get like Pruitt who’s the nominee for the EPA, this is a guy who’s an expert at litigating against the statutory requirements of the EPA. His job is going to be, literally, not just to keep the EPA from doing it’s job, but from protecting that lack of doing their job from states and individuals who are going to sue the EPA to do their statutory requirements. He is expert at knowing where the EPA can get away with not doing their job statutorily.

Jess Sessions, you could’ve brought somebody in there who was well-versed in making sure that the Department of Justice doesn’t go after mergers or something like this, but he’s brought in there specifically, it seems to me, to make sure that nothing goes on, who’s a prosecutor who’s been brought in there, who is expert at attacking those people who are trying to expand voting rights. That, to me, suggests that the Republicans do this certainly on a state-wide level. When they get elected, they want to put an apparatus in that’s going to help them get elected again. They do this time and time. I think Jeff Sessions is one of those guys.