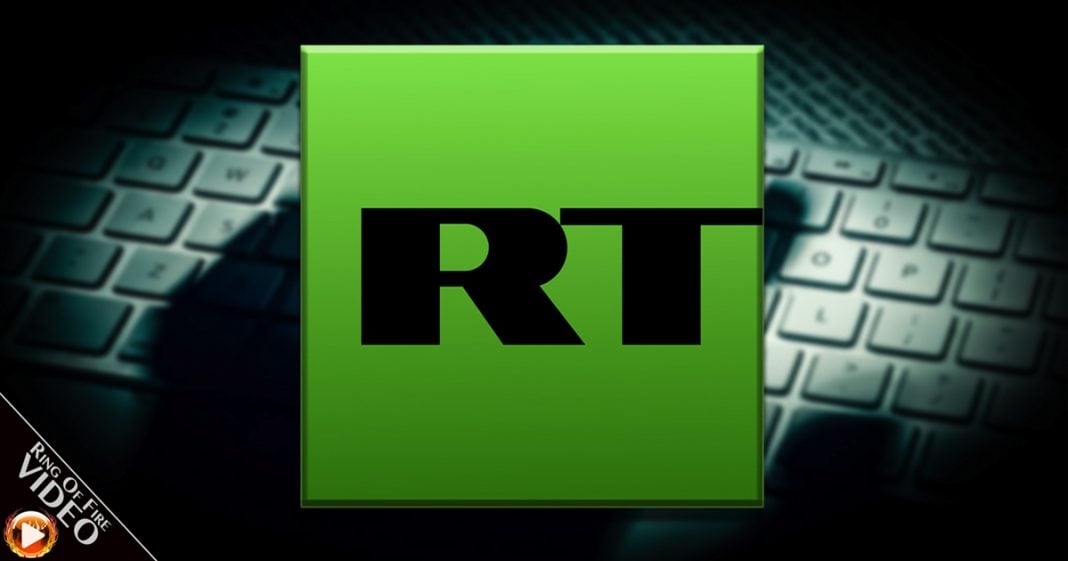 The Intelligence Report that was submitted to both President Obama and Donald Trump last week found its way online rather quickly, but the report itself talks very little about the DNC hacking incident. Instead, the report tries to attack the RT network by claiming that their coverage of issues like fracking, the environment, and Occupy Wall Street are dangerous for American democracy. Ring of Fire’s Farron Cousins discusses this.

On Friday of last week, the government’s intelligence report on Russian hacking into the 2016 election was released, given to President Obama and President-elect Donald Trump, and shortly thereafter was leaked to the internet for the entire world to see. Like anybody curious as to what the government had to say, I actually read that 50-page report, and I’ve got to say, they make a very compelling case for progressives and Democrats to watch the RT network. That is the only conclusion that I am able to draw from this leaked report.

It mentioned hacking a couple times. Did not specifically say whether or not there was any direct tie between officials in the Kremlin, or the hackers, or Wikileaks. There was no concrete connection made, and that is what the entire report was supposed to be about. That was the information that they were supposed to deliver to us. Instead, 90% of this entire document was aimed at the RT network, both RT International and RT America.

I know very little about RT International, just because I’m not able to watch their programming here. I know quite a bit about RT America. I’ve appeared on the network. Mike Papantonio hosts a show on the network that I work on. Yeah, I’ve got a lot of friends that work at RT, and I can tell you based on the experiences that I’ve had at RT, the people that I know who host shows on RT, and the people who work at RT, this was essentially an RT press release.

The overall theme of the report was to suggest that RT International, RT America, exist to weaken the United States’s image, to show the world that America is not all that great. I have news for you. It’s not. When you look at these issues that the network covers, and when you look at what’s going on in the United States, there are some serious problems.

An even bigger problem with the report is that they didn’t bother to say that anything that RT America had reported was not true. Those environmental issues that they cover, those are real. The anti-fracking stories that they do talking about the dangers of fracking, those are real. Same thing with the economic greed that has taken place in the United States.

Essentially, if they’re going to attack RT for doing this, then they have to go after every progressive outlet, Raw Story, AlterNet, Truthout, Huffington Post, MSNBC to a tiny extent. That’s what they need to be looking at. If those are their problems, then you’ve got to take everybody down.

Another point: If they’re saying that RT network existed or helped elevate Donald Trump, you also have to look at the fact that MSNBC had two of their hosts who attended Donald Trump’s New Year’s Eve party. How is that not elevating Donald Trump?

This whole report was absolute nothingness. It did nothing to bolster the government’s case about Russian hackers getting into the DNC and swaying the election. Furthermore, when you look at the fact that these DNC emails were released on July 22, 2016, do you know what happened one week later after those emails were released? Hillary Clinton, her polls number hit the third-highest point that they hit for the entire year of 2016. Yeah, after those email hacks that allegedly were supposed to take Hillary down, her rating, her polls against Donald Trump, went up. Her favorability ratings went up.

Do you know when they dropped again? When James Comey with the FBI issued his little letter saying they were going to re-look at this investigation. That’s when they dropped. That is what cost her the election. Even still on Election Day, Hillary was ahead in the polls by five points … five points on Election Day. You cannot say that these DNC emails were the reason she lost when after they were released her poll numbers starting climbing. The numbers don’t support this claim.

Now, I’m not trying to downplay anything that happened with this hack, or say even that certain people weren’t involved. We still don’t have the evidence, and that’s what we need to be able to come to a logical conclusion. I am not going to jump the gun here and blame an entire country for something that we don’t know if it happened through them or not. Give us the evidence and then let us make a decision. All these people who want to go out there right now and say that the Russian government did this are doing so without enough evidence. Those of us who think logically, who understand, and who actually read that entire report understand that the government does not have the evidence right now, and if they do, they’re sure as hell not showing us.