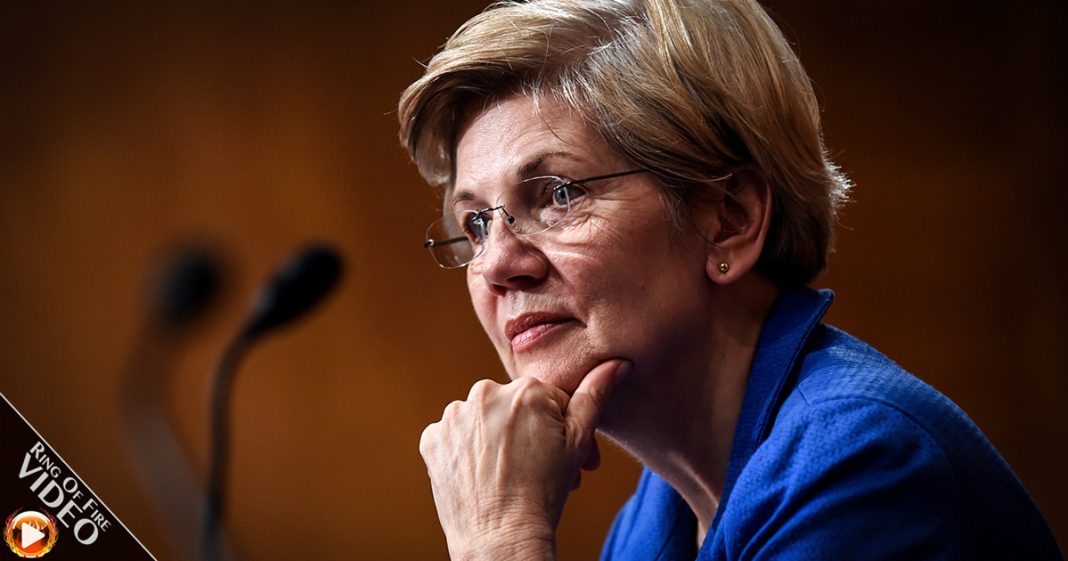 Democrats in Congress, led by Senator Elizabeth Warren, are trying to fight back against Donald Trump before he even takes office by introducing a Presidential Conflict of Interest Act that would prohibit a sitting president, his family, or anyone with direct contact with the president from operating a business that could benefit from the Office of the President.  This could spell an immediate disaster for Trump and ultimately pave the way for impeachment. Ring of Fire’s Farron Cousins discusses this.

Democrats in the senate led by Senator Elizabeth Warren have introduced the President Conflict of Interest Act. What this act is suppose to do is prevent any sitting president from holding interest in a corporation that could benefit from that person being the president of the United States. Very straight forward. Goes a little further than that. This person’s spouse, their children, anyone with direct contact with them on a daily basis, any relative, cannot hold a business that directly benefits from this Office of the President.

That is a very good piece of legislation. Will it pass? Absolutely not because Republicans, unfortunately, have the majority and they’re not going to do anything that’s going to screw with Donald Trump because that is exactly what this piece of legislation is designed to do. Now, yeah, this is obviously a direct attack on Donald Trump, but it kind of begs the question, “Why didn’t we ever have something like this in place to begin with?” Why are presidential conflicts of interest just now becoming a problem? This is legislation that really should have been passed back in the 1700s, when this country was first founded.

We should always look out for presidential conflicts of interest, but what the Democrats are trying to do right now is to show Donald Trump that they are not scared. That they are not going to back down. This is a completely new democratic approach compared to what we’ve seen from the last eight years under senate leadership under Harry Reid. Now we are starting to see the Democrats fight back. In the off chance that they actually get this piece of legislation to pass, then that means that the very second Donald Trump is sworn in, he is eligible for impeachment because he has still not divested from his own companies and his children, who will be a part of his cabinet, and at the very least even according to this legislation, they’re still his kids. They wouldn’t be able to run his business, but that is Donald Trump’s plan right now. Making him in direct violation of this law if it were to ever pass.

That is why Republicans won’t let it go forward. They’re not going to give this thing any floor time at all because they know that Donald Trump is not going to divest from his corporations. He is going to use his Office of the Presidency to make himself even richer at the expense of the American public. His kids are going to do the same thing. That’s what this is all about. That’s what the Office of the President has always been about for Donald Trump. “How can I make money off of this? How can I make money off of civil service to the United States at the expense of the United States?”

This piece of legislation, again, though it really doesn’t have a chance to pass, it shows that the Democrats, especially when being led by Elizabeth Warren like they are on this piece of legislation, they’re not going to sit quietly for the next four years and let Donald Trump get away with whatever the hell he wants to get away with. They’re going to fight back. Elizabeth Warren is leading that fight right now and that is why she and the rest of the Democratic party deserve our support when they do something correct. When they screw up, we hold them accountable. When they say, “We’re going to play along with Donald Trump. We’re going to confirm his people.” They don’t get that support. We will hold them accountable, but we will also praise them when they do something correct. That is what this piece of legislation is. Kudos to Elizabeth Warren for making this happen and for all the other Democrats who sign on to it, keep fighting. That’s all we can do for the next four years is keep fighting.