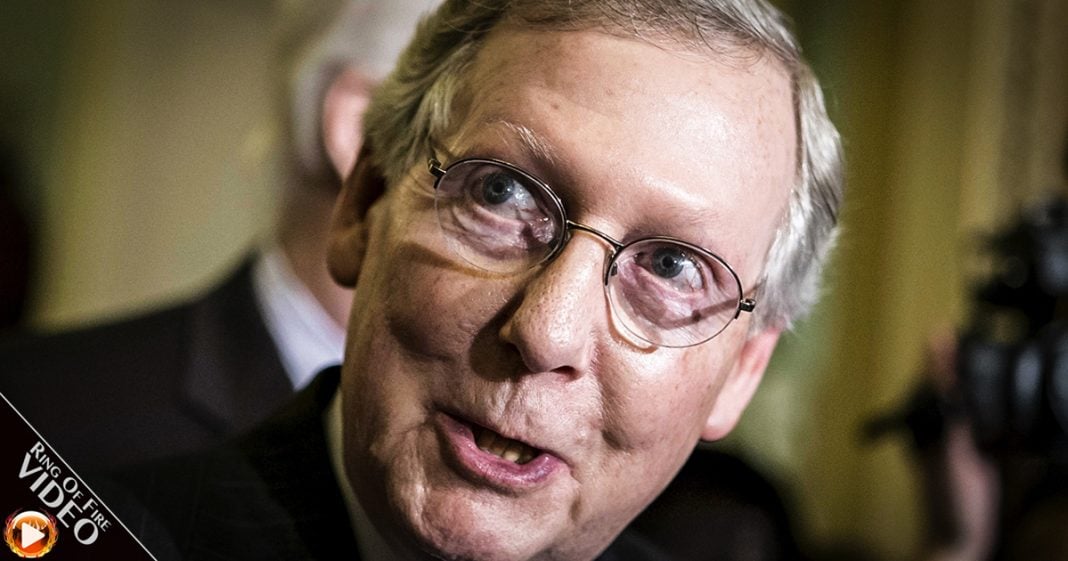 Mitch McConnell, the man who laid out countless hurdles for President Obama’s nominees to jump through in order to even get a confirmation hearing, told Democrats this past weekend to “grow up” and stop with all the obstruction talk about Trump’s cabinet picks (including those who haven’t even been vetted for conflicts of interest.) Ring of Fire’s Farron Cousins discusses this.

Republican Senate Majority Leader Mitch McConnell is mad as hell right now that the Democrats might not be willing to give all of Donald Trump’s cabinet position nominees a fair hearing. This past weekend on the Sunday morning talk shows, McConnell said the Democrats just need to grow up and just confirm these people.

So what’s the Democrats’ big objection to these people that Donald Trump has nominated for cabinet positions and other positions throughout the government? Their big gripe is the fact that these people still have not been vetted. We do not have financial disclosure forms. We do not have any of the necessary information to be able to digest it and make an informed decision about whether or not these people, one, are eligible to serve in these cabinet positions, and, two, will not use this position for their own personal profit, which appears to be the case at this point.

Furthermore, Mitch McConnell seems to forget that back in 2009 he did the exact same thing. In fact, this guy created the framework on how to do this. He laid out, before President Obama had even nominated anybody, an eight point survey, an eight point list of things that Obama’s nominees had to meet before they would even get a hearing. And now today, he’s telling us that those same standards that he put in place for Obama’s appointees do not apply to Donald Trump.

That is the height of Republican hypocrisy: “Do as I say, not as I do.” But there’s a big difference here. Mitch McConnell, according to himself, wanted to block Obama’s appointees because he was afraid of “wild Liberalism,” is what he called it. Meanwhile, Democrats are opposed to Donald Trump’s nominees because they’re just downright evil. These people want these positions, like Rex Tillerson, because they want to fatten their own wallets. They want to do everything that they can to enrich themselves, their businesses, their friends, other Republican donors. That’s all this is about. The Democrats’ obstruction here is only about protecting the country, protecting these offices from these people who do not care about the rule of law. They do not care about the wellbeing of American citizens. They care about money.

Same thing with Donald Trump. It’s amazing to think how far this country, the office of the President, has fallen since the days of John F. Kennedy. “Ask not what your country can do for you but what you can do for your country.” Now, today, we have a government that is completely controlled by people who are wondering what in the hell the government can do for them. “What can I get out of this for me? What’s in it for me? What am I going to gain from being the President of the United States? What am I going to gain from being the Secretary of State?” That is what Donald Trump is, that is what his appointments are, and that is why the Democrats are trying to stop these people from ever getting into office, or at the very least, making everything that these people have done throughout their lives public knowledge so that when it comes up for the next Presidential election, we can make informed decisions, not only based on what Donald Trump himself has done, but about the people that he has surrounded himself with that seek nothing more than to destroy this country for their own personal gain.