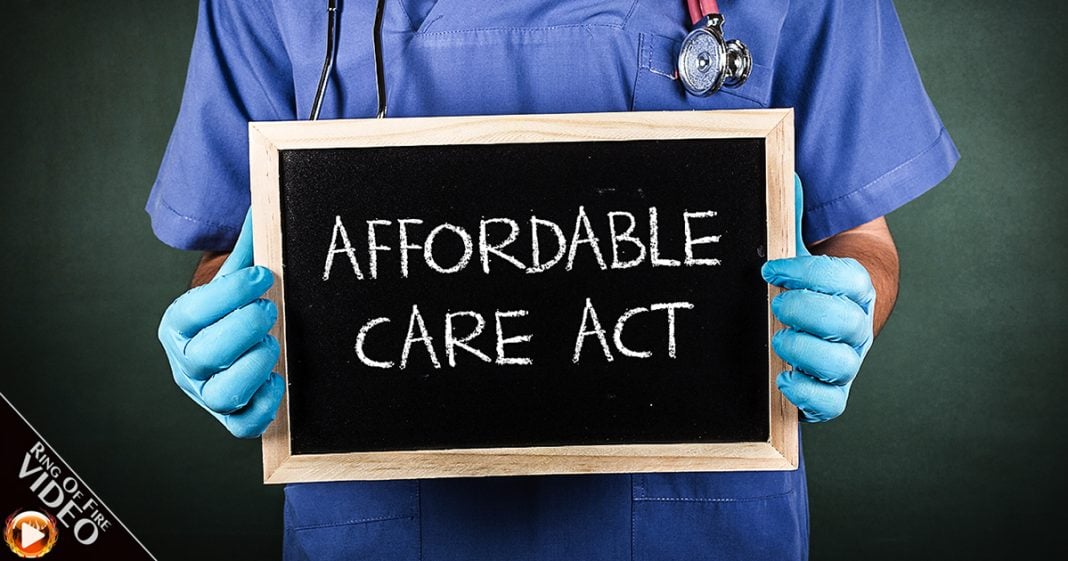 While Democrats are scrambling to find a plan to save The Affordable Care Act, Republicans are working on sneaky ways to repeal the law, piece by piece. Unfortunately for the GOP, they won’t be able to do away with the entire law, and this is going to lead to an even bigger healthcare disaster in the United States – one that the GOP is not prepared to handle. Ring of Fire’s Farron Cousins discusses this.

So far this week there’s been lot of discussion about Obamacare. The Democrats have met, and they’re trying to come up with ways to protect their signature achievement during the Obama years. Meanwhile, Republicans are meeting trying to figure out exactly how they’re going to repeal this entire law. Well, there are some things that Republicans can and cannot do in order to kill Obamacare. There’s a few things Democrats can do to save it.

Let’s start with the easiest. A full repeal of Obamacare. Is it possible? Yes. Is it probable? No. Because Democrats in the Senate, though they are the minority, they can absolutely filibusterer a full repeal. Therefore, a full repeal will not happen.

The Republicans are going a little bit sneakier route right now. They’re trying to tie-in anything in Obamacare related to budgetary issues, which include the tax subsidies for people who cannot afford health insurance, they’re tying those to budget bills through a process known as reconciliation where the budget bills cannot be filibustered. They’re simple up and down, yes or no, vote. Goes to the President, he signs it, those can be repealed. Typically, those pieces of legislation should not and cannot be included in a budget bill. It has to go through something known as the Byrd Law, B-Y-R-D, and then that has to be decided by a Senate Parliamentarian. If the parliamentarian actually says, “No. You can’t include those,” the Republicans then have the option to fire the Senate Parliamentarian, hire a new guy who’s going to give them approval, so then they’ll be able to do that.

Here’s the thing, the best part of the Affordable Care Act is the preexisting conditions stipulation that says you cannot be denied health insurance if you have a preexisting medical condition. Republicans can’t touch that because a Democratic filibuster will keep it in place. They can, however, make health insurance unaffordable for millions of people by repealing all of those tax subsidies, and in effect, those tax subsidies are paid for increased taxes on the wealthy which is going to give the wealthy a tax break of $346 billion over the next 10 years. That’s what this is all of about. This has nothing to do with health insurance or wanting a better plan. Republicans are simply trying to give the wealthy another tax break. That’s what the whole repeal of Obamacare is about. That’s why they’re only wanting to touch these subsidies issues and the tax issues, because that’s all they care about. What’s going to happen is that’s going to make people unable to afford this health insurance.

Here’s another side product of what could happen if they repeal the subsidies but leave in the preexisting condition requirement, healthy people will simply not buy insurance. They won’t need it. If they get sick, they then can buy health insurance. They can’t be denied. Then the insurance company has to pay. It’s going to result in higher premiums for everybody else. Huge financial losses for the insurance industry which is going to result in ever higher premiums. Bottom line is that there’s no way to do this guys.

We have a law in place. Is it perfect? God no. Why not just improve it? The answer is because Republicans don’t want to. Again, it’s for two reasons. One, they want to give the wealthy that massive tax break. Two, this was created by Democrats, so it needs to go away. It’s spite and loyalty to the 1%. That is 100% what is behind the Republicans push to repeal Obamacare. They do have a couple tools to do this with. Unfortunately, when 20 million people are no longer able to afford health insurance, the Republicans are going to have to own that. They’re going to have to answer for that in the midterm elections. That’s not going to end well for them. Even worse, it’s not going to end well for the 20 million Americans who find themselves without health insurance because the Republicans wanted to give a tax break to their wealthy donors.