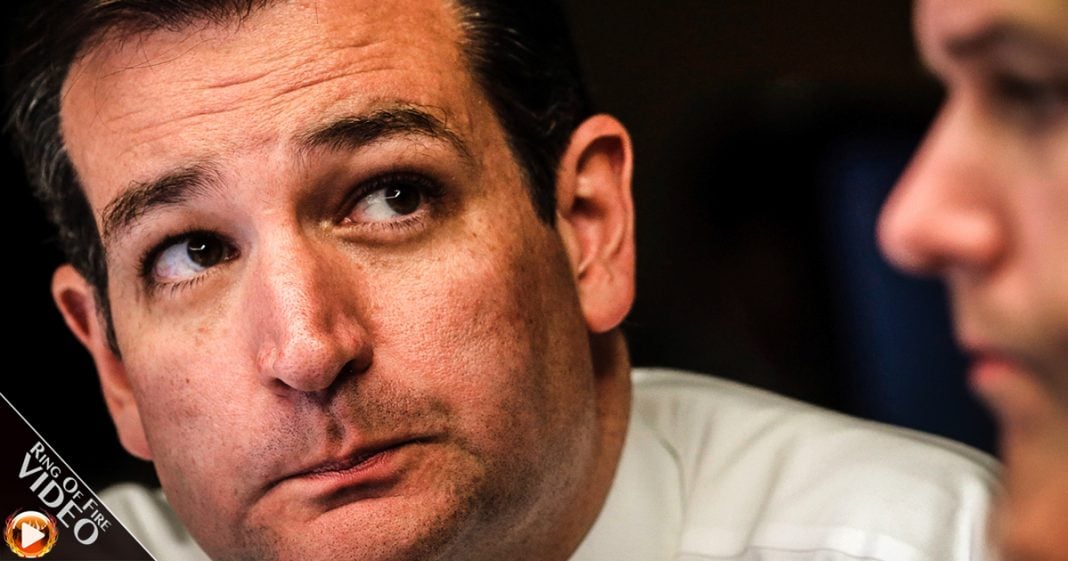 Senator Ted Cruz, along with Republican Representative Ron DeSantis, have introduced a Constitutional amendment that would limit the number of terms for members of Congress. This is actually a great move by the Republicans, as it will help to flush the long-standing incompetence out of Washington, D.C. and prevent a few members of Congress from becoming “kingmakers.” Ring of Fire’s Farron Cousins discusses this.

Something remarkable happened this week that, to be honest, I hope never happens again, but I have found myself agreeing with something that Ted Cruz has done. In fact, I agree 100% with what Ted Cruz is trying to accomplish in Washington DC. Some progressives are going to disagree with me, but I think it is absolutely the right thing to do for American democracy.

Ted Cruz along with Republican Representative Ron DeSantis have introduced an amendment that would put limits on congressional terms in office, both the House and the Senate. House members would be limited to three two-year terms. Senators would be limited to two six-year terms. Now, I have talked about this a lot over the last two years. The fact that we absolutely need congressional terms limits. That’s why I find myself agreeing with this disgusting little character from Texas.

Think about the fact that a guy like John McCain, who just won reelection again, has been sitting in that senate for over 20 years. Same thing with the Jim Inhofe, the top climate change denying Republican in the US Senate. John Boehner, although he’s not in the house anymore, he’s been gone for about a year, same story with him. This was a man, who in the late 90s, passed out checks directly from the tobacco industry to Republican members of Congress on Congressional Floor. These people have to go. The problem is that a lot of these people are in very safe districts. where no matter who challenges them, they’re going to win.

What happens when somebody who has that kind of name recognition, like a John McCain or an Inhofe, can’t run for office anymore? That does open up the floor. It opens it up to people who otherwise would not have had their voices heard. People who, unlike McCain and Inhofe, have spent the last 20 years in their home district seeing what’s going on, talking to people, actually understanding their own home. A lot of people both Democrat and Republican in Washington DC have lost touch with that. That’s why we see the amount of corruption and corporate influence that we see today in Washington DC.

Yeah, there is a downside to it. That downside means that we would say goodbye to good people, like Bernie Sanders, Sheldon Whitehouse. The very few good people that we do have in the Senate in the House of Representatives would eventually be kicked out due to hitting their term limits, but the benefits to this outweigh those costs. It’ll be a sad day when Bernie Sanders is not longer a sitting US Senator. Same thing with Elizabeth Warren, or a Sheldon Whitehouse, or Representative Keith Ellison, but we have to get the rest of them out. A few good people cannot fight against hundreds of corrupt members of Congress. That is what we’re looking at today.

That’s not to say that term limits are going to completely get rid of the corruption, but it’s going to limit it. It’s going to make these seats that’ve been too safe in Republican hands for too long competitive again. It’s going to give a Party the chance to win back the Senate in any given year. That’s something we don’t see, because usually it’s just mostly Democrats or mostly Republicans up for reelection. When you start getting term limits, we’re going to have more open seats with every single election. That’s what has to happen in the United States, because these people, McCain, Inhofe, and a lot of other ones who’ve been in there for 20/30 years, they have become kings. They do have absolute power. That is not acceptable for a functional democracy like the United States. Unfortunately, I have to say, “Good job Ted Cruz. You’ve actually, finally for once in your life, got something right.”