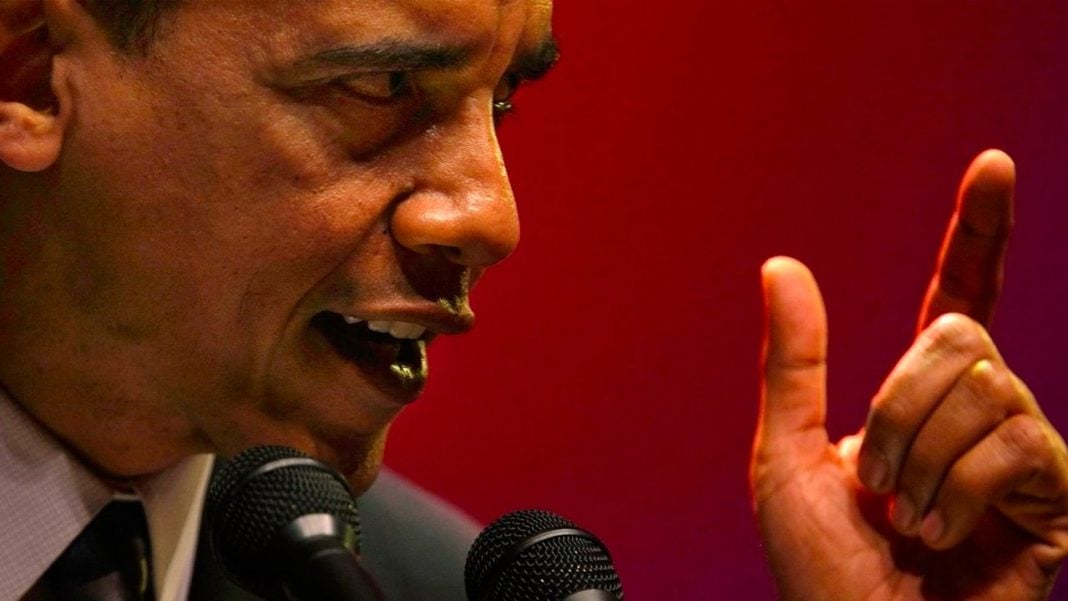 As part of the new National Defense Authorization Act, President Obama has signed a law that will allow the government to create an “anti-propaganda” department whose job is to “counter foreign propaganda” in the US. The law allows the administration to make grants to social media outlets and independent media who will be charged with “refuting” online propaganda. The Ring of Fire’s Farron Cousins discusses this.

On December 23rd, a Friday, the day before Christmas Eve and the entire Christmas holiday, when he absolutely knew that nobody in the world was going to be paying attention to anything that he did, President Obama signed the National Defense Authorization Act. That in and of itself is nothing special. It’s something that happens pretty much every single year. It is the budget that funds the United States military so you know it’s something Republicans are not going to just let go under the radar. Here’s the thing about the NDAA that President Obama signed the last Friday that nobody paid attention to. It specifically outlines in this legislation a program for the federal government to create that essentially makes it a new ministry of truth straight out of George Orwell’s 1984.

What I mean is section 1287, the Global Engagement Center, what this new organization does, and the government has 180 days to create it, which means Donald Trump’s going to be in charge of it, but what this organization is going to do is fight foreign propaganda in the United States. They do not outline what constitutes as foreign propaganda, and it doesn’t say that the propaganda has to be specifically aimed at interfering with the United States, in general. Just get rid of foreign propaganda. How are they going to do this? According to section 1287, they’re going to help give out grants to social and independent media outlets whose job it will be to refute the propaganda.

Essentially, the government is going to hand out cash to Facebook or Twitter or any independent media outlet that actively goes out there and fights this so-called propaganda. Again, there are no clear terms written in this legislation that President Obama signed that outlined what propaganda is. All of this, obviously, is a response to the alleged Russian hacking of the DNC that may have contributed to Hillary Clinton’s loss, although numbers show that that’s not really what affected it. Regardless, this is an overreaction to what happened this past summer with the DNC hacking, and it is completely targeting the wrong sources of news.

Anything that was leaked out of this DNC hack was not propaganda. It may have hurt Hillary Clinton. It may have helped Donald Trump, but it damn sure wasn’t propaganda releasing somebody’s own emails. Sorry, that’s not what propaganda is, so now we’ve got this, signed into law, these tools for the Defense Department to actively go after the media. What they’re wanting to do according to stories that have been popping up in Washington Post recently, they want to go after RT America, they want to go after any blog or outlet that has any ties to any non-US entity, which would be The Intercept. That’s the goal of this, the censoring of information, the kinds of things you see Kim Jong-un doing over there. That’s what the United States is going to do, and under Donald Trump, this is not going to be a tool used to fight foreign propaganda. It’s going to be a tool to shut down independent media. It’s going to be a tool to silence dissenting voices. That’s the goal of this.

These organizations that are going to be getting grants from the federal government are going to be getting grants for going out there and saying, “No, don’t listen to this. America’s great. Yay, A America, number one.” That’s not how the United States works, but it is now. We are driving full speed into a fascist country, and there doesn’t appear to be any stopping it because President Obama is helping it along by signing pieces of garbage like this into law. Go look it up for yourself. Section 1287, Global Engagement Center of the NDAA that President Obama signed on December 23rd.

You may not always like it, but that’s what the media is supposed to do. Positive or negative, we’ve got to talk about it, and as far as this story is concerned, this is a huge negative that completely could erase any good, positive gain that President Obama had during his presidency because, again, he is taking us directly into the book 1984, and it doesn’t appear that there is any way to back us out of this at this point.