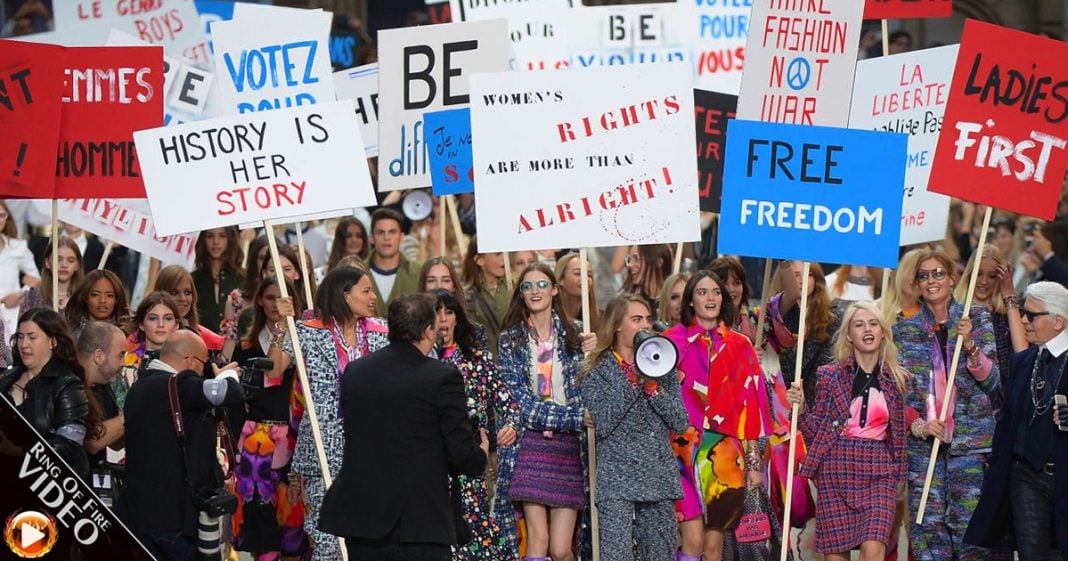 The Trump transition team has made another odd and terrifying request, as they are demanding the names of employees within the State Department who worked on gender equality programs. Is retaliation on the way? The Ring of Fire’s Farron Cousins discusses this.

Well, the Trump campaign is once again demanding information that they really have no business getting involved in. After we saw them a few weeks ago try to demand all of the names from the Energy Department on anybody who worked on climate change projects, now the Trump team is demanding answers from the State Department. They want to know the names of every single person who worked on any kind of gender equality project while at the State Department. They also want to know just what exactly the State Department is doing getting involved in gender equality. Specifically, they want to know about programs and activities to promote gender equality such as ending gender based violence, promoting women’s participation in economic and political spheres, entrepreneurship, and the like.

There is only one reason why Donald Trump’s team would want the names of these people, and why they would want to know exactly what programs the State Department is working on. That is because they want to get rid of them. Beyond that, there is no reason why they Trump team needs to know who is involved in this and what projects the department is funding. We have talked a lot about how disastrous Trump is going to be for the economy, how disastrous he’s going to be for immigration, how horrible he’s going to be on foreign affairs, but the one thing we haven’t hit on that much is how bad Donald Trump is going to be for women in the United States.

We know that the Republican Party as a whole some how, for some reason, absolutely hates women. They don’t think they’re smart enough to be able to figure out what to do with their own bodies. They don’t want to fund healthcare for underprivileged women. They don’t want to provide any kind of birth control or contraceptives for women, yet Viagra for men, hell, we’re making that in single packs now so you can take it with you on vacation. It’s sickening because people actually feel this way. Not that they’re trying to do it, I mean that’s bad enough, but the fact that the Republicans actually believe these things is disgusting.

For Trump’s team to come into Washington and try to say, “You tell me who is working on these gender equality things most likely because we want to get rid of them,” that is disgusting. It falls in line with the behavior that we have seen from Donald Trump since he first rose to public prominence. The man has no respect whatsoever for women.

He believes that women are objects meant to hang on the arm of a man, almost like Christmas tree ornament. To Donald Trump, that’s what women really are. That’s why the only praise he’s able to give his daughter are about her looks, because that’s the only thing Donald Trump cares about in women. He doesn’t care that you don’t make as much money as a man doing the same job even if you’re more qualified. All that matters is how you look. Are you pretty? Well then maybe he could do something for you. If not, as he said himself, he wouldn’t even sexually harass an ugly woman. Could you imagine such a thing? Again, this is the man that’s going to be the President of The United States in just a couple weeks, here.

The plight of women in the United States is not getting any better. It didn’t get any better under President Obama. I know they did try a few things, maybe it got slightly better. This overall attack on women from the Republican Party is going to intensify with Mike Pence and Donald Trump in the White House. These are two men that have no respect whatsoever for women. Their policies, the things that they’re going to push once they get sworn in, are only going to further prove that point. I wish I could say that there is hope. I wish I could say that there is a light at the end of this tunnel. The only light at then end of this tunnel is the year 2020 when we have another presidential election.

For the meantime, all we can do is fight, and stand up for everybody. If that issue doesn’t affect you, I don’t care. Stand up and fight, because if you don’t fight for them, they won’t fight for you when the issue finally does affect you. To be honest, economic equality, gender equality, does affect every one of us. We should all be involved because we’re all human beings. As we get even closer to Donald Trump’s Inauguration Day, everybody needs to be ready to fight for equality. As hard as that fight has been for the last eight years, it’s about to get so much more difficult in the coming four years.