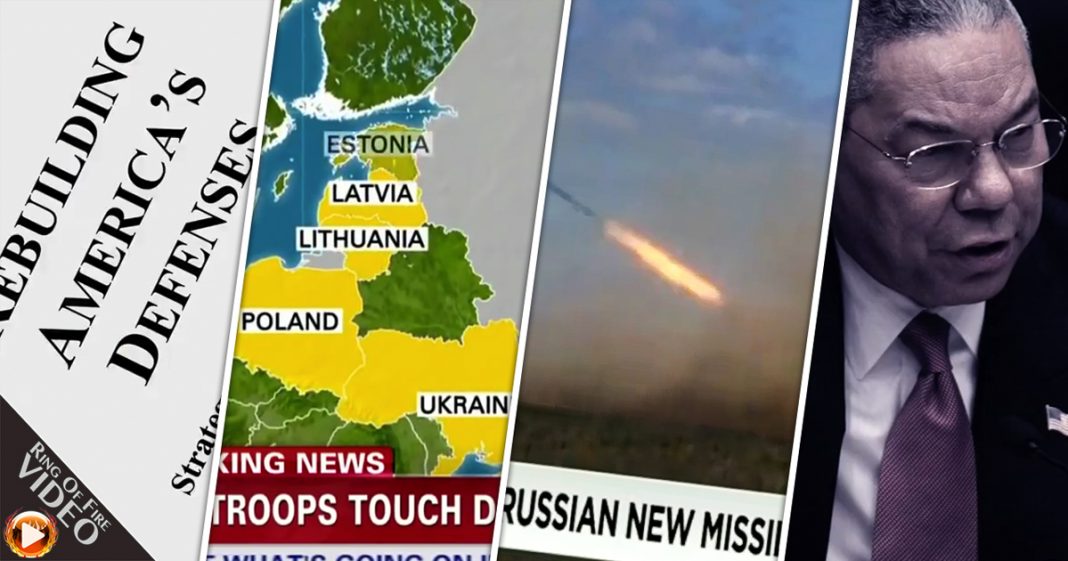 The foreign policy of the United States over the last 36 years has been a train wreck, and the same people responsible for bringing us unwinnable wars and constant conflict are trying to weasel their way back into power. So who are these people and what are they hoping to accomplish?

Farron: Robbie, your new film series, “A Very Heavy Agenda.” It tells the story of what’s happened with our hawkish foreign policy over these last 16 years or so, even a little before that. Give us a quick primer on the overall take of the film.

Robbie: It’s a three-part documentary series that pretty much chronologically goes over what kind of damage mostly the neoconservatives were doing, starting with the Bush administration, and then going all the way until the present. Most of the movie covers the eight years of Obama, and how the neocons crept in during his administration and influenced it in terms of the Ukraine policy, the Syrian policy, our intervention in Libya. Pretty much every military intervention that happened while Obama was in office was in some way either egged on or influenced by the neocons, some of them actually inside of his own administration.

Farron: One of the things that you discuss in the film is the Project for a New American Century, PNAC. That is a story that a lot of Americans either didn’t pay attention to during the Clinton administration and the Bush administration, or they simply didn’t hear about it. Tell us a little bit about PNAC and how they helped to influence basically our horrible foreign policy for the last couple of decades.

Robbie: When most people think of neoconservative foreign policy, the names the American Enterprise Institute, the Hudson Institute, some of these more traditional think tanks in D.C. take top billing, but Project for the New American Century in a lot of ways was actually the most influential neoconservative institution over the Bush administration. In fact, I think over 15 members of PNAC actually went directly into the Bush White House immediately when he got into office.

You can look at letters they were writing, essentially lobbying presidents ever since Bill Clinton, to get us into foreign interventions. They wrote a letter to Bill Clinton in 1998 asking him to overthrow Saddam Hussein. It was signed by people like Jeb Bush, Paul Wolfowitz, Francis Fukuyama, many others who ended up going directly into the Bush administration.

What they’ve been doing the whole time is essentially working as an outside, agitating force to get whatever administration is currently in power to engage in some new military conflict. I think probably the thing that would interest people the most about PNAC is, in 2000 they actually wrote a document called Rebuilding America’s Defenses, which lays out the post 9/11 Bush world. In that document, they say that to accomplish this buildup of our military in this short time frame that we’d like, it would require an event, something resembling a new Pearl Harbor, a catalyzing event like a new Pearl Harbor. Which of course a year later 9/11 happened and it allowed them to do all the things that they laid out in this document.

Farron: If you look today, go online and you try to find the Project for a New American Century, at least on the surface it appears that this group has disappeared or they disbanded. They no longer exist online. Are they still around? Are they still out there coordinating with each other, or have they really disbanded and gone their separate ways?

Robbie: No, they’re definitely still out there. I describe it to people like what Blackwater did. If you search for Blackwater now on the Internet, you won’t find their name anywhere because they’ve changed their name several times since all the controversies happened. It’s a similar thing to Project for the New American Century. Somewhere around the time of 2007, 2008 they decided to close down the Project for the New American Century and essentially reopen it under a new name.

The intentions behind this reopening was not only a rebranding to make people forget what kind of reputation the neocons had. They had such a bad reputation that it was in a very simple way a rebranding effort. I think more importantly, what they were trying to do, just like they tried to do during the Clinton administration, is neoconservatives realized that partisanship is actually unimportant. What’s more important is trying to reach across the aisle and influence Democrats, essentially during the Obama administration, to go along with sort of this Bush foreign policy, and that’s what they did.

I would describe the foreign policy initiative, which is their rebranded think tank, as PNAC 2.0. They did that as soon as Obama got into office, they egged him on for roughly the first four years of his presidency, and were cheering on many of Obama’s foreign policy actions that could arguably could be described as neocon.

Farron: You talk a lot about Kagan in the films. Lay out his story. Why should the voters be concerned about a guy like Kagan throwing support behind Hillary Clinton?

Robbie: I think the main reason is that he was the co-founder of the Project for the New American Century, which of course is this very influential neoconservative think tank, but why I think Kagan is particularly dangerous is because he’s really good at appealing to liberalism. When you see this new op-ed that he’s writing, which is essentially an anti-Trump screed saying that the GOP is making a huge mistake by letting someone like Trump take over. Whether you agree with him or not on that, I’m sure many liberals would agree with that, it’s very fascinating to watch the way he’s characterizing the situation. He calls right Republicans Islamophobes, bigots, and I would agree with him on that, but this is language that usually liberals and people on the left wing use.

I think it gives an interesting insight into what I was just talking about, that partisanship to the neoconservatives isn’t as important as getting their foreign policy message across. Hillary Clinton apparently is someone who is going to deliver that message, and is more in line with the neoconservative ideology than Obama even. They’ve actually said this. Other neoconservatives are saying now that they would have rather had Hillary Clinton as president in 2008 because she is so in line with the way that they think.

Farron: Is Kagan still in the picture? Does he still have influence over foreign policy today?

Robbie: I think inside the actual U.S. government, I’m not sure how much influence he still has today. I think very few people realize that his wife, Victoria Nuland, has an incredible amount of influence inside the Obama administration. Robert Kagan was actually appointed a position in the State Department by Hillary Clinton when she was appointed Secretary of State, so not only does he have an influential … Arguably, we don’t really know what his direct influence is, but his wife has pretty much been in charge of the Eastern European NATO policies for the last four years in the State Department. Arguably she has had a role to play in the Ukraine situation that erupted a couple of years back. I think that that’s what people should be looking at, is Victoria Nuland and Robert Kagan as this power couple that have inserted themselves into U.S. government policy making and foreign policy making.

Farron: You just mentioned Ukraine, and that’s another point I want to get to that you discuss in your films, is the media’s role in all of this. A couple years ago, Liz Wahl from RT America decided on air she was going to announce her resignation, saying she could not work for this Russian propaganda network. I was, I guess you could call lucky. Mike Papantonio was filling in for Tom Hartman. We were in the studio when that happened. There was just this sense of shock among everybody there and more of a, ‘What the hell are you talking about?’ than a, ‘Right on, do the right thing.’

Your sister, Abby Martin was a host on RT for a very long time. Liz wanted us to believe that there is this big Russian conspiracy. They’re trying to influence the media. I haven’t seen that. Have you?

Robbie: No. Russia Today has put out some stuff that is maybe a little bit Russian leaning. It’s understandable, it’s a Russian owned television channel. Tom’s program, Abby’s program were very much editorial content. It was all their own opinions, bringing to the table, bringing guests on. I think that criticism can only really be leveled at the news cycle content they do. Even still, compared to the Western media, it’s completely dwarfed by the slant and the obvious propaganda that the Western media is putting out, CNN, MSNBC even, of course Fox News. Yeah, it was completely ridiculous for Liz Wahl to say that she can no longer work for a Putin … What did she call it? “A network that whitewashes the actions of Vladimir Putin.” It’s straight out of a neocon script.

Then of course it was revealed later, and I don’t know if Max Blumenthal, Arania Khalek, Rania sorry, were the ones who actually discovered that. The Foreign Policy Initiative, which is Project for the New American Century 2.0, announced on Twitter, ‘Something big is about to happen on RT in about 20 minutes,’ and that was Liz Wahl’s resignation. For some reason or another, this neoconservative think tank wanted to put out the message that they were trying to launch this, I would describe it almost like an information war against Russia. Not even just against the network, it was something I think deeper than that for them.

Farron: As you mentioned in the films, they need an enemy. You have to have this enemy to unite the public in your quest for war, and Russia, God, since the Cold War for decades now, that’s always been our go to enemy. ‘Oh, something’s bad. Russia did something that we … We do the same thing elsewhere, but they’re doing it, so now we all have to be against it. Americans unite. We have to be ready to go to war with Putin.’

It’s ridiculous when you consider some of the real foreign policy crises that we have in this world right now. We have areas that are being decimated by climate change, horrible dictators out there, but the U.S. wants to be the police. We want to say that you have to do exactly what we do, exactly what we say. You have to model yourselves after the United States, and we see how well that worked in Iraq, rather than offering help. I think that’s the big problem, is that we’ve turned from a helpful nation into a war-hungry nation.

Robbie: What’s interesting is there seems to be a weird neocon … I would call it almost neocon panic over the Trump presidency. What’s also interesting is I see a problem now, is a lot of Trump supporters are starting to use the term neocon because they see that neocons are actually so upset over Trump, and they’re starting to use it. I always get worried when a vitriolic, blowhard group of people starts using a valid term like that, because there’s always a danger of a word like that becoming meaningless and becoming weaponized in the election cycle.

Farron: Robbie, film series is A Very Heavy Agenda. Where can people find it?

Robbie: They can get a DVD copy of it at averyheavyagenda.com. It’s a three-part series, so it’s actually three different DVDs. They can also watch it streaming online at the same website.

Farron: Excellent. Robbie, thank you very much for talking with us today. We appreciate it.

Robbie: Thank you for having me.