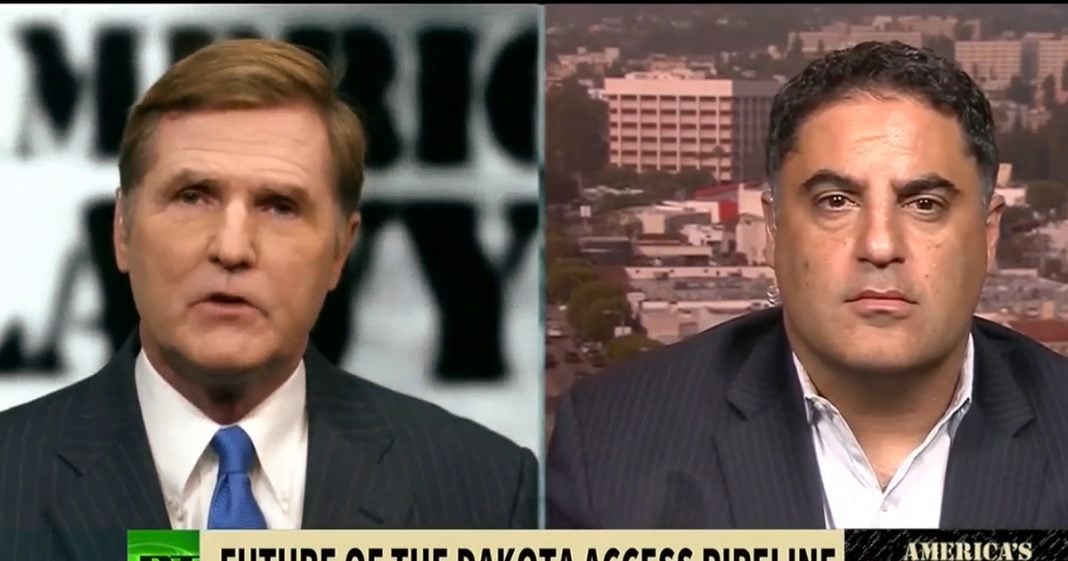 Via America’s Lawyer: Despite a hard fought victory and the halting of the construction of the Dakota Access Pipeline, activists at Standing Rock are staying put. Many protesters fear the victory’s only temporary and it’s only a matter of time before the company starts building that pipeline again. Mike Papantonio talks about about the future of the Dakota Access Pipeline and whether the project can still legally be completed with Cenk Uygur, creator and co-host of The Young Turks Media Network.

Papantonio: Despite a hard fought victory and the halting of the construction of the Dakota Access Pipeline activists at Standing Rock, the reservation, are staying put. Many protesters fear the victory’s only temporary and it’s only a matter of time before the company starts building that pipeline again. They resume construction, nothing changes, that’s what they’re afraid of. Joining me now to discuss whether this is a legal possibility is co-host and creator of The Young Turks Media Network and attorney Cenk Uygur and all-around very sharp guy. Cenk, how are you?

Uygur: Great. Thank you Pap. I appreciate it.

Papantonio: I want to ask you this. What factors do you think made the Obama Administration and the Army Corp of Engineers cave into the demands of these protesters to halt this pipeline? What happened?

Uygur: I think there are three factors. One and most importantly was the protesters themselves. They just would not relent. Whether it was brutally freezing temperatures, assault by the police there, basically acting as the Pinkertons of the modern day era, they just would not give in. That’s why it’s called Standing Rock. They stood like a rock there.

Second of all, the media. We went to go cover it. Now of course mainstream media didn’t. Corporate media was no where near it. For example Young Turks sent Jordan Chariton our reporter there, five different times. Videos that we made were spread all across social media, seen tens of millions of times. Then celebrities started to go up there. We recorded all of that. That got put in all the papers.

Then the third angle was the Veterans for Standing Rock. These guys, led by Wes Clark and Michael Wood, organized initially 2,000 and what wound up being 4,000 veterans to go act as, as they put it, human shields for the Water Protectors. When the veterans were going to show up, all of a sudden, after all of the media attention and the protesters who would not yield, and the veterans come, the Obama Administration decided you know what, maybe we should do something about this. I think that it was a combination of those factors that woke them up.

Papantonio: Yeah. Okay. Where do you think this growing and this very powerful movement should go from here, Cenk? What happens next?

Uygur: Look, there’s this particular issue. Then there’s the issue of oil pipelines all across the country. Then the third part of it is civil disobedience I believe at large. First on the Dakota Access Pipeline, unfortunately this fight is nowhere near over because we found out today that Rick Perry is going to be named the Secretary of Energy. Rick Perry is on the board of Energy Transfer Partners who owns the Dakota Access Pipeline.

The corruption is so brazen. I’ve never seen anything like this. Trump, who owns shares in the Dakota Access Pipeline puts a guy who’s on the board of the Energy Transfer Partners. They’re likely to want to continue to profit off of it. The veterans said hey-

Papantonio: After the decision to halt the pipeline was made, public Energy Transfer partners and Sunoco Logistics responded. I mean they came out and said, this is the quote, that they fully expect to complete construction of the pipeline without any additional re-routing. Nothing this administration has done changes that in any way.

Uygur: That’s exactly right. I’m asking the officials and the police in North Dakota to turn around. What I mean by that is the Army Corp of Engineers has very clearly stated that they do not have permission to drill and that they’re going to do an environmental impact statement which could take months and sometimes even years to conclude. If the company is saying as they are now, that we are 100% going to drill, then the police shouldn’t be facing the protesters. They should be facing towards the company.

Papantonio: Cenk, what I find incredible is that this company has this attitude that they’re bulletproof, that nothing can happen to them. They can do what they want to do. Had it not been for what you did with social media and what other people did in social media, corporate media would not even shown up for this. Did I get that right? Am I overstating it?

Uygur: No. I honestly think that’s absolutely right. We had one video that did over 7 million views on Facebook. It’s been spread all throughout the internet. People know about Standing Rock now. They get confused as to where they heard it from because they did not hear it on CNN or any of the other corporate media. They only show up at the very end. They’re like oh, veterans are coming. Then they’ll come in and buy up all the hotel rooms and pay exorbitant rates. With our ragtag crew of real reporters, investigative reporters, we cover that story from beginning to end. Now it’s a national story.

I just feel like there’s so much more we can do. Today a spill happened, where we found out about a spill that happened in North Dakota of 176,000 gallons of oil. What happened? I thought they said it couldn’t spill. We’ll send reporters there. Wherever there’s news like that the corporate media isn’t going to show up. No problem. Young Turks will show up.

Papantonio: We thank you for that. The violence, was it as bad as we think it was when we saw some of that footage where the violence against these protesters was first of all unnecessary and way in excess of what had to happen? What was your take?

Uygur: Yeah. Absolutely. It’s this arrogant attitude that you were talking about earlier, Pap, where they think I’m entitled to federal land where the Army Corp of Engineers actually has authority. I don’t really care. They feel like they own the government. Your burial land, your water, the Missouri River where they get water not just for the Reservation but for so much of that area in North Dakota, they feel like that’s just mine to take.

In Iowa there’s all these farmers that are fighting back, conservative, rural, farmers because they do eminent domain. They say the government’s going to back me up. You’re going to give me your property. In another pipeline in, down in Texas, the judge had to increase the amount that that particular pipeline was paying to the landowners, by 30 times because they felt like what’s the difference? I’m just going to take your land and not even pay you for it an anywhere near fair market value.

The violence that they did against those protesters was part of that same entitlement. I’m entitled to have you not exercise your rights and get off of your land so that I could build this pipeline. They did the tear gas canisters. They did the water cannons in freezing temperatures. One woman nearly lost her arm. On The Young Turks we covered another woman who was blinded in one eye. This is way disproportionate to what should have happened.