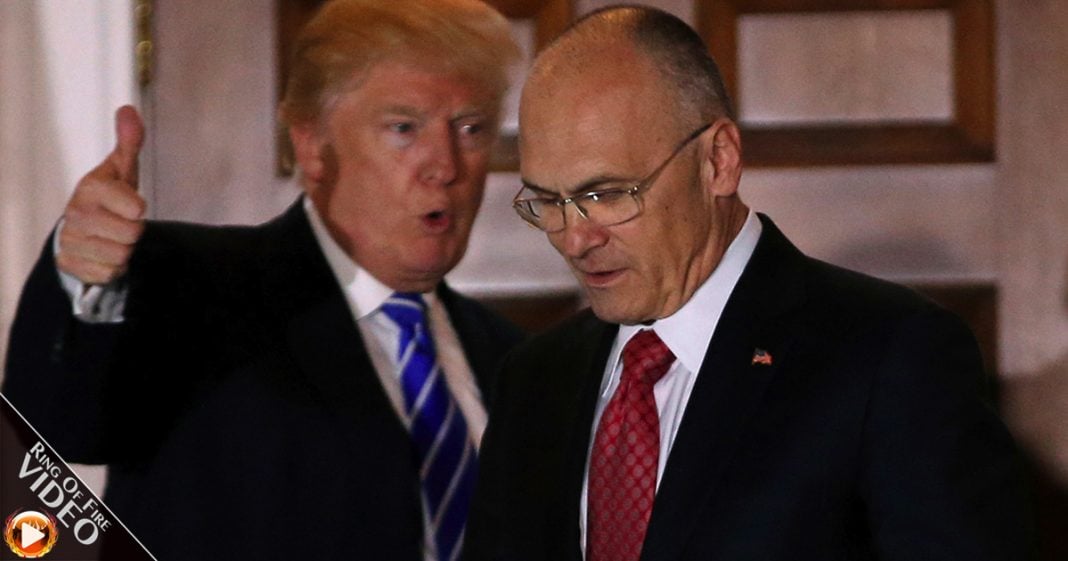 Andrew Puzder, Donald Trump’s pick to be the new Secretary of Labor, said in an interview in 2009 that American workers are “overprotected” and that they shouldn’t even be allowed to take breaks. Sounds like the kind of guy we want laying out the rules for the working class, right? The Ring of Fire’s Farron Cousins discusses this.

This week, an interview with Andrew Puzder from the year 2009 surfaced where Puzder said, ‘Look. American workers are overprotected.’ During that same interview, Puzder went as far as to suggest that American workers should not have mandated break times from either state or federal laws. He doesn’t want workers, basically, to be able to take a break. He doesn’t want anybody stepping in to tell us that workers need a little rest every now and then, so why is this important? Well, Andrew Puzder, as most of you know, is Donald Trump’s pick to be the new Secretary of Labor for the United States, and this is a man who doesn’t believe that workers in the workplace should be protected by federal or state regulations. Now and I know that’s a dirty word. Regulations. Republicans hate to hear it democrats hate to say it, but let me tell you something. Regulations are in place in this country because they are necessary.

They’re created from a need. When too many workers begin getting killed in mine accidents, we came up with regulations. When workers were getting killed in factories because there were no safety precautions, we came up with regulations. Regulations save lives. Regulations ensure the health and safety of American workers and that’s both the physically and financially, and Puzder as recently as two years ago said that, “He is completely opposed to any form of minimum wage,” and of course, this is a guy who is a CEO of Carl’s Junior and Hardee’s, a fast food chain that loves to pay workers minimum wage, and this man is basically telling his workers, ‘If I could legally pay you less, I wouldn’t hesitate to do it, and if I ever get the chance to get in power, you can damn sure bet that I’m going to try to do it,’ and now he’s getting that power from Donald Trump.

Puzder is a disaster for American workers. He’s going to be a disaster for the American economy and that’s not just me saying that. That’s also coming from former Labor Secretary under Bill Clinton, Robert Reich. Reich knows quite a bit. In fact, he knows enough that he didn’t even support Hillary Clinton during her primary campaign. He supported Bernie Sanders, because Reich understood that workers are the ones who need protections. Not the top 1%. Not the CEOs. They have enough protections. They have enough benefits in the form of tax breaks from the federal government, but Puzder wants to undo all of that, and give everything back to the CEOs, because that’s the only reason to ever oppose regulations. Is because you want the owners of those companies to get all the benefits, all those federal perks, and you don’t want to do a damn thing to help the American workers.

That’s what this is about, folks. There is no good reason why anyone should ever want to do away with a federal safety regulation for American workers, unless they’re trying to make a buck off it, or they’re trying to help their friend make a buck off it. That’s what Puzder’s doing, not only for himself, but for all his buddies out there in corporate America, and once again, who gets screwed? Workers. Average American workers, who are already not getting paid enough for the jobs that they do. Puzder’s an economic disaster waiting for happen. Waiting to happen, and the worst part is, if he repeals these safety regulations, he could end up getting people killed, and that’s the worst part of all of this. CEO greed in the United States is going to get people killed, because they don’t want to spend a couple extra dollars to make sure that your workplace is completely safe, and that’s why Trump picked this guy, Andrew Puzder, to be Secretary of Labor, because he’s going to hand everything to the CEOs, while taking everything away from the average workers.