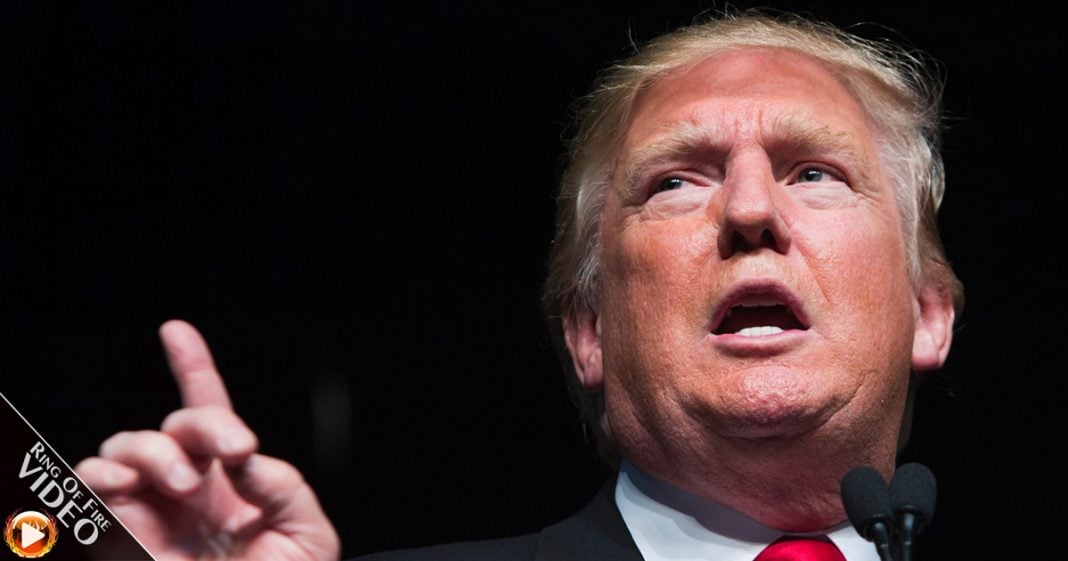 A conservative radio host has figured out why Trump is so dependent on Twitter – it’s because he isn’t smart enough to have a thought that is longer than 140 characters. And judging from the content of Trump’s tweets, this appears to be true. The Ring of Fire’s Farron Cousins discusses this.

Conservative radio host Charlie Sykes appeared on MSNBC earlier this week and explained something that actually makes a lot of sense about Donald Trump’s brain. He told Lawrence O’Donnell that the reason Donald Trump loves Twitter so much and the reason he gets so inflammatory on Twitter is because the man is simply not smart enough to think outside of a 140-character limit. Again, this makes perfect sense. We know from analyses that during the campaign, Donald Trump spoke at his rallies at a fourth-grade level, so a 140-character limit is right up his alley. It’s short enough that he doesn’t have to go on too long and sound like a complete idiot, and he gets to use little bitty tiny words that everybody can understand, including himself.

A couple of days ago, Donald Trump tweets out this thing, “Thought this was going to be a smooth transition … Not,” as if he’s some kind of ’90s throwback weirdo here. Nobody says that anymore, let alone a man who is, what, 70 plus years old, who was just arrested president. You don’t do that. That’s not professional. Even my children who are in elementary school don’t do that because it’s beneath them, but not a guy like Donald Trump because he doesn’t have a brain, at least not enough to even be self-aware. That’s what Charlie Sykes was trying to point out in this interview with Lawrence O’Donnell.

Donald Trump can’t think outside of Twitter. It’s perfect for him to just attack people, for him to say stupid things that you can’t get too stupid because you can’t use that many words. He goes on with his day. Donald Trump’s Twitter account could very likely end up getting the United States attacked by another country because he’s that damn stupid. It could end up costing the economy billions of dollars because the stock market rises and falls with every word the president says. If you don’t believe me, go talk to somebody in finance. They pay very close attention to every presidential press conference, every State of the Union address because they have to because they know that the market reacts to everything the president says and does.

What’s going to happen when Donald Trump … ? I don’t know. Maybe his washing machine breaks down and he tweets out, “Man, GE really sucks.” Their stock is going to plummet because you can’t do that. Again, as Sykes points out, Trump is not smart enough to understand that. Twitter is the perfect outlet for idiots like Donald Trump because you don’t have to put much thought into it. You just go on there, type out a few words and send it out to a few million people. While that’s a good tool for getting important messages out, it’s also a very dangerous tool for someone with intellect as low as Donald Trump’s who happens to be in a massive position of power.