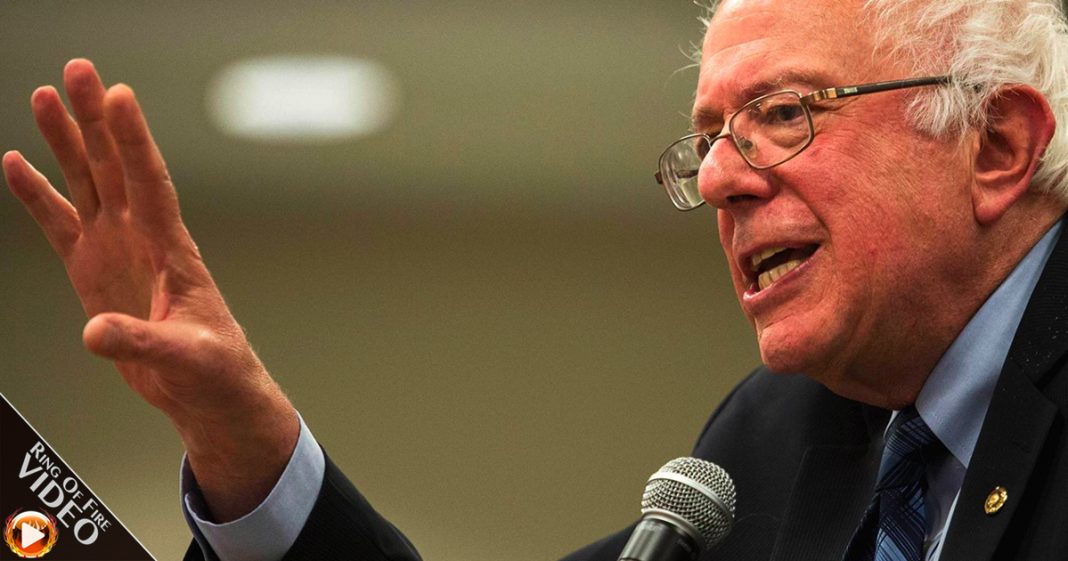 Speaking to Democracy Now’s Amy Goodman just a few weeks after the Presidential election, Bernie Sanders warned of the dangers that the corporate-controlled media poses to our democracy. The Ring of Fire’s Farron Cousins discusses this.

Because think about this, the corporate controlled media does not tell us the truth anymore. They tell us parts of the truth. They tell us bits and pieces here and there, but we know, and we know from experience here, that they do censor what they’re able to tell you. They have to run it through their advertisers sometimes. They have to run it through boards of directors, who also happen to sit on the boards of major pharmaceutical companies, of energy companies, of health insurance companies. Do you see where I’m going with this? The corporate media is a threat to democracy because they no longer do what they’re designed to do, and that is to educate the public about the issues.

They don’t do that anymore, and Bernie Sanders understands that. It’s not necessarily the fact that they don’t do it, it’s the fact that they can’t do it because of their corporate sponsors, their corporate masters. They can’t tell us the truth anymore. When you have a media that wants to sensationalize everything, not only does it harm the public intellect, but it makes us rush into rash decisions. Think about the Iraq War. The New York Times, MSNBC, Fox News, CNN, everybody talking about the fact that Saddam Hussein unquestionably, undeniably was stock piling yellow cake, uranium, aluminum tubes, weapons of mass destruction, biological weapons. My god, this man was about to launch a war against the entire planet and he was going to win if we didn’t take him out right now.

The media helped push that story, and it weakened American democracy. It weakened our national and international standing with the rest of the world. They’re still doing those things. We saw it with Iran a couple years ago. We saw it with Libya. The media cannot be trusted to protect the American public anymore. They’re not telling us about dangerous pharmaceuticals out there that will kill you if you take them as directed. They’re not telling us about health insurance company jacking up prices just for the sake of jacking up prices and getting more money. They’re not telling us those stories, and yes, that is a huge threat to democracy as Bernie Sanders has pointed out. I’ll say now what I’ve said a hundred times in the past. Turn it off. There is no reason, and I don’t care if you like a couple of the hosts or whatever, there is no reason to ever tune in to corporate controlled media. MSNBC, Fox News, CNN. Shut it off and never look back.