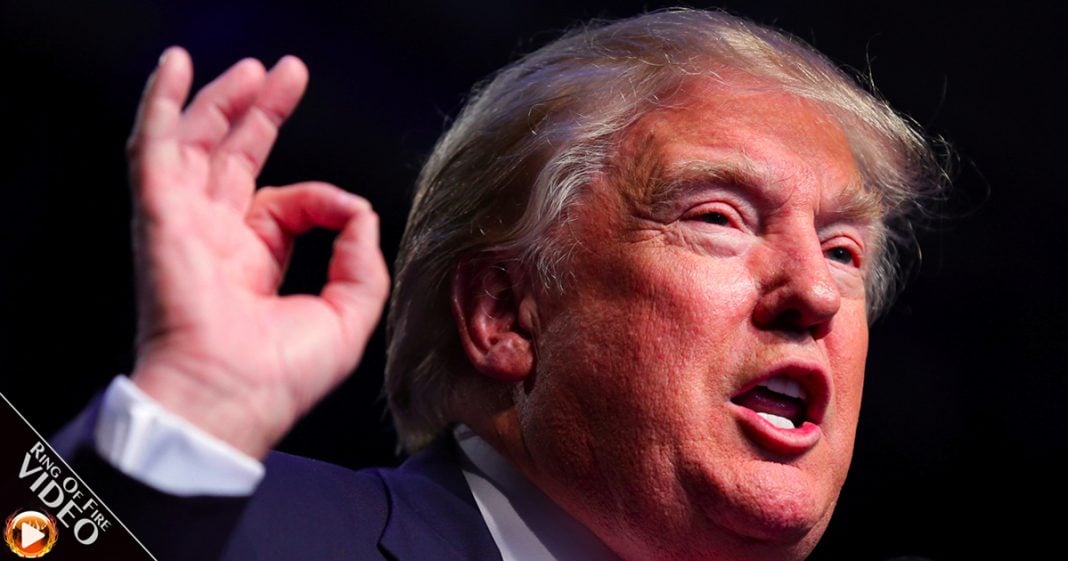 Donald Trump hasn’t been paying attention to the world over the last 40 years, and that’s why he’s wanting to bring back everything from trickle down economic policy to privatizing Social Security. These policies didn’t work in the past, but Trump has no ideas of his own, so this is what he’s going to do. The Ring of Fire’s Farron Cousins discusses this.

It’s no surprise to anyone that Donald Trump has absolutely no ideas in his brain, but that’s also very dangerous for a man whose about to take over the country. So what is he going to do when he finally gets sworn in as president, and has to legislate, has to act, has to do things in a presidential way? Well we already have an answer to that. The answer is that Donald Trump is going to do the same stupid things that the Republican Party has been trying to do for the last 40 years. We’ve already seen his commitment to the failed concept of trickle down economics with his promise to lower taxes on the wealthy in hopes that will eventually trickle down to the working class, even though precedence tells us that is not physically possible.

Furthermore, he wants to do every horrible thing that Republicans have suggested over the years. Think about this, we have had Republicans here and there that have suggested bits and pieces of some of these things, privatizing public education, privatizing Social Security, getting rid of Medicare and Medicaid, repealing Obamacare, you know little things like that. It’s always been one guy or one woman suggesting one of these things. Donald Trump is hoping to do all of these. With his cabinet appointments he is on his way to doing these things. The people in charge of their respective organization like Betsy DeVos in Education, Ben Carson in Housing and Urban Development, Rex Tillerson as Secretary of State. These people want to use these offices to destroy the structures that we have in place with our federal government.

Donald Trump is okay with that because he doesn’t know any better. I know he likes to tell us that he’s a real smart guy. When it comes to things like governing, enacting policy, protecting 330 plus million people, Donald Trump is a very dumb guy. He does not know what he’s doing. He does not know how to handle this job. He does not know what the hell he’s going to do. That’s why he’s put these idiots in place in these cabinet appointments, so that they can destroy the basic foundation of our federal government. It is these ideas that they have, privatization, privatization, privatization that Republicans have been pushing for 40 years, and they always fail.

Let me ask you, what was the last good policy that came from a Republican? Go ahead, think about it. You can’t think of anything, can you? When was the last time Republicans ever did anything that benefited the American public and not only corporations? It doesn’t exist. Probably the last good thing Republicans did was Richard Nixon when he created the Environmental Protection Agency. Beyond that, it’s been a crap show. Ronald Reagan did nothing for the American working class or underclass. George H.W. Bush got us involved in a Middle East entanglement. George W. Bush got us even deeper into that Middle Eastern entanglement. Nothing good comes from republican policies or politics.

Donald Trump is doubling down on every single failed idea that the Republican Party has put forth for the last 40 years. He is going to implement them. This is not a hypothetical anymore. This isn’t hyperbole. We are going to see to an extent privatization of the education system. If he is successful, we will see privatization of the Social Security system, which will destroy the program as we know it. We’re going to see a full repeal of Obamacare most likely. The Republican Party still to this day have stories coming out saying that they have no idea how they’re going to replace it, they just know they want to get rid of it. More than 20 million people suddenly without health insurance in the United States. How is he going to handle that? He doesn’t care. He doesn’t know, but it doesn’t matter. For Republicans, nothing has ever mattered except how much you can give away to wealthy corporations. We’re going to see that under Donald Trump in a way that we have never seen it in this country before.