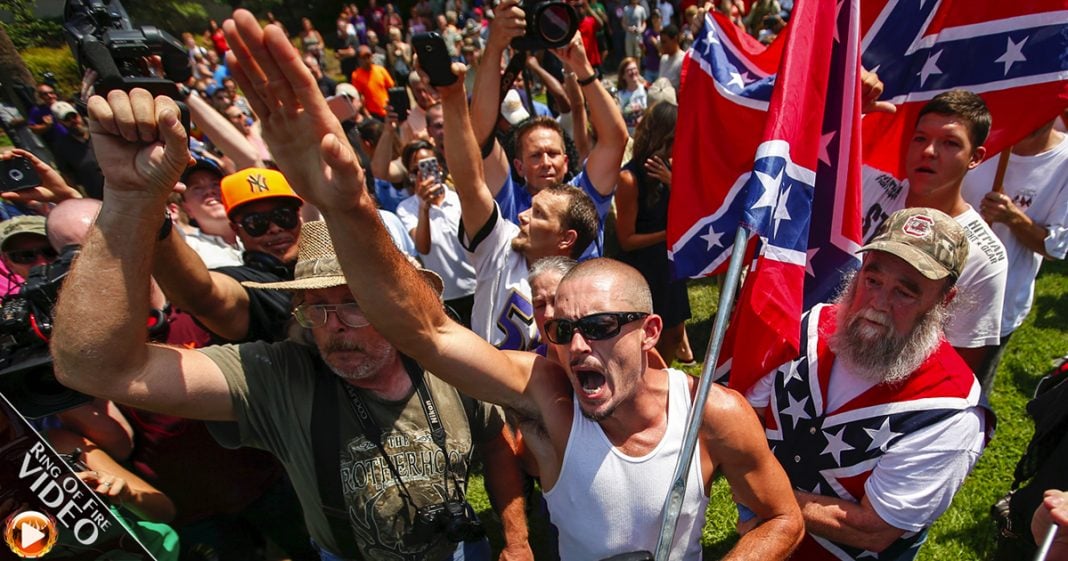 White Supremacists are worried that Trump may have just been pretending to be a hatemonger, so they’ve issued a stern warning to the President-elect: Keep the white supremacist rhetoric flowing or face a neo-Nazi backlash. The Ring of Fire’s Farron Cousins discusses this.

The so-called alt-right is already pretty unhappy with Donald Trump. Now when we say alt-right, what we really mean is the hateful fringe of the United States population. Those folks, the folks who helped to launch Donald Trump’s political career and helped to put him in office, are very mad right now because they’re afraid that they may have also been conned, like the rest of middle America, into believing that Donald Trump was actually a white supremacist, so they have come out and said, if Donald Trump does not stick firmly to those white supremacist teachings that he espoused during his campaign, there will be a full on revolt from the white supremacist community.

This is coming from people like Mark Weber, Jarrod Taylor, David Cole, all of whom run some form of different media outlet aimed at either denying the Holocaust, at trying to expose some sort of Jewish Zionist control of the country, or just flat out saying that white people are the best people. Those are the guys right now who are so mad that Donal Trump appears to be backtracking on all the white supremacy he threw out during the campaign.

What this story really tells us is that you cannot make the argument that Donald Trump won the election because he spoke to middle America and addressed their fears. That played a part of it, but the biggest thing that put Donald Trump into the White House is racism. We see that. We have people out there who are angry because Donald Trump is currently not being racist enough. They thought they had a guy in their pocket who was going to be everything that they were, except powerful.

Now they’re angry. You cannot logically make the argument that Donald Trump won only because he was able to speak to this white working class that was struggling in America. Again, that played a role in it, but you cannot deny the role that the white supremacist played and you cannot deny the rhetoric that Donald Trump espoused during the campaign. He was very clear about his hatred of Muslims, very clear about his hatred of people of color. That is who Donald Trump is, that’s what these people wanted in a president and that’s why they flock to him.

Again, that’s not saying that all Trump supporters are racist, but there’s an argument to be made that all racists are Trump supporters. Two groups not necessarily mutually exclusive, but they’re there. The next time you hear someone tell you that no, no, no, Donald Trump supporters aren’t racist. He’s just the populist guy. Show them this story. Show them Rory Carroll’s work in The Guardian about the white supremacists who are planning to revolt, violently if necessary, if Donald Trump doesn’t stick to his white supremacist talking points.