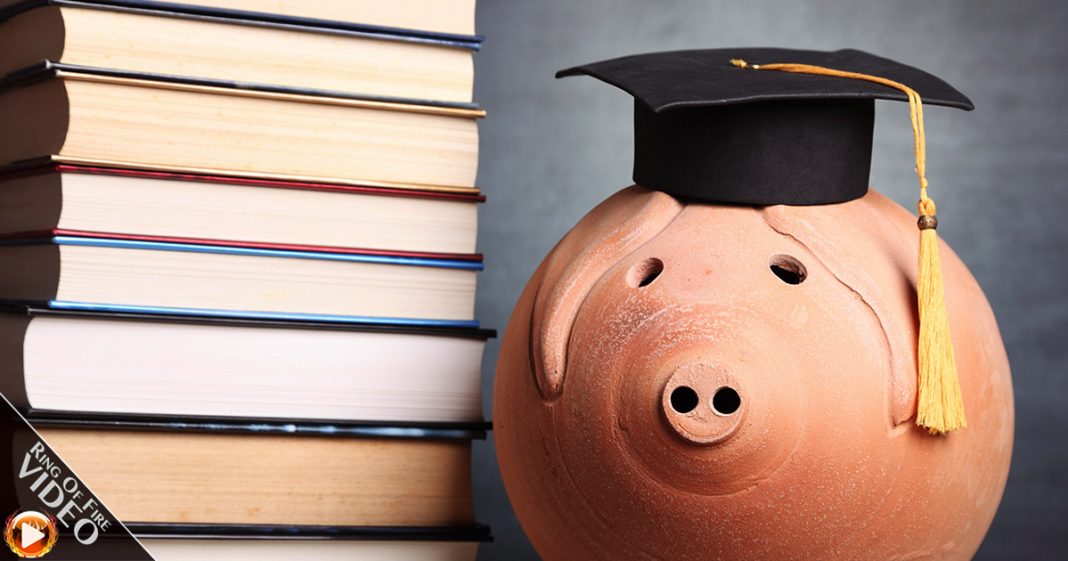 With a renewed sense of urgency, Democrats in the Senate are pushing for mass student loan debt forgiveness before Donald Trump takes office. The Ring of Fire’s Farron Cousins discusses this.

With less than a month before Donald Trump officially gets sworn in as the next president of the United States, democrats in the senate are working tirelessly to pass through a package that would provide student loan debt relief for students who were ripped off by for-profit college scams, much like Trump University.

The reason they’re trying to do this right now is actually because they understand that Donald Trump, as someone who ran one of these phony for profit universities, he will do nothing about the matter and doesn’t understand that it’s actually a problem. Other students, students who went to DeVry University that recently settled a massive lawsuit, they’re saddled with these debts from these colleges that did not provide an adequate education. Many of them have actually gone out of business. Some of them weren’t even accredited, yet these students still racked up 30, 40, 50 thousand dollars worth of debt to get a degree that is essentially meaningless and worthless.

That’s what senate democrats are trying to do right now. It would be obviously a lot better if they were trying to come up with a packet, a relief package, for everyone, but at least they’re taking care of those who were really screwed over by the system. That is a great first step. It’s great that senate democrats are doing this. Hopefully they have enough time before Trump gets sworn in to get this relief package passed and signed by President Obama.

We can look at the statistics. Billions of dollars in the United States for a generation that can’t find work, and they’re straddled with debt, billions in debt combined. That’s the problem. It’s not just, “Oh, we’ve got student loans and we can’t repay them.” No. Nobody’s complaining about that. They’re complaining about the fact that they work so hard, got these degrees, and now they’re entering a job field that’s quite frankly horrible. Yeah, the economy’s adding new jobs, but they’re not jobs that pay enough to pay off these debts from these predatory banks and the federal government.

Relief has to happen. Sorry, that’s just they way it is republicans. I know you don’t like to talk about that, you don’t like to give subsidies or extend a helping hand to average citizens, but you’re going to have to. Again, cut the seven billion dollars a year that we give to the fossil fuel industry in subsidies, and use it for student loan debt relief. You could solve the problem in two or three years. Done, forever, gone. Just by cutting those subsidies. That’s all you’d have to do, but you’re not willing to do it, because it’s not students saddled with student loan debt that are paying for your campaigns. It’s people like the fossil fuel industry, or the people on Wall Street that are profiting off the student loan debt crisis.

I guess until students decide to start taking out loans to donate to politicians, we probably won’t get a real solution to this problem until we get Donal Trump out of the White House, and put in a president who at least has a little bit of common sense. Hopefully somebody that sounds a lot like Bernie Sanders when he talks.