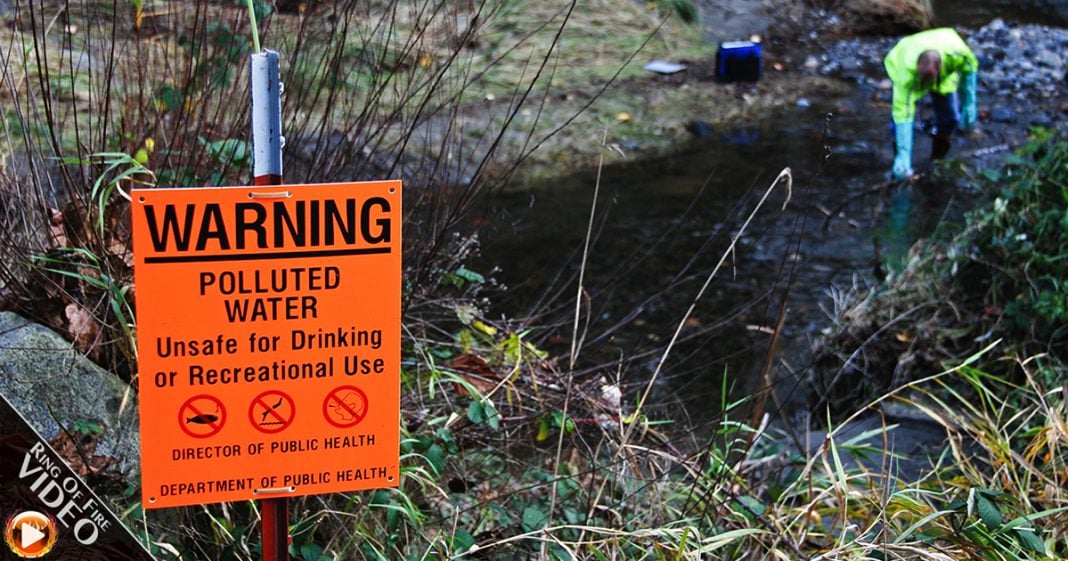 The water crisis in the United States stretches way beyond the city of Flint, Michigan, and at the heart of all of these problems is dysfunctional, Republican-controlled government. The Ring of Fire’s Farron Cousins discusses this.

The water crisis that’s been taking place in Flint, Michigan has made the news because of just the catastrophic levels of failure on behalf of the republican controlled government, the environmental protection agency and the environmental destruction being caused by that specific crisis. However, according to a new Reuters analysis, there are at least 3000 other places within the United States that have lead contamination in the drinking water that actually exceeds the level that we’re seeing with the Flint water.

The reason, obviously, these stories don’t make it to light is because when you’re a traditional mainstream corporate media outlet, these stories aren’t that fantastic. They’re not that great. They’re not going to pull in all the eyeballs but this is a very real crisis that we’re having in the United States and it’s great that at least a little bit of attention has been paid to Flint, Michigan but we have to focus our attention on all of these problems and we also have to understand that just like Flint, Michigan, these other places where the water is contaminated with lead at higher concentrations than we see in Flint are the direct result of republican controlled government.

Republicans in Washington, DC have been blocking infrastructure spending bills for years. Those infrastructure spending projects that republicans don’t want to allow include updating water supplies, water delivery systems in areas of the country where the system is dilapidated and those are where we’re seeing the higher concentrations of lead. Furthermore, most of these areas that have high concentrations of lead and water contamination, they just so happen to be in Republican controlled states. Alabama, Mississippi, Georgia, Florida, the Midwest, Michigan. The common thread is republican government here and that’s what we get with republican rule.

That’s harming that fetus. That’s destroying that fetus’s life. Yeah it’ll live but it’s going to have a horrible rough life because you fed them lead and screwed brain myelination and development. That’s on your hands, republicans. It’s on your hands that we can’t get an infrastructure spending bill that fixes these problems. The people are using 50, 60 year old lead pipes to deliver water to their homes because that’s all the government would pay for. That’s on you republicans.

As we head into 2017, this issue, these water crises, taking place across the United States, this should be our number one priority, if not number one, at least in the top five because we’re talking about people’s lives here. The very basic bodily requirement of water is essentially being denied to US citizens and again, it’s coming at the hands of republican government.