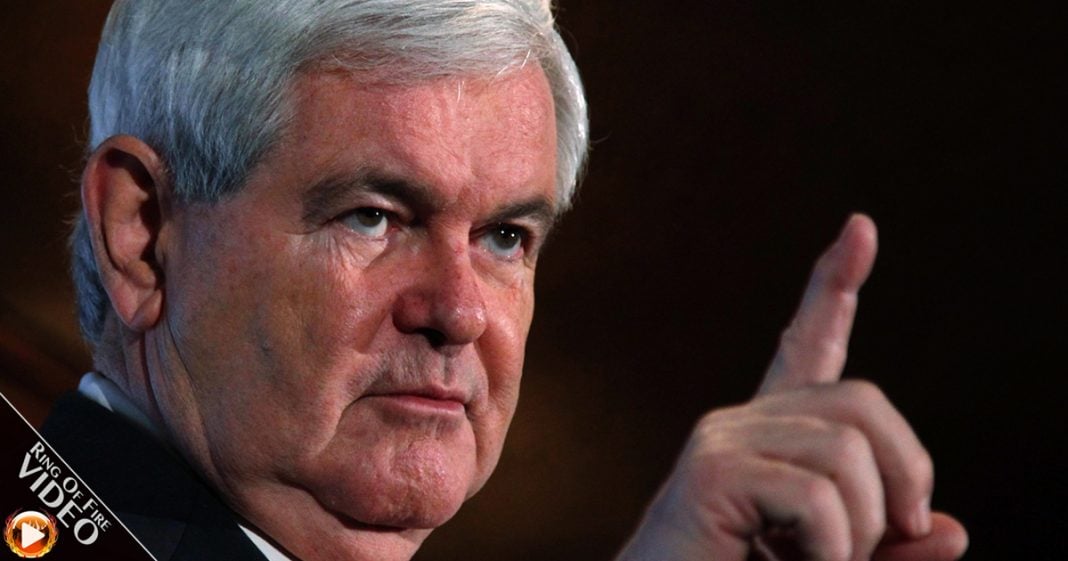 Newt Gingrich recently told The Washington Post that Donald Trump will be launching an “all out war” on the “federal bureaucracy” when he takes office, and Gingrich thinks this is great. Well, it’s not so great if you don’t happen to be a part of the top 1% of income earners, but that doesn’t matter to Republicans. The Ring of Fire’s Farron Cousins discusses this.

In a recent interview with The Washington Post, Newt Gingrich, former Speaker of the House and well known Republican jackass, told The Washington Post that under Donald Trump, it is going to be all out war on the federal bureaucracy. Now what that means, bureaucracy, it means federal regulations. We have already see Donald Trump’s disdain for environmental regulations. He promised us countless times during the campaign that he was going to get rid of all those suckers. It’s not just the environmental regulations that they’re going to go after. Labor laws, those are going to die. Business regulations, safety regulations, simple things like saying your employees have to wear hard hats that the company has to provide. Well that costs the company money. They don’t want to do that.

Overtime rules could be killed. That’s what Gingrich is talking about. It’s not just the environmental regulations that we have discussed a lot. It’s all federal regulations. You see, the basic core of Republican political philosophy is that government is evil. I guess they don’t see the irony as being government officials who hate the government. I guess the voters don’t see the irony in voting for somebody to serve in government who hates the government, and wants to kill the government. Kind of seems pretty stupid when you think about it that way, right? That’s what Republicans like Gingrich want to do, and that’s what Donald Trump is going to deliver to them. It’s what they’re going to deliver to big businesses and Wall Street banks.

Fossil fuel companies, you want to dump your toxic waste out in the environment? Go ahead. Doesn’t matter. We’re Republicans, we don’t live near that crap. We’re part of the 1%. That’s what Newt Gingrich was telling The Washington Post. He didn’t use those words, but that’s what he meant, because that’s what Republicans always mean. When they attack the federal bureaucracy, they’re attacking regulations. You know what a better word for regulations actually is? Safety standards. That’s the phrase we should be using to describe federal regulations.

Republicans hate the government. There’s no other way to say that. Republicans hate the government. They hate that the government can come in and tell a corporation, “Hey, make this place safe for your employees. Make sure they can’t fall down a rickety stairwell, or get killed by the equipment they use everyday.” That’s it. Doesn’t seem like that should be a big deal. These regulations exist because there was a time in this country where we didn’t have them, and employers were letting their employees get killed. The government had to step in to stop that.

It’s the same reason we have warning labels on products that we buy, folks. Those exist because at some point some asshole decided to use it in a improper way and got himself killed, or hurt, or injured, or did that to someone else. That’s why federal regulations are there, to prevent corporations from screwing over their workers in one way or another, and for protecting the environment, and for protecting us from predatory bankers.