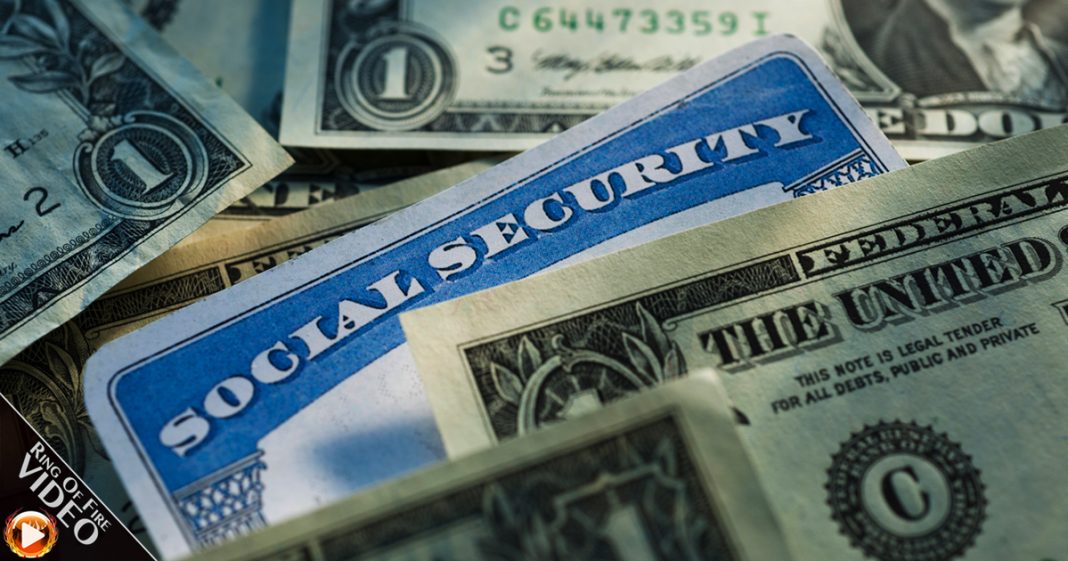 Now it becomes clear: the right-wing corporatist fascist pigs of GOP and their allies figured out a long time ago how to repeal Social Security – through the back door. That “back door” is referred to as the “Student Loan Crisis” – and it’s costing elderly retirees the very Social Security payments for which they have earned their entire working lives.

The corporatists in Washington D.C. who serve only the 2% and spit on the rest of the country like to attribute the student loan crisis to laziness and lack of initiative and “personal responsibility” on the part of debtors, but it is a monster of their making – and they have made certain that monster will continue to suck the lifeblood out of everyone who believed that an education was their ticket to economic security.

This manufactured crisis is affecting college graduates in virtually every age bracket. However, a recent report from the Government Accountability Office requested by Senators Elizabeth Warren (D-MA) and Claire McCaskill (D-MO) indicates that it is hitting people of retirement age particularly hard, pushing tens of thousands of elderly into poverty as their Social Security checks are garnished in order to recover loan payments.

The worst part of it: nearly 70% of the time, virtually none of that garnishment goes toward paying down the principal. Au contraire – it’s going right into endless usury payments (that’s a fancy word for “interest”) and “fees”. This traps those who are drowning under the loans for as long as possible.

And this cycle of loan slavery doesn’t end when the debtor dies; lenders can then go after the debtor’s heirs (who likely already struggle with their own student loan debt), and the cycle goes on.

To add insult to injury, the Wall Street and financial “services” industry slaves in Congress have made certain there is virtually no escape – not even through bankruptcy. Unlike most forms of unsecured debt, student loan debt is non-dischargeable in bankruptcy. In a rare bi-partisan display of betrayal, you can thank President Bill Clinton and then-House Speaker Newt Gingrich for that; prior to 1996, student loan debt was dischargeable.

It is yet another (!) example of how the plutocracy has rigged the game of capitalism; under a truly free market system, lenders assume a risk when issuing a loan that the debtor might default on the loan. However, in the fine, uniquely American form of beneficial socialism for the wealthy and powerful and crippling capitalism for everyone else, the sellouts of Congress have made sure that their corporate pimps are shielded from such risks.

They’ll get it no matter what – and the rest of us are paying the price.

Do the math. That’s $1.65 million – a drop in the bucket compared to the federal government’s annual tax revenue, but it all things considered, it represents an onerous burden for seniors already struggling to get by.

At the same time, younger people are graduating into an uncertain job market and a dysfunctional economic system that demands more and more while giving less and less to everyone but the Donald Trumps of the world. These young people are unable to buy homes, start families, or fully participate in the greater economy by purchasing good and services that create jobs and drive the system.

This is a situation faced by no-one else in the industrialized world. Virtually every other democratic country on the planet allows people to go to college and even onto advanced doctoral degrees – including MDs free of charge. Have you noticed that most primary care physicians in the U.S. are from foreign countries? There’s a reason for that.

Yes, taxes in such countries are higher because those governments realize that an educated populace is an investment for society, but not everyone qualifies to go to college – those who do not qualify are eligible for other job and career training. In addition, many such countries – like Germany – require that young people perform a period of national service in exchange for receiving an education.

Most Americans would have no problem with that. In fact, there are ways to get student loan forgiveness in exchange for doing some kind of community service. Unfortunately such programs are few, and only a limited number of people can qualify. Were such programs available in the U.S., it would be more difficult for the financial sector to keep its jackboot on the neck of those who actually work making tangible goods and providing actual services to society (as opposed to those who sit on their asses on Wall Street figuring out how to game the system and steal from everyone else).

What the end of all of this will be is anyone’s guess. There have been calls to cancel student loan debt, just as the federal government bailed out Wall Street in 2008, but since those people are “natural” people and not “corporate” people, their cries are falling on deaf ears.

Senators Sherrod Brown (D-OH) and Ron Wyden (D-OR) have written a bill that would repeal the 1996 law and allow student loan debt to again be discharged under bankruptcy – but with our new Führer now ready to be installed in the White House and a Conggress now held hostage by a pillaging, self-serving GOP, chances are that bill will never see the light of day.

Will it take a wholesale economic collapse – or worse – for real change? Only time will tell.