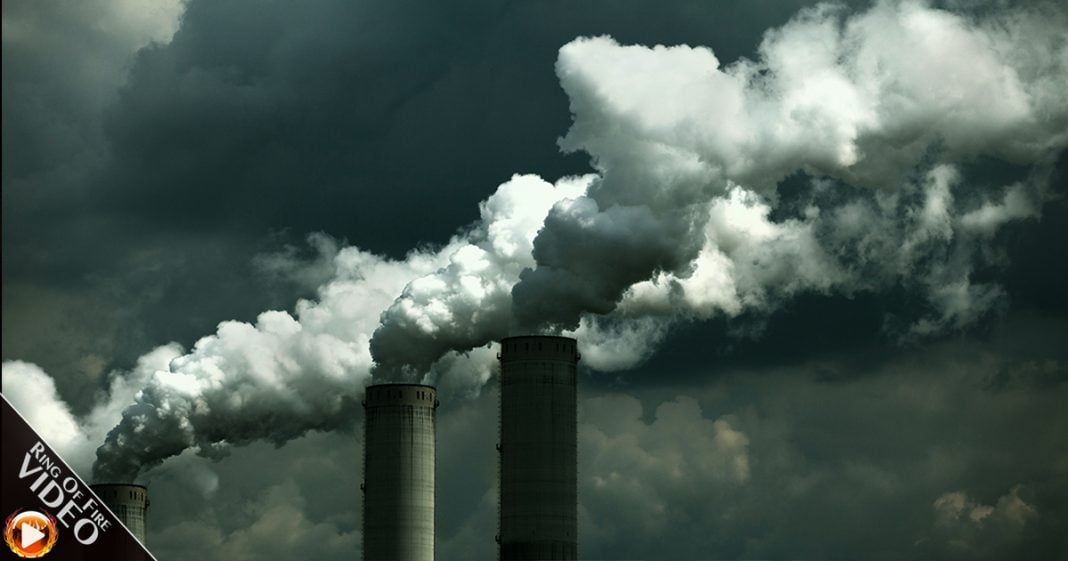 Whether its droughts, floods, or wildfires, the last few years of extreme weather events have been catastrophic in the United States. And according to an analysis by scientists, most of these events are related to climate change, and therefore could have been entirely avoidable. The Ring of Fire’s Farron Cousins discusses this.

The National Oceanic and Atmospheric Administration, NOAA or NOAA has come out and said that they have analyzed extreme weather events for the year 2015 working with 116 different scientists from all around the globe, and they have determined that of these 30 events, at least 24 of them can be linked directly to climate change. Now, some of the things that they did not include or that they said could not be directly linked to climate change were extreme cold weather in the northeast of the United States, heavy rainfall in areas of India and Africa. Those are things that typically do happen, therefore, they’re not going to say that climate change directly cause these. Here’s what they did link though.

In September 2015, residents in the city of Miami, Florida, woke up to find their streets flooded. It wasn’t from rain. It was a beautiful sunny day, had been for days. It was because that’s just where the high tide rises to now and it’s been doing that now for over a year, water in the streets of the city of Miami because that’s just where the tides go now. That is something that they linked to climate change. Extreme heat waves throughout the United States, they said, ‘Climate change.’ Wildfires and droughts in California and elsewhere in the United States, that was climate change. You see, they’re not looking for just any reason to say that climate change is real. That’s why they ruled out things that typically do happen.

They even ruled out some things that I personally would have thought were related to climate change and yet they said, ‘No. This is just something that can be expected.’ The bottom line is that 24 out of the 30 most extreme weather events that they looked at, again with 116 scientists from all around the globe, they directly linked those back to climate change and said, ‘Climate change is the cause.’ You know what that means? That means that 24 of the 30 most extreme weather events for the year 2015 were completely avoidable. Had we taken action in the 1980s when Dr. James Hansen went to Congress and explained climate change, those things wouldn’t have happened. The people who died in those events would still be alive.

We have pissed away almost 30 years of doing nothing on the issue of climate change. Donald Trump is about to be sworn in in a month or less than a month, I guess. He doesn’t even believe that climate change is real. He has packed his cabinet with climate change deniers and some of those deniers come directly from the fossil fuel industry like Rex Tillerson. We’re out of time, folks, and I say that a lot because it’s true. Climate change is the greatest threat to the planet. It’s not Islamic terrorism. It’s not right-wing idiots like Donald Trump, although I’d probably give that a close second. It is climate change. We’re seeing hundreds of thousands of deaths each year as a direct result of extreme weather events, hundreds of thousands, fourth leading cause of death around the globe, and yet we still don’t think we should act on it.

The majority of Americans, Democrats, Republicans and Independents and everything in between believe that climate change is real. Unfortunately, not a majority of all of those groups believe that we should be acting upon it, and so what’s the point? Why believe in it if you don’t think we should do anything about it? I’ll tell you why. The reason though there’s such a discrepancy in those numbers is because most people have already given up hope. They believe in climate change. They just think, ‘We’ve let it go too far’ or ‘It’s going to be too costly’ or that ‘There’s nothing we can do at this point.’ Believe me, there’s a little we can do. We can’t negate everything at this point. We pissed away that opportunity. We could have, but we didn’t, but we can still prevent things from getting too much worse.

Yeah, we screwed the planet, guys, and we’re going to have to live with that and what it means, but we could prevent it from getting worse. We’re just not willing to do that. The question is, how many more extreme weather events do we have to see before we get off our asses? How many more people have to die before we say that, ‘You know what? Maybe fossil fuels aren’t the way of the future. Maybe using the same kind of fuel like coal, gas that people have been using for 300 years, maybe, maybe we could try something else.’ Technology has evolved a lot in the last two, three hundred years. I would hope that our energy policy could do the same.