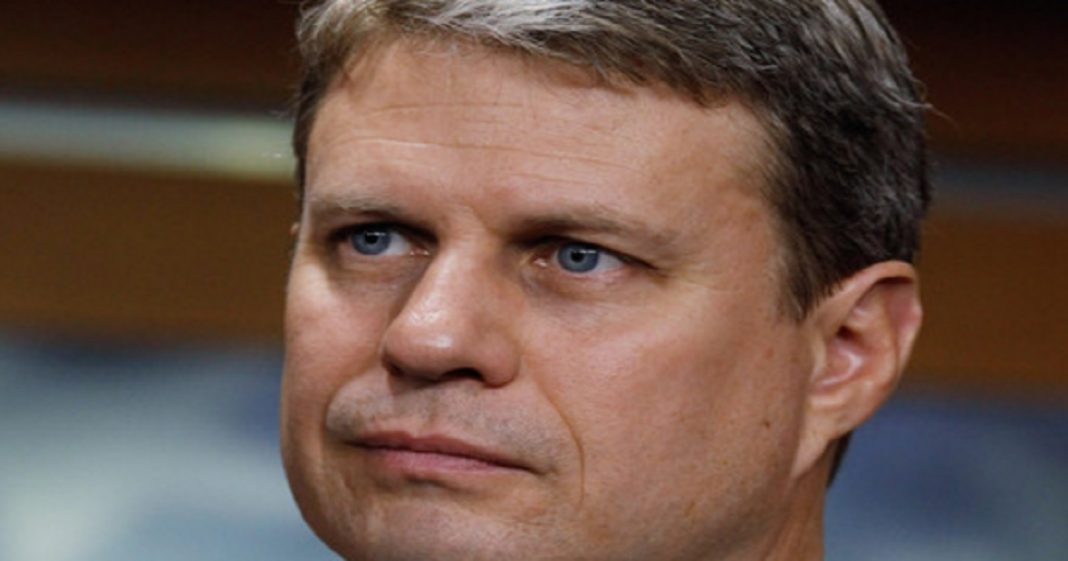 The right wing scum that now control the Executive and Legislative branches of government and will soon be controlling the Judiciary have made no secret of their hatred for the very government they are supposed to be serving and their contempt for the people they govern.

However, Michigan Representative Bill Huizenga has taken this to a whole new level, allowing his own 10-year-old son to suffer in pain overnight – just to prove a point about how “wasteful” the health care system is. Furthermore, he has no shame about it whatsoever.

Huizenga represents Michigan’s 2nd District. Like his fellow Repukes, he hates the fact that anyone has been helped by the Affordable Care Act and is salivating at the prospect of stripping tens of millions of Americans of their access to health care services and consigning them to the good old GOP “Pay or Die” system.

What’s his great idea? Shifting more of the costs onto patients in order to “reduce costs.” The ways to do this, says Huizenga, is to increase insurance deductibles (already insanely high for many people, ACA notwithstanding) and “incentivizing” them to use “health savings accounts” instead. This is a great idea if you make a high six or seven-figure income – but hardly practical for most working families who spend most of their income on basic food and housing.

“At some point or another we have to be responsible or have a part of the responsibility of what is going on…way too often, people pull out their insurance card and they say ‘I don’t know the difference or cost between an X-ray or an MRI or CT Scan.’ I might make a little different decision if I did know [what] some of those costs were and those costs came back to me.”

You’ve got to hand it to Bill: when the rubber meets the road, he put his money where his mouth was. The problem is that he used his own 10-year-old son, Sieger, to make his point.

He brags that when Sieger fell and injured his arm, he didn’t do what any truly loving and concerned parent would do – which is to take the suffering child to the emergency room. Instead, he and the boy’s mother, Natalie, decided that since they didn’t know if Sieger’s arm was broken or merely sprained, they could wait until the next morning at 10 AM in order to take him to their regular primary care physician.

Huizenga says, “We took every precaution but decided to go in the next morning [because of] the cost difference.”

It wasn’t about his own child suffering. It was about dollars and cents. It was about his warped idea of “saving” some multi-billion dollar health insurer a few bucks on a claim.

If that doesn’t constitute child neglect, it’s hard to know what does. A broken bone that goes untreated can quickly result in numerous, serious complications that include permanent nerve damage, necrosis (death) of bone tissue, bone infections and a potentially fatal condition known as osteomyelitis – an inflammation of the bone and bone marrow.

This is what U.S. Congressman William Huizenga of Zeeland, Michigan, was willing to risk for his son – all in order save a few bucks and prove a political point. And this is what he and the rest of the corporate sell-outs in the legislature want for the American People.

One of the ironies surrounding the whole health care issue (and there are many) is that virtually every other developed nation on the planet figured out long ago that providing guaranteed, single-payer health care to its citizens (and usually, anyone else living there) is actually cheaper for society in the long run. People who are able to maintain their health and get care when needed without worrying about the cost are more productive, are able to make greater contributions to society, and pay more taxes.

When individuals are not cared for and their illnesses go untreated (as happened far too often before the ACA went into effect), they miss work or have greater difficulty holding jobs, are less productive, and they ultimately cost all of us more when they finally do show up at an emergency room and are unable to pay.

As for this idea of “health savings accounts” – well, treatments for catastrophic illnesses like cancer or a major auto accident can easily run into the hundreds of thousands of dollars – even up to a million, in some cases. Even some chronic diseases, such as diabetes, can cost a patient $1500 a month or more. Even assuming one makes the median household income of around $4300 a month, considering the costs of basic food and housing, coming up with that much in order to treat a chronic condition would be challenging, to say the least.

This is how low we have fallen – electing a politician who is so calloused, so cruel and spiteful that he is willing to allow his own child to suffer in the name of “fiscal responsibility.” And this is what lies in store for most of the country, if these corrupt individuals are allowed to follow through on their plans.

Meanwhile, if this story has you riled, you can call the Michigan Department of Health and Human Services child abuse and neglect hotline at 855-444-3911. Chances are, nothing will come of it – we’ve already seen that in Trump’s new America, people like Huizenga are above the law and aren’t bound to the same rules and standards to which the rest of us are held – but perhaps we can at least inflict the humiliation and embarrassment a parent like him surely deserves.

That’s assuming Huizenga has any shame.