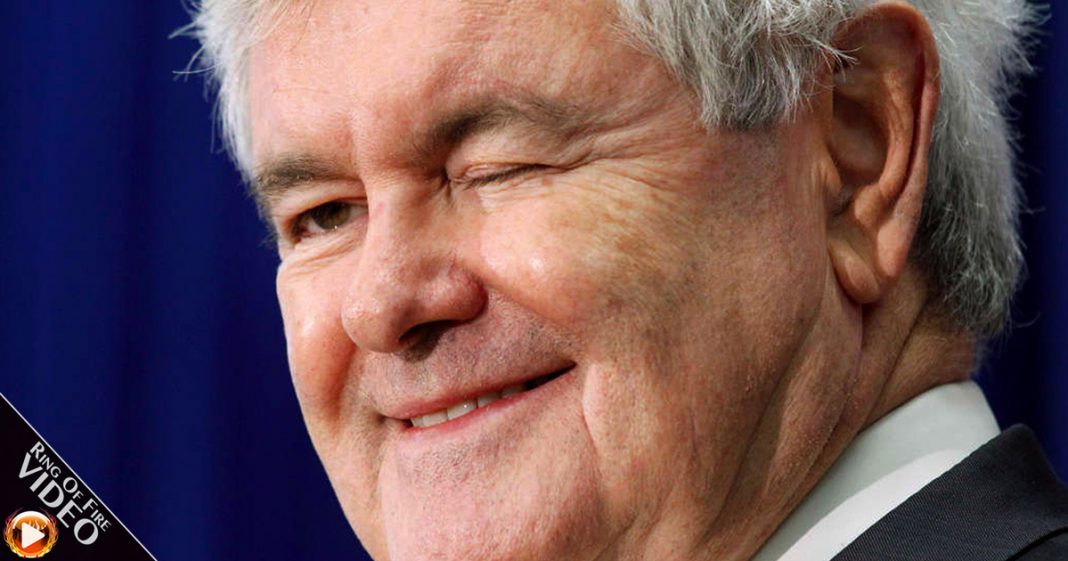 Newt Gingrich has emerged as one of the strongest Donald Trump supporters in recent weeks, and now he’s telling reporters that Congress needs to change ethics laws so that Trump doesn’t get in trouble. Basically, he knows that Trump will break the law, so let’s make his actions legal ahead of time. The Ring of Fire’s Farron Cousins discusses this.

During an appearance this past Monday on National Public Radio, Newt Gingrich told America that, ‘Look. Donald Trump is gonna have a hard time overcoming all these ethics laws that we have in place.’ In my Newt Gingrich opinion, the best thing we can do is just change the laws to allow him to break them but not really break them. What? Newt Gingrich this week suggested doing away with ethics laws so that Donald Trump doesn’t end up breaking them and therefore committing an impeachable offense which the Democrats would jump on and get him out of office.

Newt, that’s not how the law works. If you’re afraid somebody is going to break the law, that’s why we have the law. You can’t go out there and say, ‘Well, look. A lot of people are gonna get murdered. So if we just do away with murder laws, you know, then they’re not breaking anything.’ You’re an idiot, Newt Gingrich. You have become this disgusting, not that you weren’t already, this super-disgusting, horrible, troll, mutant, human being, goblin, greasy, gross, little ugh. That’s what you are, Newt Gingrich. That is the perfect way to describe you, the same man who served his wife divorce papers while she was in the hospital getting treated for cancer. You are probably one of the worst people in the United States. I’m going to go ahead and put you in the top 10, Newt Gingrich.

If you’re afraid that your candidate is going to break, I’m sorry, you’re president-elect is going to break election laws or campaign laws or presidential laws or federal laws or state laws or international laws, then you probably picked the wrong candidate. That doesn’t get through to you. No. You just sit there with your third, fourth, whatever wife you’re on right now enjoying your paychecks that you’re probably still getting from Fox News, your checks you’re getting from the Trump Administration, and you sit there like a fat little pig telling the rest of us that you’re better than us and that your president-elect doesn’t need to follow the laws. You are a disgusting waste of oxygen.