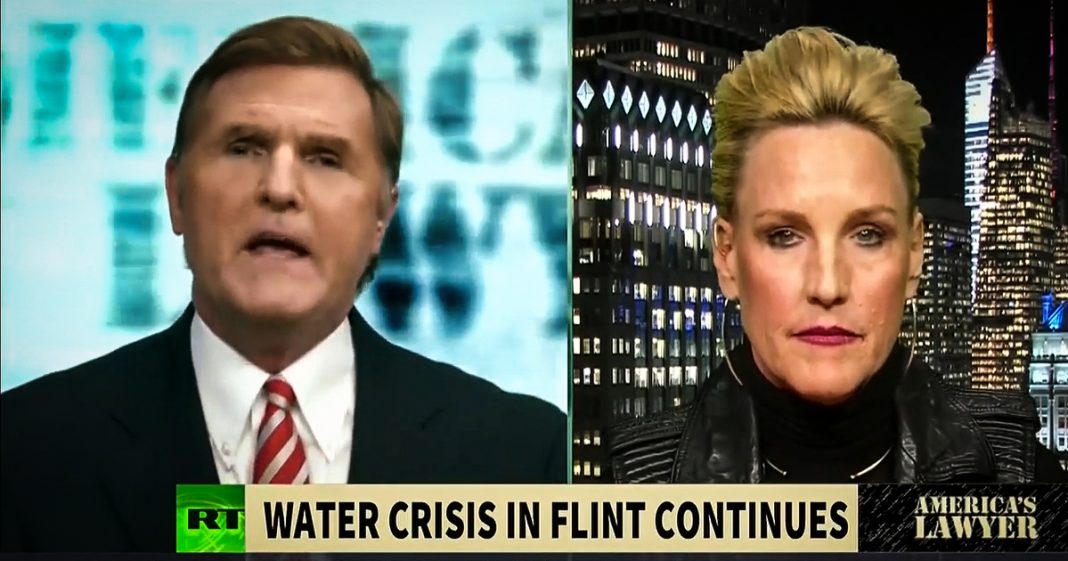 On the premiere of America’s Lawyer, Erin Brockovich joined Mike Papantonio to discuss the ongoing crisis in Flint, Michigan, which has transformed from an ecological and health disaster into a complete economic meltdown.

Papantonio: It’s been more than 400 days since the water in Flint, Michigan was declared undrinkable due to stunning levels of lead contamination, so it’s estimated that at this point as many as 12,000 children have been exposed to the lead-tainted water due to a decision, it’s a crazy decision, made by the state and city officials to switch the source of Flint’s drinking water from the Detroit River to the Flint River. While most of the media has long since stopped covering this story, the crisis continues. Joining me now to talk about this, how bad it is in Flint, and where we go from here is environmental activist and consumer activist, probably the most important environmental activist in this country, I would go as far as saying. She’s involved in it every day from the very beginning. Erin Brockovich, thank you for joining me.

Brockavich: Hey, you’re welcome. How are you, Mike?

Papantonio: I’m doing well. Everything about this case is startling, but let’s start with the most horrendous facts. First of all, the EPA considers that 15 parts per billion of lead in drinking water is harmful, but people in Flint were drinking water with 13,000 parts per billion of lead contamination. How does that happen? How did we get there?

Brockavich: Oh my gosh, you’re asking a question that could take the entire show to talk about. Listen, I’m known to say a lot of hard things about the EPA, and there’s some really good people inside that agency, but that system is broke. They are not where they’re supposed to be. They don’t have enforcement. They’re overburdened. They’re underfunded. They’ve been neutered, and we have about 110 sites as bad, if not worse, than Flint we’re trying to deal with right now, so the fact that they’re absent shouldn’t surprise us. I know it surprises many people, but the system and the agency is just broken.

Papantonio: If I understand the science here, Erin, it’s that 13 parts per billion of lead builds up in the kidneys, and the bone, and the bone marrow, and the liver, and in the brain, so once it’s there, how do you ever get rid of it? I mean these people, do they have to live with this the rest of their lives, this contamination?

Brockavich: Well, it’s very difficult, especially with children. As we all know, lead and children don’t go very well together, and that is the biggest concern. There can be chelation programs. Your doctors look at it, different types of medicine, on what you can do to rid the body burden of the lead, but not knowing the full outcome. We know that lead poisoning in children can cause delays in developmental, and it’s of concern to the families, so it’s a question unknown. Nobody should’ve been drinking lead at that level, and it was a huge cover-up. I think of my work in Hinkley, California, that certainly taught us that hexavalent chromium can get into the water supply and harm the public health and welfare of others. Flint taught us that as well, but it also showed us something that we’ve known that we don’t like to talk about very often, and that is cover-ups within state and local agencies.

Papantonio: Well, as I look at the documents in this case, and I review it, it is clear that they gamed the system. I’m wondering, the review of the case shows that mostly African American population was forced to drink the water. They began experiencing rashes, and hair loss, muscle weakness, pain and tingling in the arms and down the legs within a matter of months. Now, the government knew this. This wasn’t a surprise. Doctors were reporting this is what we’re seeing, and you had Rick Snyder covering this up every chance he got to say there’s no problem here. Look the other way. The water’s just fine. You had him at the helm making sure that that was the story out there. Did I get that right, or am I overstating it?

Brockavich: No, you’ve got it right. There was a lot of cover-up going on. Listen, we called Flint out a year before it even became the story that you are all watching today. We wrote a proposal for them on what not to do to prevent this type of problem, and we were basically told to go to hell, and that’s the truth, so there was a cover-up. This has been frustrating for me in my career for the past 20 plus years. In every location, and we’re throughout the United States, whether it be a health department that does a test and doesn’t report a test, or a state agency that puts something in a box, somewhere within their hands this information is never moved forward, and then we end up with the kind of disaster that you’re seeing in Flint.

Papantonio: Am I also correct, Erin, that the boneheads, I don’t know how else to put it, I mean the incompetence is amazing, that the people running the solution to all this were telling people, and I want to make sure I got this right, they were actually telling people if you boil the water, everything’s going to be okay? Give us a sense of how ridiculous that is with something like lead contamination, just so the public can understand what a clown car it was up there handling this from the very beginning.

Brockavich: Well it’s actually really scary to look at the people that were handling it, and they were just interim, if you will. The whole reason this happened was to save a buck, and we got to stop doing that in everything that we look at, whether it be through the government agencies or a corporation. To save a buck you cause a lot bigger problems down the line, and water, you have to understand the chemistry of water. Most people do not know that there are no two bodies of water anywhere in the world that are the same, so different bodies are more corrosive, their pH is different, they respond to chemicals different, and telling anyone to boil lead would know that’s not what you’re supposed to do. You cannot give misinformation like that. You can make a situation worse, and we must understand the complexity and the chemicals of what we can and won’t do when we’re playing around with water, and they had some of the lowest level operators possible that should not have been in charge of that whatsoever.

Papantonio: Erin, you’ve been involved in, I think, in some of the most important environmental cases in this country, and when I say you probably are one of the most important environmental advocates we have out there right now, I want your comment on this. As you watched this develop, you were ahead of it by a year, did you see a government, Rick Scott, and the cabal of scientists and bureaucrats working under Rick Scott, intentionally go out and try to say that this contamination never existed?

Brockavich: I’ve seen that in many instances where science is often self-reported and can be rigged. I know that we can get accused of that sometimes. I had a scientist say to me recently, “Well you don’t have the data,” and I’m like, “You’re right, maybe I don’t, but here’s what you don’t get, neither do you,” and oftentimes they will come in, and I’ve seen firsthand where they will alter information to get an outcome that favors them.

Brockavich: You meant Snyder. I know who you meant.

Papantonio: Yeah, as Snyder took control of this, did you see a pattern, and was the pattern to tell the people working underneath him to try to minimize the importance of this, don’t tell the public, let them drink the water between 2014 and 2015 without giving them the chance to even make a choice, even make a choice of whether they wanted their children drinking this or whether they wanted their family drinking this water? Did you see Snyder ever do that?

Brockavich: We’ve seen a lot of stuff going through the chain of information that came out, and it’s just going to get blamed on the lower-level ones, but we see throughout those reports all the way up to that office that they knew something and they had something changed, or they disregarded something, and just like I’ve seen in Hinkley and every other case, somebody doesn’t want that information to come out. It gets passed off to someone else, and I don’t know. It goes away, and the data gets changed.

Papantonio: In 30 seconds, I guess this question is the stinger, and that is, is there any quick solution to this, or are these folks going to have to live this for a long time? About 20 seconds.

Brockavich: They’re going to have to live this a long time. There is no quick solution. The best thing we can do is empower them, to educate them, become aware, get them filtrations at their tap so they can protect themselves, because it’s not a quick fix.

Papantonio: Erin, thanks for joining us. Thanks for being out there, as you usually are in big cases like this.