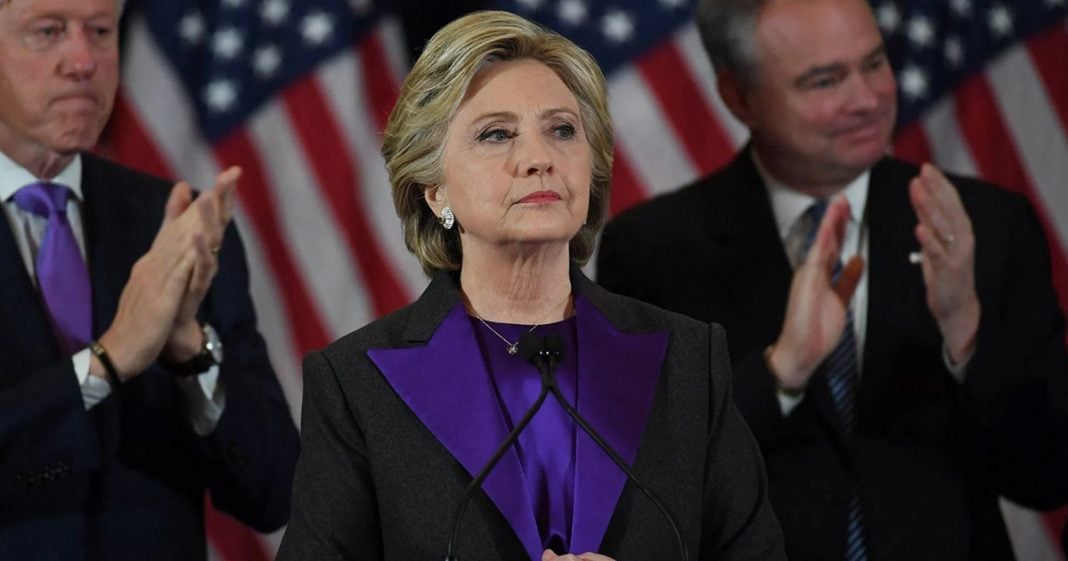 Media outlets are still talking about the fact that James Comey cost Hillary Clinton the election, but they’re also touting the fact that Hillary won the popular vote by almost 3 million votes. How can someone cost Hillary the election if she technically wins more votes? Something doesn’t add up, and the logical conclusion is that this is still the Democratic elite trying to blame their pitiful performance on anyone but themselves. The Ring of Fire’s Farron Cousins discusses this.

There are some conflicting stories coming out of, I guess you’d call it the liberal media, right now. It’s really not so liberal as much as it is corporate news in disguise. Regardless, the story is that, one, Comey with the FBI releasing the thing in October saying they were going to reinvestigate Hillary Clinton, or something to that effect, which turned out to be nothing. They’re saying that that is what cost Hillary Clinton the election. After all, before that announcement, she was ahead in the polls. After that, she started to fall. Then right next to that, they post an article saying that Hillary Clinton won the popular vote in the United States by almost three million votes. The question I have is, how are both of those things possible? How can someone cost you an election that you still technically win? That doesn’t make sense.

Now I understand the electoral college is the problem here. They’re the ones who gave Trump the votes to push him into the presidency, but Hillary Clinton did win the popular vote in spite of what James Comey released with the FBI, in spite of the DNC hacks. Hillary Clinton still won the majority of American voters, so the only conclusion that really makes any sense for why she would lose the electoral vote is because she ran, her campaign ran a horrible campaign, and you can’t lay all the blame of that on Hillary Clinton herself.

Obviously, the candidate doesn’t necessarily call all of the shots. She has campaign managers like John Podesta, and Podesta, who is just an idiot, for lack of a better term, ran a bad campaign for her. They didn’t go to Wisconsin. That’s probably the dumbest political move that any politician, left or right, could make in this current political climate. Wisconsin has been in the news for the last six years, if not a little bit longer, for the whole Scott Walker mess, trying to kill unions and kill public education and do all that. That was the Koch brothers’ laboratory, and she didn’t even bother to go there. Her advisors didn’t say, ‘Hey, it might be a good idea for you to go over to Wisconsin.’ That’s just plain stupid, and she lost Wisconsin by 18,000 votes, 18,000. That’s not a lot.

If she had spent more time, if her advisors had pushed her to get out there and talk to the public more than she was talking to private donors behind closed doors, things would have been different. Yeah, Comey still would have released his thing. It would have cost her some voters, but she would have gained so many more by putting herself out there. She had some really great ideas that were buried in her website that the majority of people didn’t go to because it’s the candidate’s job to explain their policy positions, not tell people, ‘Hey, go to my website and read about this later. I got to go meet with these donors.’ But that’s what she did, because that’s what her advisors allowed her to do.

The Democratic Party is plagued with these horrible advisors. John Podesta, Bob Shrum, Terry McAuliffe, people like that, are awful. It’s time for them to go. Podesta absolutely is an idiot. Bob Shrum is an idiot. They don’t know how to run successful campaigns, and that ultimately is what doomed Hillary Clinton. Did Comey play a role in it? Yeah. Did the DNC hack play a role in it? To an extent. But nothing hurt Hillary Clinton more than her failure to go to these Midwest states that could have easily flipped to blue and tell people that she was on their side. That’s what cost her the campaign.