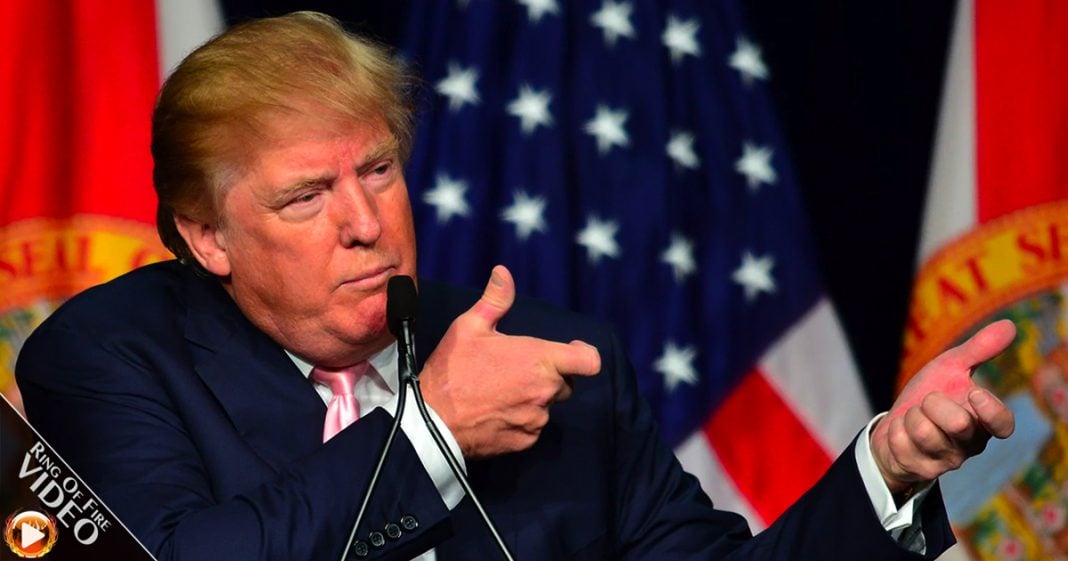 The man who consistently skips his daily intelligence briefings is telling us that he can and will wipe the “terrorists” off the face of the earth. Tough talk from a man who can’t take any criticism on Twitter. The Ring of Fire’s Farron Cousins discusses this.

In response to the attacks in Germany that have killed upwards of 50 people, Donald Trump, ever the tough guy, promised American citizens that no matter what, during his presidency, he was going to wipe terrorists off the face of the Earth. Of course we will do this along with our quote freedom loving allies. Now really those are just a lot of buzz words. Donald Trump’s trying to capitalize on this tragedy that took place in Germany. And he’s doing it the only way he knows how. By lying to people. By making promises that he couldn’t possibly fulfill.

Look, for Donald Trump to come out and say that he’s going to wipe terrorist off the face of the earth, think about the fact that this man can’t even take somebody criticizing him on Twitter. So how in the world is this tough guy going to go out there and wipe terrorists, terrorism, off the face of the Earth? Furthermore, since he only used the word terrorists without specifying anything else, does that include all the right-wing crazies in the United States? People like the Bundys? The people that go out and shoot up black churches? I wonder because that’s terrorism, Donald. Furthermore, you’re not gonna be able to wipe terrorism off the face of the Earth. If anything, according to the experts, you’re going to help it. Just like George W. Bush did when he enacted all of the US torture policies that emboldened al-Qaeda, Donald Trump’s election is doing the same thing to ISIS. They’re using him as a lightning rod. His statements about Muslims and barring them from even coming into the United States, they’re using that as recruitment tools. Donald Trump has been featured in an ISIS recruitment video.

Now, I’m not saying that Donald Trump is completely useless on this issue, but if he wants to wipe terrorists off the face of the Earth, let’s just hope that they have Twitter. Otherwise Donald Trump really has no clue how to do any of this. This is guy that is missing, skipping, delaying his daily intelligence briefings. He knows nothing about the issue. He’s cut those briefings down to once a week, yet he still thinks he can help us, he can save us, and the fact is, he can’t.

President Obama did a pretty decent job of keeping the United States safe during his eight years. A lot safer than it was during the George W. Bush years. But again, Donald Trump is an ISIS recruitment tool. He’s a guy who will promise anything to his terrified followers out there in the United States in order to get them to continue to support him. Because that’s what this all boils down to. It’s not about Donald Trump actually wanting to go out there and destroy terrorism, it’s about him promising his very weak supporters that put your faith in me and I’m going to keep you safe.