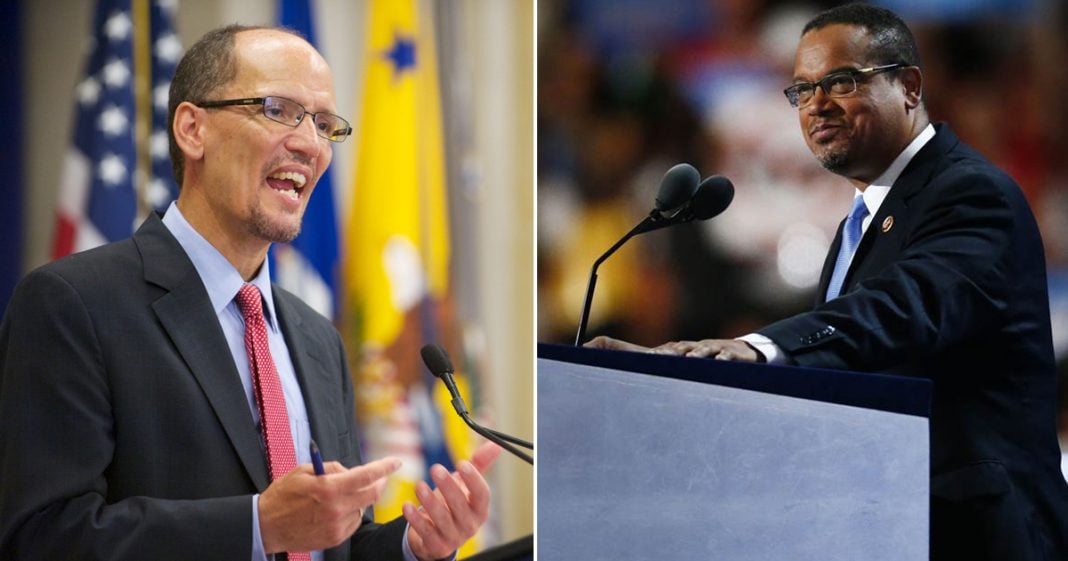 After the debacles of the past three election cycles, many Democrats agree that the party requires much more progressive leadership – and as it turn out, two Progressives are vying for that leadership as DNC chair.

But are they both truly Progressive? How are they different, and how might those differences cause yet another rift in an already fractured Democratic Party?

The first who has come forward to replace corporate blue dog Debbie Wassermann-Schultz is Minnesota Representative Keith Ellison. He is now being challenged for the position of DNC chair by Labor Secretary Tom Perez.

Both of these figures have solid records as Progressives; Ellison, an African-American and the first Muslim to serve in the U.S. Congress, stands up for family planning as well as LGBT rights and has consistently voted against military actions abroad. He is one of the authors of the Credit Card Holders Bill of Rights, legislation that was crafted in order to reign in abuses by credit card companies and signed into law by President Obama in 2009. He was one of the first to speak out against the TPP and has repeatedly criticized Obama for the unjustified and dangerous deportation of undocumented immigrants.

A former civil rights attorney, Ellison is an active social justice activist. He has worked with HIV outreach programs, helping to insure that resources get to those who need them the most. He’s even been arrested during a protest against the Sudanese government’s policy on Darfur. Prior to serving in Congress, he did a great deal of volunteer work in Minneapolis, where the mayor described him as “more a community organizer than a politician.”

In short, Keith Ellison is someone who gets down in the trenches, puts his money where his mouth is, and isn’t afraid to get his hands dirty. And therein lies the difference between him and his Progressive rival, Tom Perez.

Perez, a Hispanic whose family immigrated from the Dominican Republic, is no slouch when it comes to fighting for the little guy. As a county councilman in Maryland, he fought against corporate mergers that would cost jobs and fought for improved benefits for county employees.

As assistant attorney general, Perez worked on issues such as discrimination in public schools as well as police departments, and stood up against voter ID laws designed to suppress and discourage public participation in the electoral process. As Secretary of Labor, Perez as worked directly with business to improve conditions for workers – including calling for a higher minimum wage – and reduce environmental pollution.

Both Ellison and Perez have a great Progressive vision – but when it actually comes to boots on the ground organizing, Ellison is the man with the solid background. Perez knows policy inside and out – nobody argues with that – but Ellison has practical, proven experience.

And, if nothing else, being an African-American as well as a Muslim will stick in Trump’s craw and send his supporters and sycophants into a panty-twisting fit. It’s hard to imagine a better gadfly for the Trump Administration.

President Obama is supporting Perez for the position of DNC Chair – but given the disaster that resulted from his earlier choice as well as his lukewarm support of Progressive causes, his support of someone who after all is a Washington D.Cc insider is questionable at best.

Perez, like corporate Democrats, attempts to bring about change from within the system. Based on the last several years, that approach hasn’t been working out so well. Meanwhile, Ellison has been unafraid to take on that system from the outside.

We’re in for a hell of a fight for the next four years, and we’ll need someone who won’t hesitate to take the gloves off.

That someone is Keith Ellison.