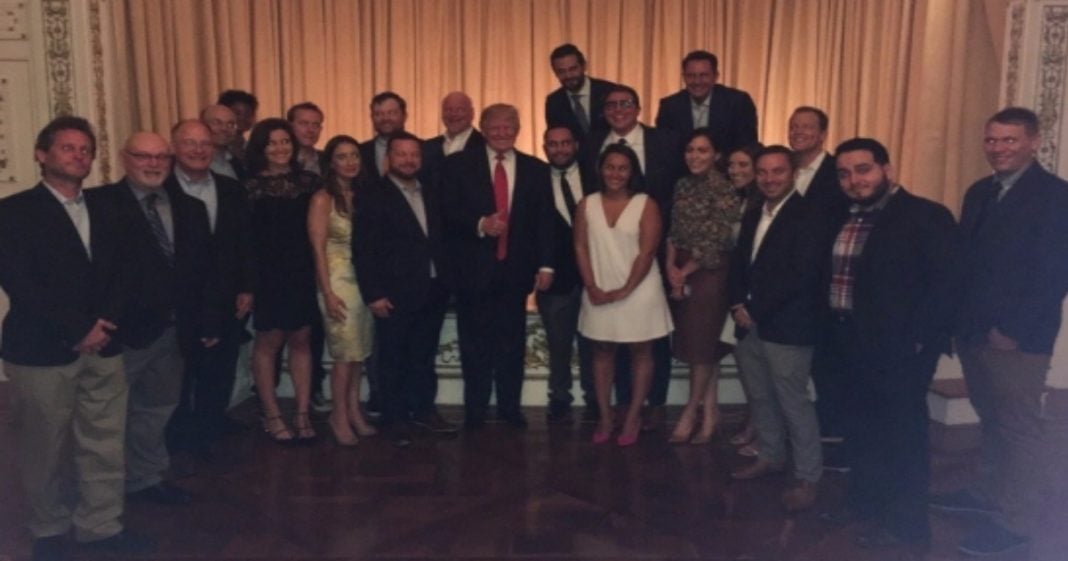 Several reporters who emerged into media spotlight this year by covering Donald Trump’s every move are now facing scrutiny after being featured in a group photograph with the man.

The party was billed as “off-the-record,” but photos were allowed and even encouraged – a sign that every once in a while, Trump is a bit of a genius.

It’s as simple as this: in an increasingly questionable media system – and when Americans trust members of the media less every day – Trump has tricked those same members of the media into attending a ritzy party, posing in smiling photos with the demagogue who they often claim is “Putin’s lapdog.”

If Donald Trump is Putin’s lapdog, I hate to think what that says about this group. https://t.co/g00MYjeI7B

This is exactly the optics Trump was going for: while he repeatedly insults the media and pens the press into small, targeted corrals as his rallies, they are still eager to dine with the man and drink his expensive champagne.

Despite the fact that Trump has not entertained a single question from the press in months, they were far too eager to attend this party. In fact, it has been 146 day since Trump held a press conference, but you wouldn’t know it from the smiling faces at Mar-a-Lago on Sunday!

How can we depend on our press to stand up to Trump and call him out in the most difficult time in our Democracy if we can’t even depend on them to say, “thanks but no,” to a party invitation from the dangerous demagogue. Is that really too much to ask?