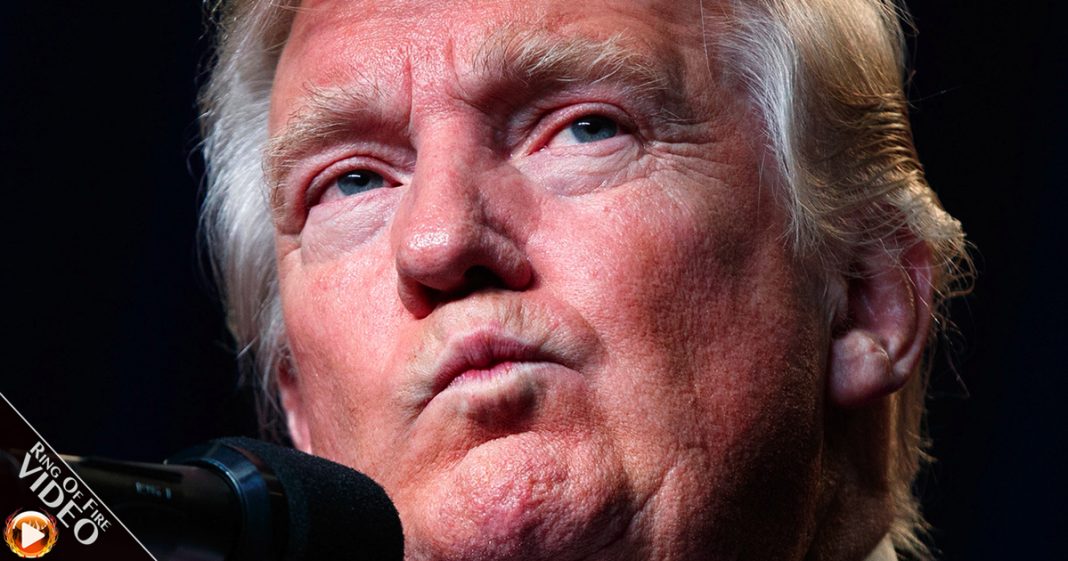 A group of psychiatrists have sent an open letter to Barack Obama about Donald Trump’s mental health, pleading with him to seek help. They believe that his outbursts and behaviors indicate some sort of mental instability. And they’re probably correct. The Ring of Fire’s Farron Cousins discusses this.

A group of psychiatrists … more specifically, professors of psychiatry … have sent an open letter to President Barack Obama begging him to please take a second look at Donald Trump, because these psychiatrists believe that Donald Trump is displaying too many symptoms of mental instability. One of the scientists who wrote this letter hails from Harvard; the other two from the University of California at San Francisco. Basically, what they’re telling President Obama is that, look, when you add everything together about Donald Trump … the grandiosity, impulsivity, hypersensitivity to slights or criticism, his willingness and quickness to levy threats against anyone who disagrees with him or questions him … these are all symptoms of mental instability.

This is coming from people who understand this issue better than most. And to be honest, I don’t think there’s too many people actually watching this video who wouldn’t agree with that assessment. There is something wrong with Donald Trump. Perhaps it’s just the affluenza. Perhaps it’s the fact that because he’s been given everything in his life, every single thing he’s ever wanted, which now includes the Presidency, he doesn’t know how to handle it when someone disagrees with him. But it goes further than just that mental/emotional immaturity. There is something, according to these psychiatrists, likely diagnosable wrong with Donald Trump. Maybe it’s narcissistic personality disorder, maybe it’s something a little more severe, maybe it’s full-blown sociopathy, but there’s something wrong with the man.

According to these psychiatrists, his mental instability should bar him from becoming President. Now when we look at what the constitution says, the rules of President, rules for impeachment, not being able to carry out the functions of the Presidency is something that can be used to remove a President from office. If Donald Trump honestly does have some form of mental instability, a mental illness, that would bar him from being able to faithfully execute the office of the President. And that’s what these psychiatrists are trying to warn us about. It’s not meant to be funny. It’s not meant to be a jab or an insult to Donald Trump. There’s legitimate concern there. Something is wrong with this man. And it’s not just that he’s going to be a bad President; it’s that he’s going to be a dangerous President.

You can’t trust someone like Donald Trump with the nuclear codes. You can’t trust someone like Donald Trump, who has the full extent of the United States military at his fingertips. He can issue a drone strike without the approval of Congress. If he says, “Go,” they go. That’s what these psychiatrists are worried about, because we’re already seeing Donald Trump fail the foreign policy test because of his arrogance and narcissism. It’s going to be so much worse when he actually takes office and has power, and that’s what these psychiatrists are warning us about. That’s what they’re telling President Obama, but unfortunately at this point, I don’t know that there’s anything that President Obama can do about it. But hopefully, maybe, maybe some people in Congress are paying attention to this letter. Maybe they want to bring in these psychiatrists to testify in an impeachment hearing saying that President Trump is not able to faithfully execute the office of the President. If I’m a Democratic Senator or Congress member, I’m printing out this letter and I’m keeping it in my desk because the second this man is sworn in I’m calling these psychiatrists in to start with impeachment hearings.