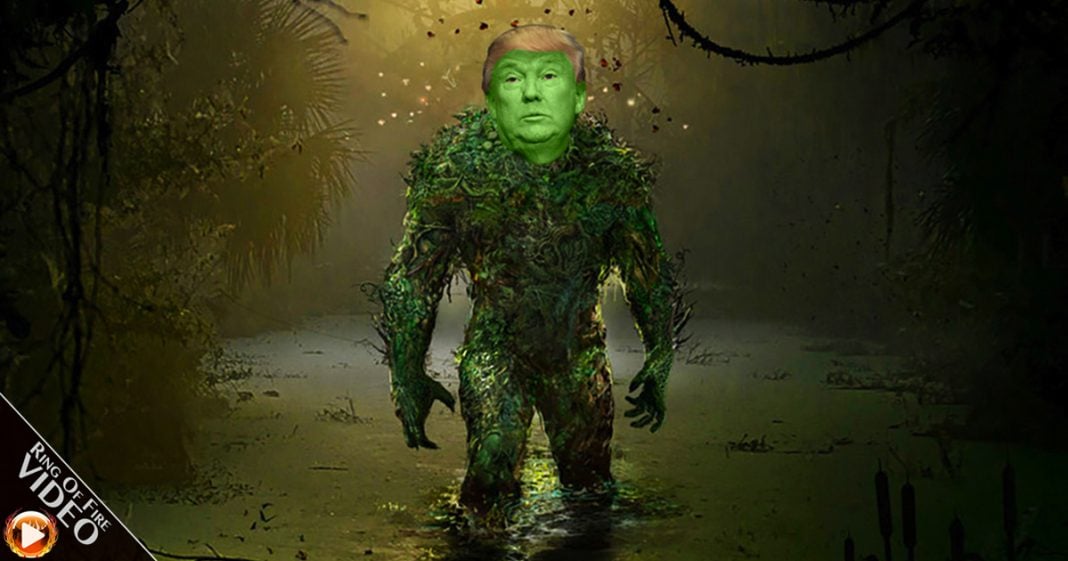 Donald Trump promised to drain the swamp when he came to Washington, but his supporters clearly didn’t know that he meant he’d drain it directly into his cabinet. The Ring of Fire’s Farron Cousins discusses this.

When Donald Trump promised his supporters that he was going to drain the swamp, they didn’t realize that he was actually going to drain it directly into his Cabinet, but that’s what we’re seeing with all of his picks. Not only is this actually the wealthiest Cabinet in history, but it also looks like it’s going to be the most corrupt and incompetent as well. Start with Rick Perry, now this is a guy just a few months ago, he’s on a reality TV show competition. Now, he’s going to be in charge of the Department of Energy. It’s the same department that this intellectual cripple couldn’t remember the name of when he was trying to list the departments that he wants to completely eliminate. You have Scott Pruitt who’s going to head the EPA. This man spent most of his professional life fighting against the EPA safeguards, so that polluters and frackers could destroy our planet without any fear of the Government looking over their shoulder, to make sure they weren’t poisoning people.

The list goes on and on. Anyone who ever spoke negatively about a Government agency, hey, you now get to run that very same agency. That’s how things work in backwards ass Trump land. Qualifications don’t matter. You just have to be loyal to Donald Trump and you get rewarded. Things have gotten so bad with this cronyism, that even Sarah Palin came out, and said that Trump voters had been duped by his promises to drain the swamp. Now you know things are bad when you actually start agreeing with what Sarah Palin said. To be honest, we’re seeing this among a lot of Trump voters. They’re saying, ‘Oh my God, what have I done? I didn’t know this was going to happen. He told us he was anti-establishment. He wasn’t going to follow the same rules. He wasn’t going to follow the same playbook. He wasn’t going to do the same thing that all of the other Presidents had and pack his Cabinet full of cronies. Oh God, we got conned.’ Well yeah, you vote for a conman, you’re going to get conned.

That’s not even what’s important here. What’s important is that these Cabinet positions, these people who are going to be making rules for these agencies, there’s not really a check on them. They get to make rules, and then those rules get enforced. Now, State Attorney Generals can sue, stop the rules, that’s what Republicans have done under Obama. The Supreme Court, if the case makes it that high, they can block it. Congress could pass a law to stop them, but those are both controlled by Republicans, so that’s not going to happen. These people are going to have unilateral power over the departments and the industries that they’re going to be regulating. That’s terrifying. Rex Tillerson as Secretary of State? What the hell? It’s like we all went to sleep at the end of 2015, woke up at a bad dream that just hasn’t ended yet.

Trump himself is bad enough, but then when you put in this cast of characters who have no idea what the hell they’re doing, I can’t even say that it’s going to be a rough four years anymore. It’s going to be a disaster for the next four years. A disaster that’s probably going to take a generation to cleanup. Especially in terms of climate change. The damage they’re going to do is probably going to be irreversible. The damage that somebody like Ben Carson could do with Housing and Urban Development, that will take years to fix. I don’t know what to tell you Republican voters. You got conned and you didn’t even know it.