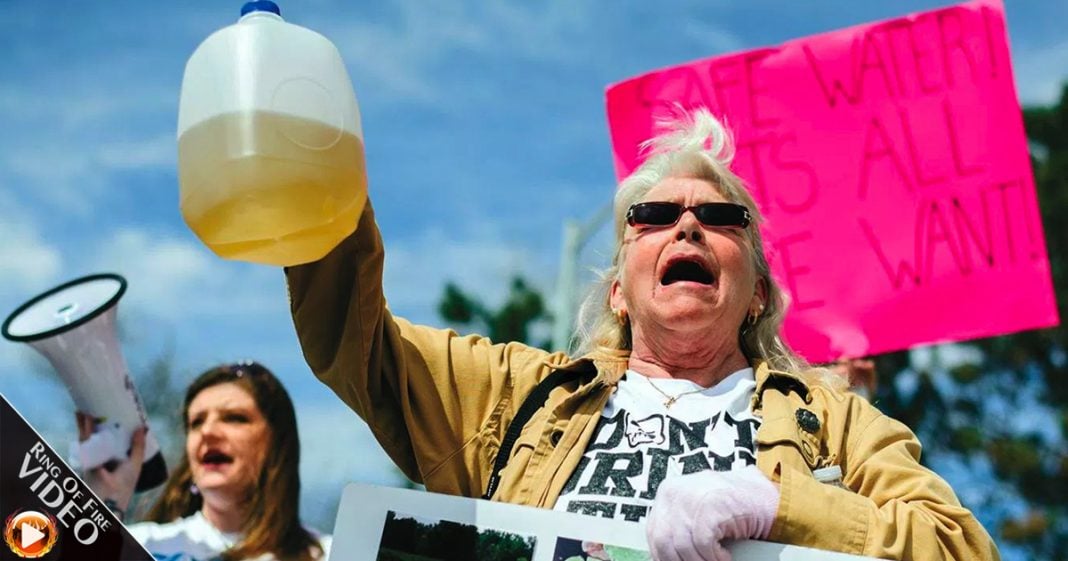 The Flint, Michigan water crisis was brought to national attention a little over a year ago, and still today residents do not have safe water to consume. This crisis is the result of Republicans wanting to run the government like a business. The Ring of Fire’s Farron Cousins discusses this.

It’s been a little over a year since the water crisis in Flint, Michigan actually came to national attention, but the crisis in the city has actually been going on for far longer than that, and still today, more than one year after we first learned about it, there seems to be no relief in sight for citizens in Flint, Michigan. As of today, right now the water coming out of the tap is still unsafe to drink. While officials in the city have told residents, ‘Just boil it, boil the water to get the lead out,’ many citizens understand that you can’t actually boil away heavy metals like lead.

Last week Congress did pass a 170 million dollar aid package for the city. Obviously that has not yet been delivered and once it is it’s going to be a big cluster of how to actually administer that relief aid, but the biggest problem with Flint, Michigan is republican governance because the entire crisis began when the Governor of Michigan decided he wanted to run the city of Flint like a business instead of as an actual city. When the city decided to switch the water source from the Detroit River to the dirtier river, they did that because it was going to save a couple hundred thousand dollars a year.

Now, the manager that they outsourced this job to, private individual, private company, ended up charging the city as much as they saved from switching the water over, so there was no financial savings and rather than install the proper filtration system for the water, they decided to just run with it and poison the entire city, but that was by design. The republicans who ran the state absolutely knew what would happen, they knew they were going to poison these citizens and they still chose to do it because on paper it made them look like they were saving money and cutting the budget, and that’s what you get with republican rule. That’s what republicans want to do. They want to do this all over the country.

Just like we’ve seen elsewhere, Flint, Michigan is a test case. It’s a test case to see if they can get away with it, if they can pull it off, and then if they can, they start doing it in other places. It’s like the Koch brothers when they decided that Wisconsin was going to be their little laboratory to see how badly they could screw things up and screw over unions and install these Tea Partiers. Then, they spread that elsewhere after they saw that they could have huge success in states like Wisconsin. That’s what’s happening in Flint, Michigan. We still have hundreds if not thousands of areas across the United States where the drinking water contains unsafe levels of lead, and we’re not doing anything about it.

It’s great that Congress has passed this 170 million dollar aid package to Flint, Michigan but what about all the other areas in this country? There are areas in the state of Alabama where the water is actually more contaminated than it is in Flint, Michigan. This is not only a government failure, this is a corporate controlled media failure because where are the stories about that? I’m not trying to downplay the plight of the citizens in Flint, Michigan, what’s happened to them is absolutely disgusting, but it’s not even the worst case in the United States. As I mentioned, cities in Alabama, cities within 30 minutes of where I’m sitting right now have worse water than the city of Flint, Michigan.

Where I am sitting right now, city of Pensacola, Florida, for two years in a row we were voted the worst drinking water in the United States. Where’s the aid? Where’s the coverage? Where’s the outrage? The selective outrage of the corporate media disgusts me because we should be talking about Flint. We should have been talking about Flint every single day since we’ve learned about it, and after we finish talking about Flint, we need to talk about these other places, too, because there are people suffering all over this country because they can’t drink the water coming out of their taps.

It’s either contaminated due to local pollution or faltering water systems, or because the governments’ allowed fracking wells to just go right through the aquifer, trying to get the last little bit of Shell oil out of that area. This water crisis extends far beyond Flint and if we do not continue to talk about it, if the corporate media continues to ignore it and republican politicians continue to let it happen, this problem’s going to spread even further.