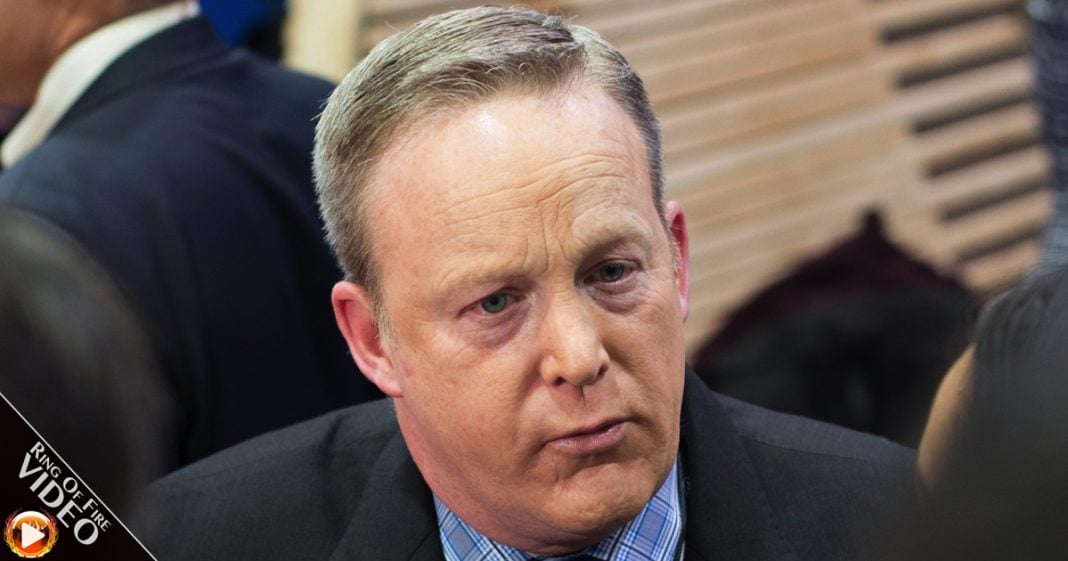 Trump spokesman Sean Spicer told CNN this week that corruption can’t be considered “illegal” if it is done out in the open, so we shouldn’t worry about Trump’s conflicts of interest. That might be one of the dumbest thing that a Trump representative has said this year. The Ring of Fire’s Farron Cousins discusses this.

A spokesperson for Donald Trump by the name of Sean Spicer appeared on CNN this past Wednesday to tell people that, hey, it’s only corruption, or essentially, corruption is only illegal if it’s done in secret. When you do it publicly, when you’re upfront about the corruption, it’s not illegal. Now, that’s kind of paraphrasing what he said, but he did tell us that when you’re not sneaky about it, it’s not illegal. I don’t know if Mr. Spicer understands the law, but I’m going to have to go ahead and assume that he doesn’t. Let me put it this way, if I walk into a bank and I yell, ‘Hey, I’m going to rob this bank,’ I’m being open about it, but that doesn’t mean it’s not still illegal, you idiot. You can’t do that. Being open about breaking a law doesn’t make it any more lawful.

Donald Trump has made it clear that he is still going to retain ownership of his businesses, he is still going to profit off of those businesses, he’s going to profit off of his office of the Presidency, that’s actually why he sought that office to begin with. For Spicer to go out on CNN and say that, ‘Well, it’s not illegal if it’s done out in the open,’ that’s not how the world works, that’s not how the law works, you’re just being an idiot trying to convince people that there is no actual conflict of interest with Donald Trump, or any of Donald Trump’s cabinet members, when there clearly is. These people that Donald Trump has put in his cabinet, and Trump himself, are some of the most corrupt people that we will ever have had to serve in Washington D.C.

It doesn’t matter if they’re upfront about the corruption, or if they do it behind closed doors. Corruption is corruption, and it’s going to help bring down the legitimacy of the Federal Government, and bring down the legitimacy of the United States to other countries around the world. We’re already starting to see a diminishing of the United States’ power abroad. We stayed silent on the Aleppo issue, that hurt us. We could have gone in there and helped, and we didn’t. We’re drumming up these charges against Russia, even though we don’t have firm evidence available yet, the media is picking it up. That’s hurting us, and if it turns out Russia did hack us, and we’re showing that kind of vulnerability, that hurts us. This is a lose/lose situation, because the media and the government has hyped it up so much. And then, when the rest of the world looks around and sees that we put a reality TV star with countless conflicts of interest in charge of our country, that hurts us.

Corruption by any other name is still illegal. It doesn’t matter if you’re upfront about it, it’s illegal, and Sean Spicer needs to understand that before he goes back on television and makes a complete ass of himself, because you’ve got to remember, Mr. Spicer, you’re actually representing the Trump administration. You don’t want to get on Donald’s bad side because then he’s going to tweet at you, and you’re probably going to lose followers, and nobody likes that. But more importantly, just stop lying to the American public for at least one day. Is that too much to ask?