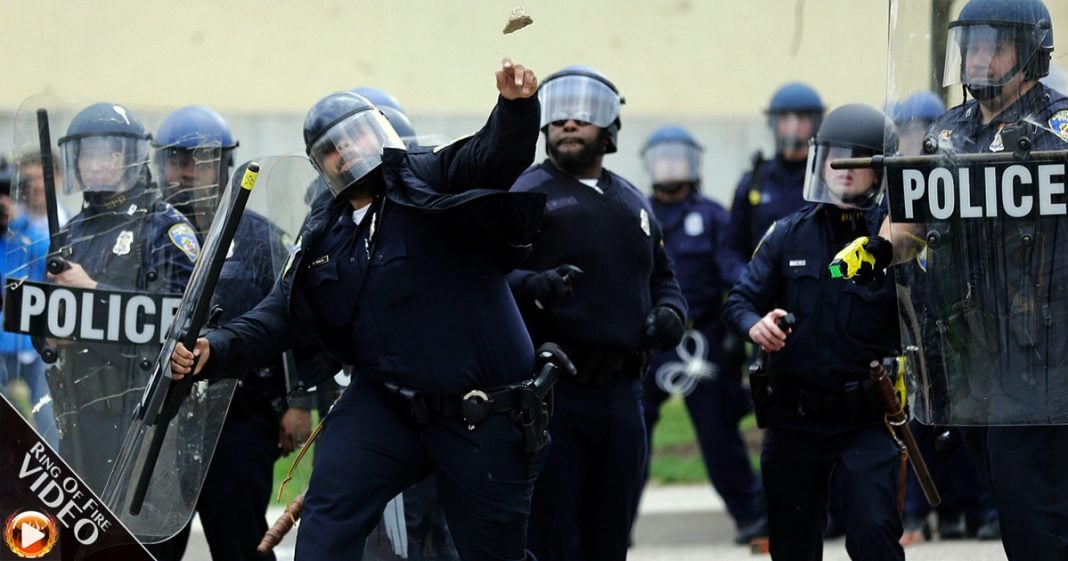 If you’ve been wondering why police officers who murder people of color keep getting let off, take a look at the jury makeup. A new study shows that the majority of these juries are white, and when these all-white juries get the chance, they let killer cops off the hook. The Ring of Fire’s Farron Cousins discusses this.

In the year 2015, 991 American citizens were murdered by police officers. This year, 2016, we’re on pace to essentially meet that same number. We’ve only got a few days left in this year, and we’re already approaching that same kind of number here. Regardless of what you think, some of those, maybe they were justified, maybe these police officers were under duress at the time, you can’t deny the fact that we have seen far too many instances, instances on live video with plenty of witnesses where police officers act unilaterally under no real threat to themselves and decide to take another human being’s life, and as we’ve seen in most cases, it is disproportionately people of color that are murdered by police officers.

The big question is, why do these police officers continue to be let off the hook when these cases actually do go to trial? The answer, according to a new piece on the Huffington Post, is because these cops usually tend to get sent to trial with an almost all white jury. Of the 13 police death or police killing incidences that have gone to trial since 2014, 11 out of those 13 have been decided my majority white juries, and that doesn’t mean that the state or area where they came from was majority white. In fact, many of these have an African American population almost at 50%, yet many times only had one or two or sometimes no African Americans present on this jury.

I think basically the summary of this Huffington Post article, this new study, showing that these white juries are really hesitant to convict a white police officer of murdering a black person, I think it shows the psyche of a lot of white people in America. I think that racism, even among people who don’t think their racist at all, still runs too deep in this country. We’ve seen it too many times. We see it on social media. Whenever something like this happens, these non-racist people always come out and say, ‘Well, if you didn’t want to get shot, you shouldn’t run. If he ran, he obviously was doing something wrong.’

It’s not all cops. It’s not even most cops. It’s not the majority of cops. It’s a few of them, but those few are giving everybody else a bad name. They like to say, ‘It’s just, oh, it’s just a few bad apples.’ The rest of that idiom is that a few bad apples spoil the bunch. We need to seriously have some introspection here. We need to look at ourselves and find out what’s wrong because this is ingrained racism that a lot of people don’t even realize that they have. These white people on these juries who are so unwilling to question the motives of a police officer because he killed a black person are disgusting.

We have to know. We have to look at ourselves and we have to say that this is our problem. It’s not their problem. It’s not the police problem. It’s our problem, and we have to fix it. It begins with white people. Figure out what your prejudices really are, and I know that’s hard, but they’re there, and especially when you’re chosen to serve on a jury. You leave those at the door. When you see a video of a white police officer shooting a black man in cold blood or choking him on the street, there’s no excuse for that, other than this deeply ingrained racism that I’m hoping will die out in a few generations. Hopefully, our children and our grandchildren are better than we are as human beings because clearly, as this Huffington Post article really points out, we have failed.