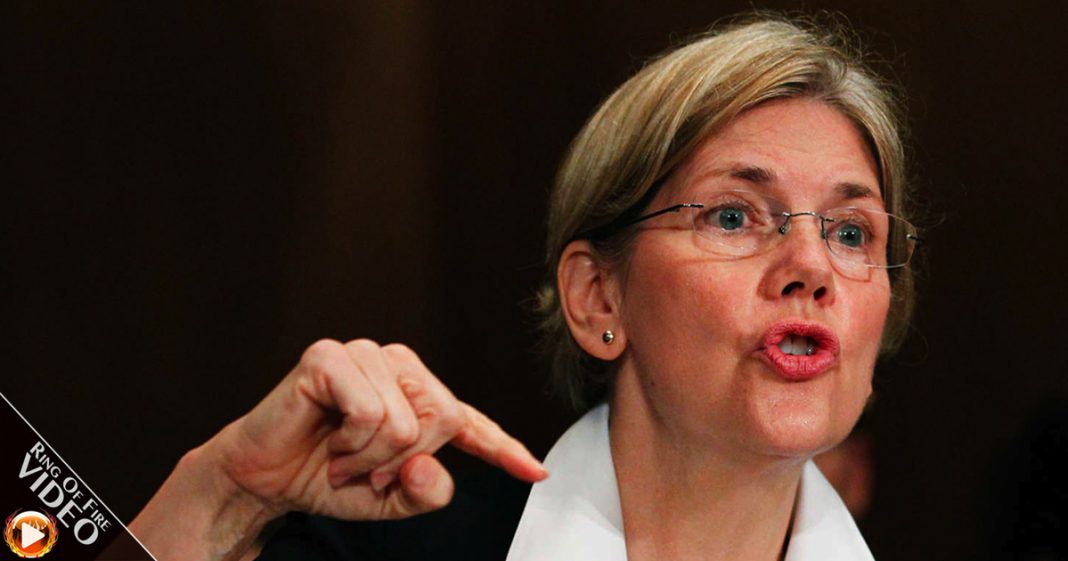 Senator Elizabeth Warren is leading the charge to get Donald Trump out of office as soon as possible by actually trying to enforce the US Constitution. Democrats in Washington are jumping on board, and Trump could find himself in very hot water the very second he takes his oath of office. The Ring of Fire’s Farron Cousins discusses this.

Are you familiar with Article One, Section Nine, Clause 8 of the U. S. Constitution? Probably not, but that’s okay. Because somebody very important in the United States Senate is familiar with that clause, the Emoluments Clause, and that person is Senator Elizabeth Warren. She is hoping to use that clause to essentially either get rid of Donald Trump from Office the second he’s sworn in, or use that to make him give up all of these conflicts of interest that he currently has. Now the Emoluments Clause specifically calls out any kind of gifts from foreign leaders, or anything of that nature. You can’t receive anything. You can’t give anything. You can’t let them stay for free somewhere. You can’t let them use your property for parties and things of that nature, which is actually happening right now.

Elizabeth Warren and several other Democrats in Washington, D. C., have hopped onboard of this now. They’re trying to get Donald Trump. Like I said, they either want him to give up all these conflicts of interest and put an end to it right now, or the more hopeful scenario is, use this Clause of the Constitution against him the very moment that he is sworn in, to go ahead and try to get those impeachment proceedings underway, which really wouldn’t be that hard. Donald Trump is in clear violation of the U. S. Constitution if he continues on the path that he’s on. The day he’s sworn in as President, he would be in violation of the Constitution, which is an impeachable offense.

Now, I know, during the Bush years, and way too much during the Obama years, the word impeachment was thrown around a little too much. Arguably, George W. Bush could have been impeached for lying this country into a war. He did lie under oath, or actually, excuse me. I don’t know if he was actually under oath, but anyway, the whole Iraq War thing. The torture. There were things that could have been impeachable offenses. Barrack Obama, on the other hand, in spite of what Republicans tell you, never broke any law, per se. At least none of the ones that they’re saying he broke, so there’s really impeachable there. Now you could look into the drone stuff, but that’s another story.

Now with Donald Trump though, we have clear violations. He has not moved his business practices into a blind trust, as he is supposed to do. He still has connections to his businesses. He still is calling the shots with those businesses, and essentially profiting off of his newfound political career. You can’t do that. You can’t make a profit off of holding staff meetings in Trump Tower, and then charging the Federal Government for your decision to hold a meeting there, and then you get that money. What is wrong with people? Donald Trump is a man, who wanted to win the White House, just so he could make a fortune, and that’s illegal, but Republicans don’t seem to understand that.

Luckily, we still have people like Elizabeth Warren in Washington, D. C., who understand that the Constitution is still the Law of the Land. I know Republicans like to talk a big game about upholding the Constitution, but when it comes down to practice, they really could not care less about the U. S. Constitution. Trump, certainly, doesn’t care about it. Mike Pence, obviously, doesn’t care about it. Republican voters across this country, obviously, don’t care about it. Elizabeth Warren does, and she is going to use that very powerful tool to make sure that Donald Trump is either out of office, or acts as a normal, respectable, ethical human being, while he is in office.