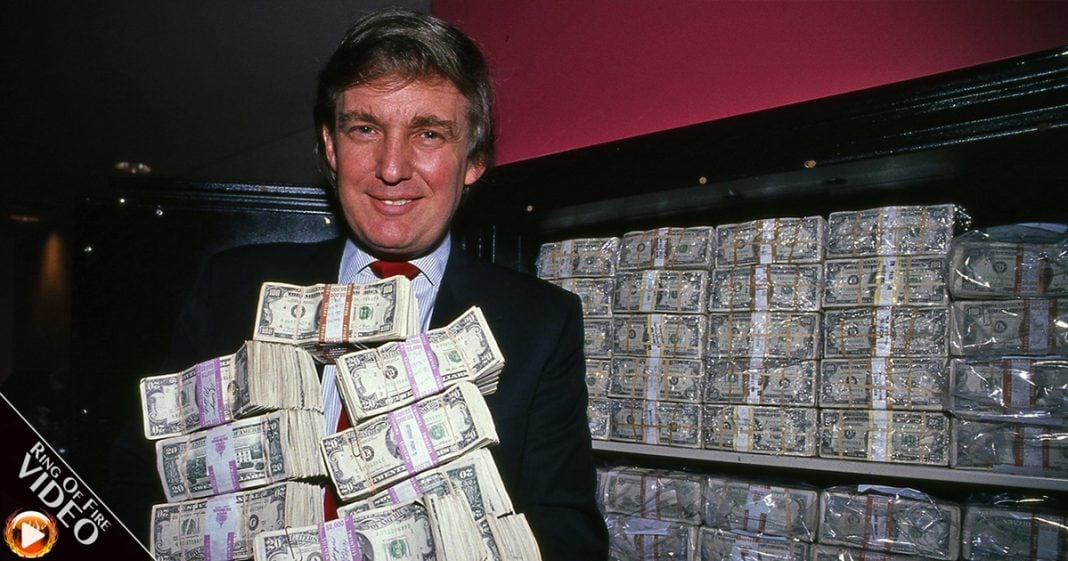 Donald Trump has said that he wants to do away with a myriad of climate protections and regulations, but doing so will actually result in billions of dollars in economic losses, not to mention tens of thousands of premature deaths every year. The Ring of Fire’s Farron Cousins discusses this.

One of the favorite talking points of every single Republican politician to ever run for office in the last 40 years has been this. Regulations kill jobs and hurt the economy. Now you can go back through decades worth of Republican stump speeches and things of that nature, and you will find that talking point constantly. It’s the Republican’s favorite thing because they use that to attack the very government offices for which they are running. Republicans hate government, and they hate government oversight.

Even more than Republicans hate it, businesses hate it. Why? Because regulations cost them a few more dollars every year, and in some instances that is literally the case, a few more dollars every year. That’s why during his campaign Donald Trump promised that he was going to repeal essentially every climate and environmental protection that was introduced or enacted under the Obama administration including the clean power plant rule. Now, fossil fuel industries, other corporations applaud this because again they hate regulations, and a lot of small business owners and Republican voters in general also think that regulations are strangling businesses, stifling the economy, killing jobs, and just overall having a net negative effect on the United States.

My advice for Donald Trump, for Republican voters, and Republican congress people is to actually read something. There is not a single credible study produced in the United States that points anywhere to say that regulations kill jobs. On the contrary, every credible study not funded by industry says that regulations, oh my goodness. They actually create more jobs than could potentially be destroyed by an industry who just was slapped with stricter federal regulations. More importantly, regulations create jobs.

Do you know what happens when one job is created? There’s something called the multiplier effect in economics. For every one job created, three more get created down the line as a result from the increased economic output of that one job. You create ten jobs, you’ve got 30 more coming in the pipeline. You create 100, 300 more coming down the pipeline. That’s what trickle up economics does. It works. It’s been proven. Study after study shows it. If Donald Trump is serious about coming in, repealing the clean power rule, repealing other environmental regulations, he is going to cost this country hundreds of thousands of jobs.

That is actually coming from a new report on thehill.com. Donald Trump’s anti regulatory agenda. The Republican anti regulatory agenda is actually going to cost this country hundreds of thousands of jobs. What does that mean? Obviously reduced economic revenue, but let’s put it in even more specific terms. According to estimates if Donald Trump were to repeal all of the environmental regulations that he wants to repeal, it would result in economic losses in the United States over the next decade of 800 billion dollars. We’re talking about 800 billion with a B dollars worth of lost economic income just from repealing environmental regulations.

You spend 80 billion, you get 800 billion back. I’d say that’s a pretty good investment, right? Whatever you’re spending, you’re getting ten times more back. Don’t tell that to Republicans because they don’t even want to spend that first initial investment regardless of the yield because here’s the thing about corporate CEOs today. The average tenure of a corporate CEO is between three and five years. Back at the beginning of the 1980’s, the average tenure of a CEO was between 15 and 20 years. They actually cared about the company’s long term future not just how much money they can make in the next year or two, and that’s another thing that has helped to kind of change the business mindset about regulations and spending that money today to make it back in a few other days. They’re not willing to do that anymore because they have to make as much money possible in a short as possible, and then take the money and run to another industry.

Donald Trump understands that because he was a business man. He knows what it’s like to grab the cash and run, and that’s all he cares about. That’s why he wants to repeal these regulations, but you know what? It’s actually not just the money that could be saved, it’s the lives. Tens of thousands of people in the United States die every single year from climate related activities linked back to climate change. The economic losses of those deaths are about 95 billion dollars a year. Ninety five billion dollars a year from climate change related deaths. Not to mention what it does to the families and the psychological toll it plays on that.

We’re talking about a life and death situation here with Trump wanting to repeal these environmental regulations. Is it worth it? No. It’s not worth the money. It’s not worth the lives. It’s not worth anything, and any average American citizen out there watching this video, unless you’re a CEO of a massive company which I don’t consider you an average citizen at that point, you should be against this. It will cost you more money. It’s not going to create energy independence in the United States. That’s a lie. We could have energy independence in the United States today if we didn’t ship most of it overseas or stockpile it for later use, or if we utilized the full potential of renewable energy sources in the United States.

We can’t drill any more than we already are because we don’t have the manpower and the physical resources needed to continue drilling. We could have energy independence like Republicans talk about. We’re just not willing to go the renewable route with it. There are jobs to be created with the federal regulatory agencies. Well paying jobs, I might add. Well paying jobs that offer a lot of training. Even if you have no idea of what you’re doing, they’ll get you up to speed. Then we have the ripple multiplier effect from that, but Republicans just don’t get it, or they just don’t want to get it. Economics is hard. Trust me. I know, but when you break it down into simple terms, everybody can understand this. Regulations create jobs and are good for the economy. Anyone who tells you otherwise is lying to you.